This week, Zach and Vince check in with “Beast Children” and “Zipman.” If you have thoughts on these or any other current Shonen Jump titles, please let us know in the comments! 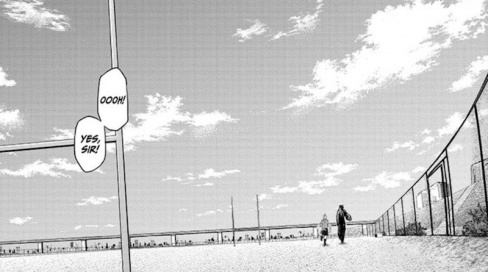 A little less “We Are the Champions,” a little more “Another One Bites the Dust,” “Beast Children comes to an early end this week. This ending comes shortly after the demise of contemporary series like “Yui Kamio” and “Double Taisei,” suggesting it’s pretty difficult for the newer batches of Shonen Jump titles to gain traction against the likes of more established titles and breakout successes. Still, Terasaka tries to make the most of the truncated run by saying something sweet about rugby and humanity.

The chapter alternates between a scrum in the present day and a flashback conversation between Sakura and Ikki, shortly after Sakrua fell onto the rugby field as a child. The scrum is used as a visual metaphor for things like “moving forward” and “supporting the unit.” Ikki explains the essence of rugby as “colliding with intent,” working with all kinds of people across lines of race, class, personality and ideology. For the cynic, it’s a saccharine sentiment propped up on a sports metaphor. Nevertheless, I think it rings rather sincere in a time so marked by disunity, hate, and fear. Shonen manga is inherently meant to inspire young readers, and “Beast Children” hits all the right beats in that regard.

“Beast Children” was never quite able to make the story of rugby engaging in its short run. Furthermore, Sakura’s blind enthusiasm did little to set him apart from other shonen protagonists. However, Terasaka’s line work has been clean and distinguished, making the somewhat static scrums feel tense and dynamic. Terasaka is a talented artist and despite the flaws of “Beast Children,” this last chapter manages to hint at what makes rugby so endearing to its fans and players. I wish Terasaka the best in his future endeavors!

Final Verdict: 6.0 – A heartfelt sendoff for a sports manga that failed to find its footing. 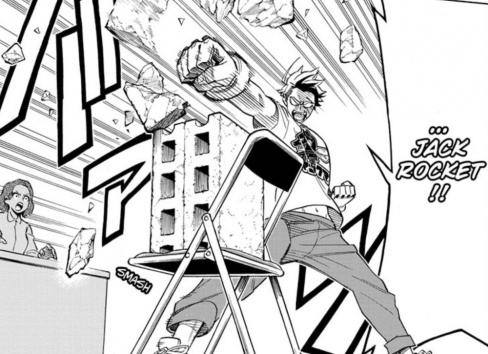 Zipman!! – Chapter 1: You and I Are Jackman
Written & Illustrated by Yusaku Shibata
Review by Vince J Ostrowski

The business of art and commerce being what it is today, it’s tough to be confident in any new manga series being guaranteed to have a fruitfully long run in Shonen Jump, if it isn’t already connected to an established property. With that in mind, it’s with great caution that I say that I could see “Zipman!!” being just the sort of crowd-pleasing book that gains a following and grows long storytelling legs. First of all, the art is fantastic, with handsomely rendered characters who, if they themselves are a bit generic looking, don wonderfully inventive tokusatsu suits and battle giant old-school robots in Tokyo. From the design-work, to the fluidity of the action, to the emotional pulse at the center of the story, the art is top notch. The success of the art in being the heartbeat of a story is wholly underrated when it comes to the manga discourse. In the case of “Zipman!!”, it does an awful lot of the heavy lifting. The very first page features the protagonist, Kaname, making a bizarre face – straining so hard to impress at his audition to be the new Jackman, an Ultraman knock-off television superhero. It certainly makes an impression on the manga reader, but this emotional straining continues to be a feature that shines through the art and adds depth to Kaname as a character. Kaname has a complicated past with his now-deceased twin brother, and a personality that is laser focused on trying to please people all the time. He stresses himself out to his own detriment to try to impress the girl he loves. He trains his body at doing amateur parkour with every free moment he has. He dominates a game of lacrosse for a team he doesn’t even really play for, not because he likes the sport but because he wants to know that he’s helping, because that’s what Jackman would do. All the while, he’s straining himself and frightening the people around him with his intensity. He means well, but doesn’t always come across well, and this idea wouldn’t be fully formed without the art delivering it so clearly to the reader.

But when I think of the most successful Shonen manga of the past, I think of the memorable character designs and “Zipman!!” shows that it has the chops there too. Once Kaname finds himself inside what will surely be known as the “Zipman” costume, the book pits him against a giant robot and starts to really show off. “Zipman!!” the manga is clearly inspired by the old Japanese tokusatsu TV shows of the past, such as the aforementioned Ultraman, but also things like Godzilla and giant robot shows. It’s not solely a love-letter to these properties – I think there are bigger aspirations with the storytelling here than just homage – but it does use the unique feel of these properties to establish its world. When a giant robot stomps through the city near the end of this chapter, it’s like something that stepped out of a Japanese TV set in 1970. It’s humongous, boxy, and simple yet memorable in its intentional lack of detail or accouterments. The “Zipman!!” suit is definitely more modern, like a 21st century streetwear version of a television Kyodai Hero. It’s an instantly iconic look, with a giant zipper running down the front, but a gundam robot head poking out, it feels both homespun and technologically advanced.

I feel like the idea of “fun” as an end-all be-all to what makes a good shonen series is sometimes leaned on as a crutch by comics critics (yours truly included). Being fun should be one of the chief goals of a shonen manga, but it shouldn’t be all a book has to offer. A fully formed shonen series should also have a strong visual aesthetic and characters with clear personalities – the sort that you can see yourself wanting to make a long journey with them. All this is to say that “Zipman!!” possesses these traits too, to the point where there’s really nothing not to like about it. The oversized first installment introduces an unexpectedly complex protagonist with a mysterious relationship to his brother, parts of which are revealed by the end of the chapter, but won’t be spoiled here. It coats that in an incredibly attractive package that features hot-blooded action, earnest humor, and great character design. Just like its protagonist, it wears its heart on its sleeve and goes all out in trying to please you. I can’t imagine it not succeeding.

Final Verdict: 9.0 – “Zipman!!” has a big heart and a strong visual aesthetic, with clear nods to uniquely Japanese styles of storytelling that have come before. It is not to be missed by fans of the shonen genre.