This week, Zach and Robbie check in with “Boruto” and “Yu-Gi-Oh Arc V.” If you have thoughts on these or any other current Shonen Jump titles, please let us know in the comments! 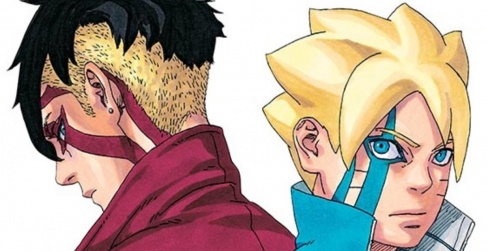 Get excited, the Boruto Reviewer has logged on! That’s right, time to talk about another installment of the adventures of my boy, Bort. Following up on the major smackdown between Naruto and Delta, this chapter serves up a great deal of forward momentum, propelling the story in an intriguing new direction.

With Delta dealt with, for now, our characters once more have a bit of a reprieve, leading to some small but important changes. Earlier in the serious, a teacher/student relationship was established between Boruto and his father’s greatest friend and rival, Sasuke. This highlighted the gap between Boruto and Naruto and is still a promising pairing that will hopefully be built on in the future. Now, interestingly, we’re seeing a similar relationship form between Kawaki and Naruto. It’s clear that Kawaki has a modicum of respect for Naruto. Here, Naruto takes a special interest in Kawaki by leading some of his chakra to operate his new prosthetic arm (more on that later).

This is all interesting for a few specific reasons. Kawaki has been foreshadowed to be one of the series’s central antagonists, at some point potentially harming or even killing Naruto himself. By making him the Hokage’s protégé, Kishimoto and company establish the potential for either a severe betrayal or a significant subversion of expectations.

Furthermore, while this even more clearly establishes a rivalry between Boruto and Kawaki, there’s also the potential for an antagonist pairing between Kawaki and Sarada. The latter has been aiming to be a future Hokage since the series began. However, this newfound respect of Naruto may place Kawaki on his own quest to be leader of Konoha. This possibility is hinted at in the sequence where Boruto and Kawaki trade Hokage cards, as Sarada watches from a far. One more interesting note; in the extended training sequence, Kawaki seems to take the place of Mitsuki as the third member of the main trio. While this is likely just due to the mechanics of this specific chapter, it is interesting to speculate what Mitsuki’s thoughts are on this new body in Boruto’s orbit.

With the “death” of Delta, we get a bit more information about Kara and their dealings. It seems Jigen knows a good deal more about the Otsutski clan than would be expected. The implication that the battle between Boruto and Momoshiki has left a lasting mark on our titular hero casts even more evidence that the series’s flashforward may not be quite what it seems.

The final wrinkle of the chapter deals with the previously mentioned “chakra gift” of Naruto and the appearance of a certain multi-tailed fox. It’s unclear if this is yet another attempt by Naruto to keep tabs on Kawaki. If that’s the case, this invasion of privacy may be yet another straw that leads to an inevitable betrayal. However, it would be much more interesting to give these characters time to grow together, rather than introducing new conflict so quickly.

I’ve made it six paragraphs into the review without mentioning Ikemoto’s art, but this is not meant to be a slight. The artist’s work continues to impress as he makes these characters his own. Particularly, this chapter demonstrates his ability to capture the emotion of joy. Between a shared laugh at Boruto’s expense, the highs of collecting trading cards, and the camaraderie of new friends, there’s a sense of exuberance in this chapter that can be attributed to Ikemoto’s work.

Final Verdict: 8.5 – A solid chapter that packs in a lot of heart, a host of new developments, and hints at exciting things to come. 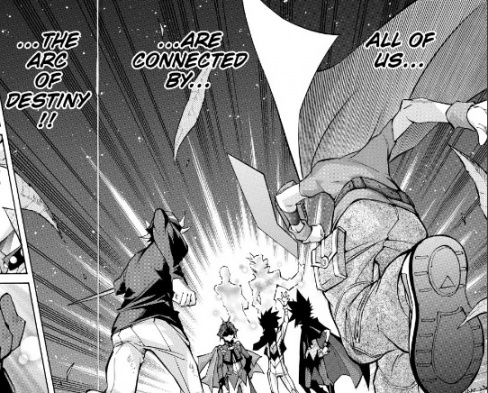 So here we are, with “Arc-V” coming to an end. While the anime was a multiverse-traveling adventure with dimensional dopplegangers and showcasing multiple summoning systems, the manga focused on a smaller handful of characters on a more or less straightforward storyline. With the villain defeated, Yuya and Reiji conclude their duel over the fate of Genesis Omega Dragon.

As the last chapter featured the epic clash of cards that resulted in both players at 100 life points and no cards in their hands or field, this one attempts to make the epic conclusion a matter of drawing the right card, then a footrace for a single Action Card. While the lack of big combos or boss monsters may make it feel like an anticlimax, the subversion of expectations manages to keep it entertaining. Additionally, the personal stakes of the characters comes through in their run towards the card, making it a more symbolic battle than literal.

With the duel concluded, the story must come to an end. As such, there will be spoilers for the conclusion from here on out.

Yuya and Reiji have to return to their time and find the creators of Genesis Omega Dragon. While that could potentially be an engaging and high-stakes adventure, we’ll never get to see quite where it leads, since this is the final chapter. So many of the “Yu-Gi-Oh” spinoff manga conclude earlier than they should to make room for the next series, since the anime moves much faster than the manga can. Unfortunately, any potential future adventures for Yuya will be cut short for the inevitable “Yu-Gi-Oh! VRAINS” manga.

Yuya’s exit is still very nicely done. There’s the promise of future adventures ahead, and the image of him walking towards a gate back to his own time is very reminiscent of Atem’s departure in the original “Yu-Gi-Oh” manga’s conclusion. It’s a positive note, which would wrap up the series on a good note.

Then we get four more pages, and things get a little… awkward. There’s only one way to put it: Yuzu meets the younger version of Yusho Sakaki, Yuya’s father. So it’s strongly implied that Yuzu is Yuya’s mom. Keep in mind that this is after a whole series of building up the chemistry between them, an accidental underwater grope (which honestly felt out of place to begin with) and Yuzu almost confessing her feelings for Yuya before he left.

This revelation casts a very awkward shadow over the series, to say the least.

Putting aside the story, artist Naohito Miyoshi continues to do a fine job with the artwork. The level of shading and detailing has stepped up a level for the final chapter, perhaps due to the lack of giant monster cards taking up most of the artist’s time and focus. Being able to focus more on the characters gives us some powerful moments, from Yuya and Reiji under a starry sky as Yuya rips the Genesis Omega Dragon card apart to the outlines of their families from the futures silhouetted ahead as they race towards the Action Card.

Naohito’s artwork even amplifies the humorous moments. Reiji’s sprinting pose is made goofier by the all-too-serious look on his face, especially with the exaggerated expressions the onlookers are given. Similarly, the serious moments are amplified by the serious expressions and use of action lines. The background work and effects add immensely to each scene, amplifying each moment.

Overall, “Yu-Gi-Oh! Arc-V” came to a somewhat rushed conclusion, wrapping up Yuya’s story nicely but adding a twist that adds an awkward layer to Yuzu’s.

Final Verdict: 7.1 – The conclusion to the “Arc-V” manga wraps things up well enough, but it’s clear that there is room for more if it had the opportunity. Instead, we get some great artwork and a good sendoff, but an odd note to end on.