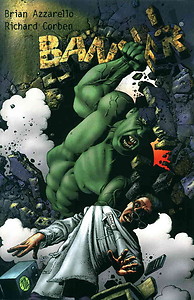 What happens when you take a writer and an artist who are both well respected for their genre work and put them together on a project outside their usual comfort zone? Sometimes you get unexpected greatness, and sometimes you get “Banner”.

What would you do if you were a ticking time bomb? If you’re Bruce Banner – the human counterpart to the 700-pound engine of destruction know as the Hulk – that’s the question you must live with. When you lose your cool, buildings crumble, armies tremble, and people die.
$12.95

This four chapter tale centers on two cat and mouse games: one between Doc Samson and the Hulk, and one between Hulk and Bruce Banner, but neither one is given much depth. After a generic rampage by Hulk, Samson puts an elaborate but anticlimactic plan in motion to finally capture the beast. Unfortunately, it’s only elaborate in hindsight, and the twist will leave you thinking “Really?” instead of “Ah ha!”

Azzarello is best known for his noir work, particularly “100 Bullets”, and you might think his black and gray morality would translate well to a character as conflicted as Bruce Banner. Perhaps he didn’t have space in just four issues, or maybe he had editorial limits on how far he could go, but for some reason, Azzarello’s Banner turns out to be boring. He spends most of his time trying to stay calm, but it lacks any sense of urgency or foreboding. The way some of his dialogue is written, Banner barely seems to care. This general apathy is contagious, infecting Doc Samson, Thunderbolt Ross, and eventually the reader. Hulk leveled a few city blocks? Yawn. Get knocked around in a brawl with Hulk? Shrug. Finally captured the beast? All in a day’s work. Nothing to see here.

Corben’s pencils don’t help sell the emotion, either. He does the best he can with the script he has, but action comics call for a different type and degree of emotion than the horror comics that made Corben famous. Several scenes are rendered in a creepy or unsettling way when the plot calls for no such thing, causing the book as a whole to feel disjointed. And while Corben has proved he can draw monsters with the best of them (see “Ragemoor”), it seems the Hulk just isn’t his type of monster. Instead of looking monstrous, he often appears to be a large, muscle bound baby. One panel in particular looks like Sloth from The Goonies in green makeup. The bright color palette doesn’t help much – Corben’s art is best in grayscale.

As far as bonus features go…there are less than none. The collection (at least the first edition) actually has ads in the back for Echo clothing, a PS2 game, the Risk board game, and an anti-drug ad. Even worse, this four part story retails for the cost of five issues when it was published, and is still a dollar above the combined cover prices for modern comics! Full disclosure: I found this trade in a $5 bin at a con and still feel like I paid too much.

Given the never ending nature of corporate characters, it’s no surprise “Banner” didn’t alter the Hulk mythos in any lasting (or even temporary) way. Still, even the comics not promising to change everything forever should still promise to entertain you, and this one doesn’t even come close.

Final Verdict: 3 Pass. There’s a reason this was in a discount bin.