Marvel promises to go cosmic in 2013, so what better time to look back and see if any of the classic cosmic trades are worth checking out? Tradewaiter breaks away from the traditional one-book review to give you a rundown of Marvel’s best (and worst) cosmic sagas! 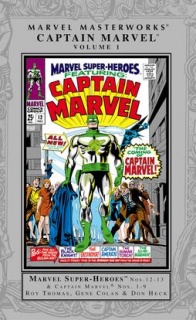 Marvel Masterworks: Captain Marvel Vol. 1-2
Prior to December 1967, various Marvel titles had ventured into space, or had space venture to them. Then, spinning out of the Fantastic Four/Kree encounters from FF #64-65, the House of Ideas put out the first true cosmic book. The lead was an alien, his mission to study Earth and determine if it posed a threat to his race. The first volume collects the first eleven issues of Mar-Vell’s tale, and sets up a complex plot with good characterization and high stakes. The second volume suffers from repeated attempts to reshape the character and boost sales. The changes were anything but subtle, and failed. The series was cancelled with issue 21. While pricey, the Masterwork books are gorgeous things to hold and read. Volume one is a recommended read, but it’ll ends on a cliffhanger which is resolved in the not-as-recommended second volume. These issues are also available in the black-and-white Essentials line. 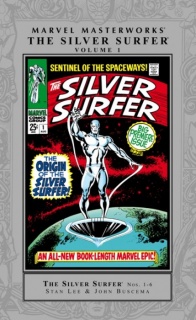 Marvel Masterworks: Silver Surfer Vol. 1-2
The surfer and Galactus were extremely popular after their debut and repeat appearances in the pages of “Fantastic Four,” and Stan Lee used that attention to launch a second Marvel book about a cosmic hero in August 1968. The Surfer is bound to Earth for all 18 issues of this series, but there are plenty of appearances of extraterrestrials. These two volumes collect some wonderfully philosophical stories, but the final page is a cliffhanger which is never resolved, anywhere, ever. You’ve been warned. “Essential Silver Surfer” vol 1 also collects this same material, in black and white at a discounted price.

Marvel Masterworks: Warlock Vol. 1
This collection begins with a recap of Warlock’s first appearances when he was called “Him,” and quickly gives him a new life as Space Jesus to a planet similar to our own. He gathers disciples, challenges the evils of the world, gets crucified, and eventually defeats the villain responsible for everything not good in people’s lives. If Matthew, Mark, Luke, or John were still alive, they’d probably sue for plagerism. Still, the supporting cast is well written, and there are emotional moments which will easily captivate you. It’s also a complete story, with a definate ending. This volume is recommended as a good story, but in the grand scheme of cosmic marvel, it’s very skippable

The Kree/Skrull War
This nine-issue collection of “Avengers” was originally printed in 1971, when Marvel had no other cosmic books on the stands. It has a slow build, re-introducing both the Kree and the Skrulls slowly while continuing other regular Avenger plots. The simmering nature of its early chapters gives the action-filled finale an epic feel. It’s no wonder this arc remains popular to this day. The contribution to the Marvel universe was mostly done in broadstrokes, but ideas introduced in these few issues have been referenced in storylines ever since. “Secret Invasion” based a great deal of Skrull motivations off these a few years ago. The saga was recently reprinted in a nice hardcover format, but there’s also a trade version from 2008, if you can find it. 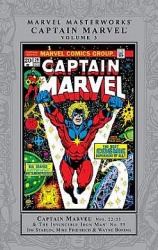 Marvel Masterworks: Captain Marvel Vol. 3
Hitching a ride on the popularity of the Kree/Srull War, Marvel brought this series back under the steady hand of writer/artist Jim Starlin. Amazingly, it was not presented as a sales-grabbing #1! It was ressurrected at #22! This was Starlin’s first shot at writing, and he wasted no time establishing himself as a crafter of immense tales. This volume collects what became known as the ‘First Thanos War,’ when Earth’s mightiest heroes first met the Mad Titan. While continuing from previous Captain Marvel Material and the “Avengers” story, this collection can be read and enjoyed all on its own. Not all the parts of this spanning epic are reprinted here, but you’ll never know you missed anything. Highly recommended for anyone interested in the tales of Cosmic Marvel past.

Marvel Masterworks: Warlock Vol. 2
A few years after his Captain Marvel work, Starlin revived Warlock in the pages of “Strange Tales,” then in “Warlock” #9. (Again without a reboot!) This is the ‘Second Thanos War,’ a tale which was finished but cut shorter than intended due to sales. The narrative is great, but the flow is more than a little fractured by the final two chapters being in different, unrelated titles. Nonetheless, Starlin continued to define the Marvel Universe, cementing this collection as a must-read for fans interested in the Cosmic Catalogue. The material, along with the earlier “Warlock” issues, is available in a black and white Essentials volume.

Essential Nova
In 1976, Marv Wolfman created Nova in an attempt to duplicate Spider-Man, but ended up with a duplicate Green Lantern instead. This black and white volume collects all 25 issues of series. Nova is mostly Earth-bound here, his alien origins neglected until closer to his cancellation. He has an interesting supporting cast, and entertaining villains. While most of his outerspace adventures occur in the Fantastic Four (see next entry), this is a must-have for fans of Richard Rider post-Annihilation. The first half of the series was also made available in a color collection, “Nova Classic” vol 1, earlier this month.

Fantastic Four: The Search for Galactus
When Wolfman’s “Nova” series was cut short, he wrapped up the loose ends in his other book, “Fantastic Four.” This volume is also a stand-alone story, beginning with the team making their way to space and stumbling upon Nova. This is where the concepts for Xandar and the Nova Corps are really developed. While Nova’s fate is left to be revealed in “Rom” #24 years later, this story features the first appearance of Galactus’ new herald Terrax, and the defeat of Nova’s archvillain, the Sphinx. A must-have for anyone interested in Nova’s early adventures, or for fans of the heralds.

That’s it for this week. Check back next Monday for more cosmic, including the orignial Guardians of the Galaxy, Quasar, more Silver Surfer, and others!