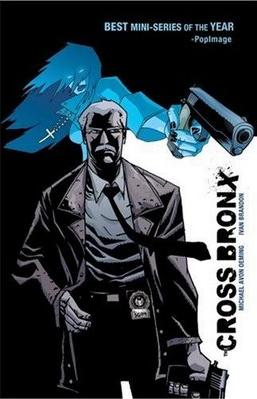 By Michael Avon Oeming and Ivan Brandon
“Cross Bronx” seamlessly mixes police procedure and the supernatural in a story that follows Detective Rafael Aponte as he investigates a mysterious gang slaying that quickly brings him face to face with an unearthly beauty. Taking out her revenge on the city, she challenges Aponte’s faith in the law and his belief in God – or lack thereof.
$14.99

“Cross Bronx” begins with a mass shooting at a gang hangout and the follow up investigation by a couple detectives. As they follow leads, they encounter the murderer: the vengeful spirit of a comatose teenage girl. As they try to find a way to stop her, the narrating detective hamfistedly struggles with his doubts about spirits and his lack of faith in the judicial system. The spine of the book has a “1” on it, but the end of the book doesn’t leave much room for a sequel. That’s not a bad thing.

It’s not clear from the credits exactly how much input into the story either Oeming or Brandon had, but “Cross Bronx” fails to deliver a concise story. The main character never has anything but a superficial personality. He starts off bland, and he remains flavorless despite the story’s attempt to season him with a troubled marriage, conflicted feelings about justice, and a crisis of faith. These facets of his life are presented too plainly to resonate, are so in-your-face they actually make the character even more shallow because no reasons are given for any of these traits by narration or by plot.

The narrative is also overly concerned with Catholicism, so much so that any entire page in the first chapter is dedicated to the main character watching a picture of a saint get wet. Seriously. A whole page. Watching a picture get wet. The significance of the saint, the picture, or the wetness is never clear, because it never comes up again. There’s also a segment where he’s attacked by a cloud of moths which is similarly never put in context. One page he’s attacked by hundreds of moths, the next he’s telling his wife he doesn’t want to go to church. The vengeful spirit also seems unable to harm a rapist wearing a cross, but is able to shoot a nine year old boy in the face.

There’s also a thing with a car crashing which made no sense, but enough with criticizing the plot. There are too many other things wrong with “Cross Bronx” to focus too long on any one of them.

The art contains lots of poor choices. The single worst offense is, without a doubt, Oeming’s presentation of characters. It’s unclear until the third chapter the main character is Hispanic, and then only because it’s in dialogue. On a broader scale, a cursory glance through the book will make you wonder why on Earth they thought using black gutters in conjunction with Oeming’s heavy shadows was a good idea. In several instances the division between panels seem to disappear, making the page look like one big jumbled picture. Other times, it makes panels and their frames vary widely in size because instead of looking like a shadowed wall, it looks like a tiny panel and a one inch wide gutter.

Oeming also uses lots of close up panels showing nothing but a head, followed by an even closer up with nothing but an eye. The constant zooming creates the impression that what’s being said in the tighter shot is more important than the distant ones. Unfortunately, the script doesn’t bear this out. The result is a disjointed flow in an otherwise smooth conversation.

Speaking of conversation, “Cross Bronx” also has lettering issues. While Kristyn Ferretti did her best with what she had to work with, she was hindered by both the black gutters and the constant zooming. Apparently she also had trouble knowing where the panels ended, because there are several pages where the balloons extend out of the panels. In a few instances, the balloons actually appear to be entirely in a gutter. In some of the scenes with the super intense zooms, Oeming didn’t leave her any room for a bubble at all. On one particularly bad page, she has the tail of a balloon in one panel pointing at the speaker in a different panel.

At the end of the collection, there’s a cover gallery and a selection of pinups from a variety of artists. Some of them are quite nice looking, but definately do not justify the extra two dollars you’d pay for the trade over the single issue cover price. Not that I’d recommend paying cover price, either.