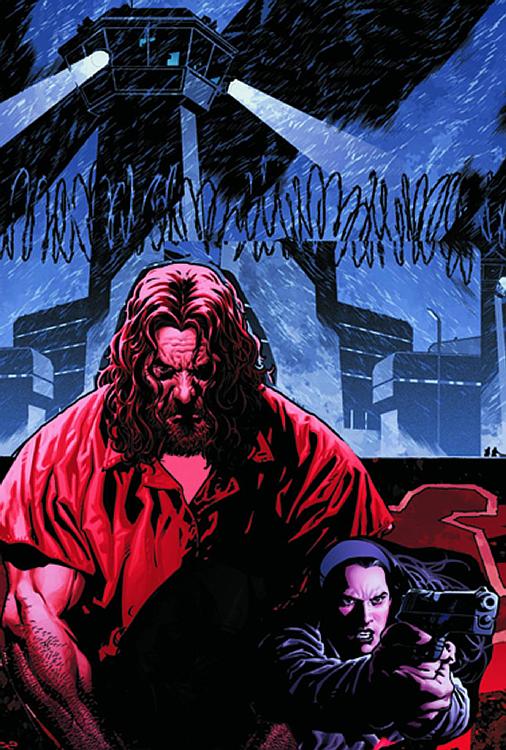 If you’ve ever wished Marvel or DC would add some variety to their publishing line, you should be paying attention to “DCU Presents Savage”. The main story has more in common with Silence of the Lambs than it does with the superhero-populated world in which it’s set. Too bad the rest of the anthology feels like filler.

Written by James Robinson, Dan Didio, and others
Illustrated by Bernard Chang, Keith Giffen, and others

Kass Sage, daughter of Vandal Savage, is an FBI profiler – and when she’s on the trail of a serial killer, she must seek her father’s help to put an end to the killings. Also, don’t miss tales of Kid Flash, Hawk and Dove, OMAC, and more in this title collecting DCU Presents #0 and 9-12!
$14.99 / 144 pages

It’s easy to imagine the pitch James Robinson used to sell this book. “It’s Silence of the Lambs, but Hannible is immortal and Clarice is his daughter.” Give the bad guy a supernatural appearance and that’s pretty much what you’ll read in “Savage”. Kass is after a killer who’s copying her father’s method of murder, and she has to let him come along on the search if she wants his help. There are a few twists to keep the pace lively, but nothing too surprising. The final reveal won’t have you exclaiming “OH REALLY?!” so much as cocking your head to the side and saying “…really?” That’s ok though, because the real entertainment here doesn’t come from the bad guy and his motives – he really only exists as a reason to get Kass and Vandal together. Their interaction is charming in a dysfunctional way, and Robinson raises the intrigue a notch by keeping the truth about Savage’s immortality ambiguous.

The two chapter breaks use flashbacks to segue between scenes, one for Kass and one for the villain. The first one works smoothly, the second one not so much. The scene is meant to parallel Kass’s, but it’s rushed and requires a good deal of awkward exposition to explain some motivation. For what it’s worth, Robinson seems to realize this, and Vandal even points out the villain’s idiocy in the story. In all, the three parts feel like a whole when they’re put together, and the chase holds up under multiple readings. When you reach the end, you’ll be ready for the further adventures of Kass and Vandal.

As far as the art goes, well…Chang has potential. His characters are all emotive and well proportioned. The backgrounds are all adequately detailed, and the action scenes are verly lively. However, he seems to be experimenting with different panel layouts, some of them are just plain hard to look at. Several pages have long, narrow panels which are hard to take in individually. When these are followed by pages of horizontal panels of varying height, it compounds the problem. Mix in some border-free panels and some wedge-shaped panels, and it just doesn’t work very well. Chang also did coloring, and when one person does double duty like that, you can expect better than average results. Here, Change makes some odd choices regarding lighting and shading which takes his great line work and turns it into something which looks like Andy from Toy Story. If he had stuck to a more traditional panel layout and with more natural coloring, this would have been very fine work.

After this fun three part story, the trade also includes some shorter stories and does a complete nosedive in quality. The original review of the zero issue was spot on, and the only thing to add to that analysis is to ask why these stories were even included here. They should’ve been split off and attached to the final trades of their respective series. As it stands, it’s very unlikely anybody, even the most sincere DC fanboy, wanted all of these stories under one cover. Here, all they do is drag down the quality of the collection as unwanted filler.

The volume includes some sketch pages, and is sold at the same price as the original five issues. Considering you won’t be interested in at least 8 pages of story here, that’s a rip. Flip through the book, and if Chang’s art appeals to you, go buy issues 9 to 11 out of the back issue bin. Otherwise, leave this collection of bad decisions on the shelf.