Anyone who didn’t read this title when it was new is probably at least thinking of trying it now, considering the recently announced upcoming movie. Is the first trade a good place to start? 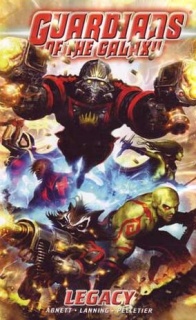 Led by Star-Lord, the newly reconstituted Guardians of the Galaxy include a who’s who of the mightiest – and most bizzare – protectors the stars have ever seen! Rocket Raccoon, Adam Warlock, Drax the Destroyer, Quasar, and Cosmo the telepathic space dog take on the menaces against whom a war-weary universe cannot stand – and have a little fun while doing it! Bu there’s nothing funny about the Skrull threat – a secret invasion that pits teammate against teammate in a game of shadows and secrets that could tear the new team apart!

The writing duo of Abnett and Lanning are well known for their snappy dialogue, and their chosen cast gives them a great chance to show off thier skills. Everyone gets in at least one good line, and manage to do it while still sounding like themselves. Characterization is consistant throughout the book, although Quasar and Warlock’s abilities (and limits) seem to be whatever the plot requires of them.

Speaking of the plot, this trade has three main storylines: A one-issue introduction, a two-issue adventure explaining the team’s and the series’ mission statement, and a three-issue ‘Secret Invasion’ tie-in. All six issues are held together by the team lineup, which changes in the final issue. The introduction issue does a reasonably good job considering the cast size and long history of each character. That said, the book does seem to expect the reader to at least familiar with the “Annihilation” and “Annihilation: Conquest” events which spawned this series. A prose recap page would’ve gone a long way, but the single issue didn’t get one either, so that shortcoming isn’t exclusive to the trade. The next two issues reveal the team’s mission in a rather vague way. The universe is falling apart in some places, so Adam Warlock needs go to those places, to wave his hands around, and fix it. The rest of the team goes along to watch his back, since these ruptures only occur in areas with hostile locals, usually the Universal Church of Truth. The ‘Secret Invasion’ tie-in issues serve as a natural background to examine everyone’s motives with exposition which didn’t seem like exposition.

Narratively, this trade feels like it should’ve been two shorter ones. The first three issues have a framing device of confessional-like boxes where the characters talk about the current action in past-tense. DnA must’ve realized this was distracting, so it was abandoned without comment starting in the fourth issue. The only other narration came from Drax for about five pages in the fifth chapter when he explained his fighting strategy to the reader. The first issue contained some short flashbacks to the team’s construction, but the flow naturally and end early enough in the volume not to be distracting. The chapter breaks are mostly fluid. The action stutters a bit as a newly arrived villain commands the team to stand down twice between issues two and three, and when the Skrull situation is explained to Star-Lord twice between issues four and five.

Artistically, the book as consistant as you’d expect it to be when it’s penciled, inked, and colored by the same team the whole way through. Characters stay in the same place between chapter breaks, which is the only problem typically seen there isn’t an artist shake-up mid-volume. There is one odd moment in the third issue when, during a fight, Star-Lord takes off his helmet, talks to Warlock for three panels, and then puts it back on to resume fighting. It’s possible that was in the script, but I think it’s more likely Pelletier wanted to show some emotion instead of a metal mask.

The bonus features are rather lackluster, even to the point I hesitate to use the word “bonus.” The volume includes the pencils for a two-page splash, some unused cover ideas which look a lot like the used covers with characters cut and pasted in different locations with different coloring, and one page of concept art for the new Starhawk. This is pretty disappointing in general, but especially so for a first volume.

The value compared to the single issues is minimal, coming in at $1 less than the sum of the monthly cover prices. The bottom line on if you should buy this trade or the floppies depends entirely on if you can find the backissues for more or less than the original retail.

I was a huge fan of this series, and I’ll be in line at midnight for the movie, but I’m not sure this is the best place to start for readers who want to jump in. I’d suggest going back to “Annihilation: Conquest,” or even “Annnihilation” or “Thanos: Samaritan” before that.

Final Verdict: 7 – Not worth buying unless you know what’s going on