Tradewaiter changes its game this week and takes a look at an original graphic novel instead of collected issues. Surely this would only happen if the book were really, really good, or really, really bad, right? WHICH WILL IT BE? 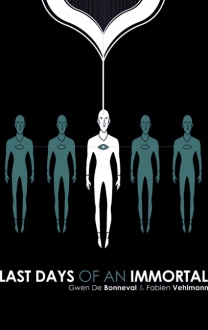 Written by Fabian Vehlmann
Illustrated by Gwen De Bonneval
When you live forever, what will you live for?

In the distant future, Elijah is a member of the “Philosophical Police,” who must solve conflicts that arise out of ignorance of the Other. TWo species are fighting a war with roots in a crime committed centuries ago, and Elijah must solve the crime and bring peace between their species, while also confronting his own immortality in a world where science provides accesss to eternal life. In a world whre death no longer exists, why do so many want to give up on life?

When Archaia (or any publisher, really) translates a European comic into English, it’s worth a look. Aside from a few outliers, only the high quality stuff qualifies for such treatment. “Last Days of an Immortal” is no different.

The solicitation calls the book cerebral sci-fi, and it earns the adjective. Some of the ideas Vehlmann introduces are barely tangential to the plot, but interesting enough to have carried a book on their own. Looking through all the high concepts he has here, it’s hard to even pick out which one came first. It’s like he had eight ideas for cool stories, then realized they’d be even cooler if he smashed them all together.

The book opens with a dead body, the scene being eerily narrated by the deceased. In this world, people can create temporary copies, or “echoes” of themselves. These echoes go and do whatever the original doesn’t have time to do. When they merge later, the original person will have memories of both experiences, but at a cost: they irreversably lose some of their older memories. Everyone has at least one echo, because an echo can be turned into a primary body in the event of an accident. Hence, everyone with an echo is immortal.

From there, Elijah is called to solve the murder. The ‘who’ part isn’t the trick. The murderer admits he did it, and feels very bad about it. The part Elijah needs to solve is the ‘how.’ See, the murderer isn’t human, and the death was accidental. Elijah’s job is to learn what communication breakdown led to the death, and to explain it to both parties so it will not happen again. The nuance Velhmann puts into the various alien cultures Elijah encounters is impressive, especially considering the limited amount of page time they recieve.

While trying to solve the case, we get a glimpse into Elijah’s personal life as well. He has a lover, though their relationship is rocky. They attend parties where we learn Elijah is a particularly famous Philosophical policeman. He waits at a transportation station where a stranger mocks his profession. He tries to visit an old friend, only to learn the friend let his life expire and purposely did not say goodbye to Elijah. This last part is the emotional heart of the story.

Elijah is upset at the loss of his friend, and his grief affects his decisions for the remainder of the book. In order to do his job well, echoes are essential. However, he will lose all early memories of his friend if he merges with too many more. He will remember he was hurt, but be unable to understand why. His work to prevent a planetary war between two species, while engaging, takes a backseat to the emotional journey as he struggles between his job, immortality, and the personal bonds he stands to lose.

One of the biggest pitfalls a translated work can fall into is stunted dialogue. Clever word play or colloquialisms can be completely lost in the move between languages, but there appears to be no loss of meaning here. How much this is due to Vehlmann’s original wording and how much is due to translator Edward Gauvin is hard to say. Either way, “Last Days of an Immortal” is a smooth read from start to finish, and any blandness in speech is easily attributed to Elijah’s awkward personality. 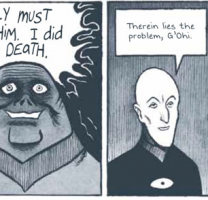 Speaking of blandness, Bonneval’s art is striking for its lack of detail. Backgrounds, when present, are usually just lines marking where the floor ends and a wall begins. His character designs are distinct, but almost comic strip-like in their simplicity. This works in the story’s favor by making the aliens seem as unremarkable to the reader as they are to the characters. It also allows greater flexibility when showing motion. A couple scenes feature dancing, and the movements seem much more fluid than if they were drawn with more realism.

This book may be hard to track down in-store, and you be nervous about plunking down twenty five bucks for a book you’re unsure about. To be frank though, browsing it first wouldn’t help because the simple art betrays the depth of the story. If you like character-driven plots and/or high-concept sci-fi, this book is for you.