Sometimes you really like a creator and want to check out his various work, but don’t always have access to it. Sometimes you hear so much about one series, but no one can give you a firm grasp of which trade or hardcover to pick up in order to enjoy the series in the proper order. Sometimes you just don’t know what to do, so you stop trying and go read something else, defeated and upset.

And sometimes, because the gods of comics love you, they deliver unto you an omnibus worth of comics in the “proper reading order” so you don’t have to think about it anymore and just enjoy some good comics.

Ladies and gentlemen, I present to you: the first Grendel Omnibus. 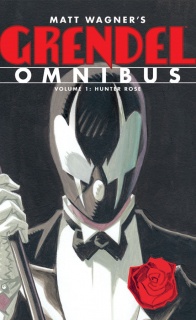 Matt Wagner’s masterpiece celebrates its thirtieth anniversary with the first-ever comprehensive collection of the complete Grendelsaga! The first of four volumes presenting the entire series and following the chronology of the stories, this edition introduces millionaire Hunter Rose and his alter ego, the criminal mastermind Grendel!

* The complete series, collected for the first time!

“Grendel is a brave and possibly even reckless experiment that has succeeded admirably.” –Alan Moore (Watchmen)

Matt Wagner is one of the most prolific creators in comics who does not get nearly the proper amount of credit that he is due. Responsible for fantastic runs with the DC Trinity as well as a terrific “Madame Xanadu” series for Vertigo (that, seriously, was like the Mad Men of DC in it’s first twelve issues), one of Wagner’s seminal works was the creator-owned series “Grendel,” which began life as the dark and somewhat tragic tale of Hunter Rose. With the first story released in 1983, the character has seen a 40 issue series, graphic novels and various anthology stories and collected editions. However, finding all of “Grendel” is a bit difficult, due to several books being long out of print and lost to shelves across the country.

That’s all changing, though. Now, courtesy of Dark Horse, you can get the first of four 600-page omnibus at good comic shops everywhere, containing the opening storyline of the series. We won’t spend too long getting into what “Grendel” is about because, truth be told, you should already know. However, if you’ve never heard of the book, here’s the elevator pitch: Hunter Rose, successful author and playboy of sorts, adopts a mask and fights crime, eventually taking over all of the crime in New York and becoming a crime lord of sorts. This isn’t a story about a superhero; far from it. Hunter Rose, the man behind the mask of Grendel, is a villain. And yet, his story is so engaging and unique that you can’t help but be riveted as he falls down a dark spiral of moral ambiguity. It’s twisted with hints of noir, and it is a fantastic comic.

It goes without saying, but Wagner is a fantastic storyteller. With a keen eye for time-based narratives that circle moments of history without ever interacting and yet still remaining evocative of a bygone error, “Grendel” lurks in the shadows of the twisted visions of New York seen in films like Naked City. Not only that, but Wagner uses “Grendel” as an opportunity to subvert conventional storytelling, with the opening book ‘Devil by the Deed’ featuring beautiful artwork and a non-traditional narrative structure in a sequential art medium as we essentially read a non-fiction novel over JH Williams III-esque splash pages (and, please keep in mind that ‘Devil by the Deed’ was published as a back-up in “Mage” in the late 80’s, long before J3 was strutting his stuff in books like “Batwoman” or “Promethea”). Wagner simply knocks it out of the park with this one, delivering such an unassuming tale that takes a sharp turn for the worst and delivers the origin of a character who only grows in an unimaginable fashion over the next few hundred pages.

Plus, add to that the two anthology books contained within this volume and one look at the artist list above, featuring 44 artists of renowned critical acclaim, should literally be enough to sell anyone on this book alone. For reals.

However, there is one detrimental quality to the book. The book is published at a 6″ x 9″ size, which is smaller than the average comic (think about those Bone books Scholastic does, if you need a reference). Because of this, some of the art is compacted down so you can’t see all of the true intricacies of Wagner’s fantastic artwork. Even worse, in the opening story ‘Devil by the Deed,’ the lettering, which was already pretty small, is now even smaller. It’s not tiny enough to hurt your eyes, but I can’t imagine having reading glasses right now being a bad thing.

Small lettering snafus aside, the book is a great collection. For six hundred pages of great comic, it’s a deal that wouldn’t be recommended to pass up on. Considering three of the volumes it collects are out of print (‘Devil by the Deed’, ‘Black, White and Red’ and ‘Red, White and Black’) and the other (‘Behold the Devil’) is $20 at list price, $24.99 for the whole package is quite a steal — just the way Hunter Rose probably would have wanted it.