This sci-fi tale explores a society where people live thier lives through remote controlled stand-ins. Even if you’ve already seen the Bruce Willis movie it inspired, this is still a book you should read.

The year is 2054, and life is reduced to a data feed. The fusing of virtual reality and cybernetics has ushered in the era of the personal surrogate, android substitutes that let users interact with with world without ever leaving their homes. It’s a perfect world, and it’s up to Detectives Harvey Greer and Pete Ford of the Metro Police Department to keep it that way. But to do so they’ll need to stop a techno-terrorist bent on returning society to a time when people lived thier lives instead of merely experiencing them.
$19.95 / 208 pages

Originally serialized as five issues in 2006, this Topshelf Productions book is a very solid read. Venditti’s worldbuilding is terrific and subtle. Weldele handles all the art chores, and provides a very distinct look for the book, although it may not be for everyone. The 2009 movie borrowed elements from this book, but the plot and characters are vastly different. If you liked the movie, you’ll like the book.

If you didn’t like the movie, there’s still a good chance you’ll like the book. Venditti’s narrative structure works very well for both single issue and in trade. Each chapter covers the events of one day from morning to night, providing very natural and fluid breaks. Helping to further disguise the cuts, background material from each issue is inserted between the chapters. Think the “Under the Hood” excerpts from “Watchmen” and you’ll have the right idea. Info dumps for new readers are cleverly disguised as the police chief demanding updates from the main character, and the dialogue is amazingly natural. Individually, each chapter feels like a full story; together, they melt into a single epic. 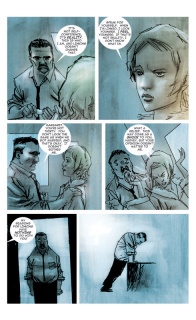 Weldele’s art provides a unique feel to the book, but that isn’t always a good thing. He was responsible for the pencils, inks, colors, and lettering, so I feel safe assuming every panel turned out the way he wanted. The bonus materials in the back of the book provide a look at the evolution of a couple pages from script to finished lettering, which helped me pinpoint what I didn’t like. His pencils and inks were terrific. It was his colors which distracted me during the story. Weldele uses a computer program to color, which is fine, but he uses scanned paint textures and sharp contrasts instead of smooth, more natural gradients. The result is mono and dichromatic art which looks very busy.

The bonus features for this book are astounding. Remember when the solicitation said it was 208 pages? The story ends on page 158. “The Surrogates” is 25% bonus content. The first few pages are the issue covers, which are standard fare. Next comes concept art, which is enhanced by the inclusion of Venditti’s original text description. It’s always fun to see what contributions came from the writer, and what features the artist decided to add on his own. Eight pages detail the path from script to finished product with explanations of what happens inbetween from Venditti. I was surprised by the amount of detail Venditti included in his script. There were lots of minor things, like requesting a bandage be loose from jostling which is neither relevant to the story or very noticable during a reading. I got the impression he could write a mean prose novel if he tried.

The next neat features are something which are probably unique to “Surrogates.” For the publication of the single issues, the team hired a graphic design firm to help with the end-of-chapter suppliments and create fake ads to run on the back cover. These ads are reprinted with commentary from Venditti, which helpfully pointed out to me details in the suppliments, like the look of a computer screen or photo-copied paper, which I had overlooked because they had been done so well. The trade also includes what is probably the only example of a deleted scene in comics, complete with script, pencils, and comentary on why they changed it. The last bonus feature is a series of pin-ups of the book’s main characters by various artists, including one from Muliversity favorite Matt Kindt.

The trade costs the same as the five individual issues, which doesn’t seem like a great value at first. Factor in the bonus content, however, and this book becomes a steal. Despite the occasionally busy art, the story is amazing. There’s also an OGN prequel availible, “Surrogates: Flesh and Blood,” which is just as good, and it can be read before or after the original.