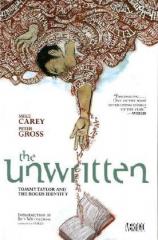 It’s always easy to tell when a comic is trying to be more than average entertainment. The plots are a little more intricate and purposeful. The dialogue feels heavier, weighted with double meanings. Every tiny detail feels packed with gunpowder, prepared to explode when the time is right. “The Unwritten” is just such a book, and its success at being literary is a matter of degree.

Tommy Taylor’s the main character in a series of fantasy novels that have become a cultural phenomenon. Fans gather on websites and at conventions to celebrate his magical stories and hopes that his missing creator, Wilson Taylor, will someday resurface to write one last adventure.

But there’s one dangling plot thread: the real Tom Taylor, the son Wilson abandoned. The inspiration for the magical boy wizard, Tom is now worshipped worldwide as a literary legend made flesh.

As Tom’s life begins to take on eerie and deadly parallels with Tommy’s, he’s drawn into a strange literary underworld where the power of storytelling is as strong as any spell.

The first collection in this series contains so much story, no summary will do it adequate justice. It has multiple narratives running at the same time, jumping between the present, the past, and the fictional world-within-a-world of the Tommy Taylor novels. The plot moves very fast and lays out about 100 threads for future arcs, but at the same time it flows smoothly and never feels rushed. It also makes direct and indirect references to great works of literature and their creators, such as “Frankenstein”, “Moby Dick”, and Mark Twain.

The chapter breaks are obvious, but not distracting. The way the plot develops, the single issues read less like collection-appropriate arcs and more like chapters in a longer epic. That makes sense, given the subject matter, and also means there isn’t any duplicated content at the start of each issue. On the other, it means the break at the end of this collection feels somewhat arbitrary.

All of this stands as a testament to Carey’s skills as a writer. He starts with architypical characters you understand immediately, but adds enough nuance and mystery to give them depth and hold your interest. They speak plainly with individual voices instead of all talking like the writer (or like the writer believes people talk). Carey utilizes occasional pages of full prose disguised as webpages to deliver exposition. Instead of seeming like a cheat, it actually helps to immerse you even further into the world of “The Unwritten”.

Gross helps bring the rich characters to life in panels swimming with fluid motion. There isn’t much call for action, but every scene seems to come alive. Much of this stems from Gross’ minimalist style – in some cases faces are made from only five lines – which makes it very easy for characters to be expressive in action and emotion. He also flexes his style to match the current narrative; pages in the present look very different from the pages illuminating one of the Tommy Taylor novels, but are similar enough to look good in the same book. According to the bonus materials, these pages were originally going to be prose. Luckily for readers everywhere, Gross took a shot at illustrating them anyway.

The trade comes with more than just the usual bonus features. In addition to the covers, which are interspersed as chapter breaks instead of a gallery, there are also sketches of unused covers and the original prose Gross drew from to create the illuminated Tommy Taylor pages. The collection has the same cover price as the five single issues, which means the bonus features come at no extra cost.

With all this praise, you might think “The Unwritten” would get an qualified ‘buy’ rating. Not so! While the main premise is completely different from “Sandman”, the two are told in a similar manner. Where “Sandman” drew on fairly tales and mythologies most people know, “Unwritten” pulls from classic literature you’ve probably never read. While it’s usually explained enough for anyone to get the basic idea, you will be very aware you’re missing some important subtexts. Because of that, this one gets a very high ‘browse’ with the caveat of you most likely wanting to buy it.

Final Verdict: 6.999 – Browse with expectations of loving it