Welcome back to We Want Comics, a column exploring intellectual properties, whether they’re movies, TV shows, novels or video games, that we want adapted into comic books. Chances are, if you grew up in the ‘90s and played RPGs on a video game console, you’ve heard of Chrono Trigger. It’s an adventurous and emotional tale of time-hopping friends that merges sci-fi and fantasy seamlessly. Even though it’s turning 25 next March, it remains a fan favorite of gamers everywhere thanks to an unforgettable story, a consistently gripping plot, unique and nuanced characters you fall in love with, and unforgettable music from Yasunori Mitsuda and Nobuo Uematsu. Don’t believe me? Wikipedia’s got the numbers:

It also makes mention that as of today, the game has been ported to PlayStation discs, mobile phones and devices, the Nintendo Virtual Console, the PlayStation Network, and even Microsoft Windows and Apple TV.

All right, you get it. It was popular, and it still is. Here’s why it should be a comic. 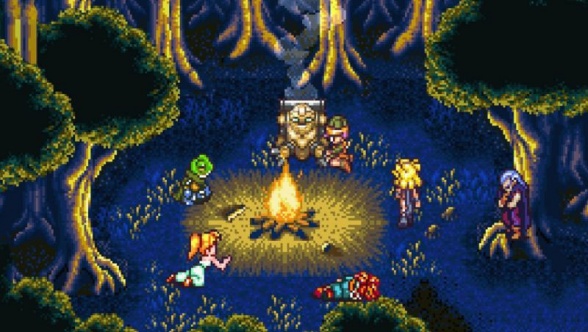 Chrono Trigger started with a simple premise: Save the princess. And while it’s a quest that takes some time to complete, it’s only a fraction of the game’s story. The truly insidious thing about the game is how effortlessly the game shifts beneath you; you’ve only just saved the princess, and suddenly, you’re in the future, seeing first-hand how the planet died. It’s a hell of a hook, and there are many smaller ones throughout that keep the game’s momentum going.

The thing is, there’s plenty of story to tell. While estimates of game length are all over the place, you could break down each mission or quest into story arcs: rescuing Marle, escaping the future, going back to the past to fix the Masamune in the present, Magus’s castle, and so on. That alone could take years.

Beyond that, you have the Chrono Cross spin-off game, which takes place in a universe parallel to Chrono Trigger’s, and Radical Dreamers, a text-based, Japanese video game seen by few Americans that acts as a kind of bridge between the two games. But let’s not get ahead of ourselves – while these show that there’s plenty of conceptual fodder for a comic book series that could last for a decade or more, there’s more than enough in the original game and the events tying to it in these spin-offs to make a strong series.

Now, there was Chrono Trigger manga by Kaneko Osamu, if you include what was printed in the player’s guide for the Japanese version of the game. It starts with events leading up to the very beginning of the game, and goes from there. And, if you want to count it, there was also a short video that followed some monsters from the game and has lots of cameos from other characters. It got…less than stellar reviews from fans of the franchise. 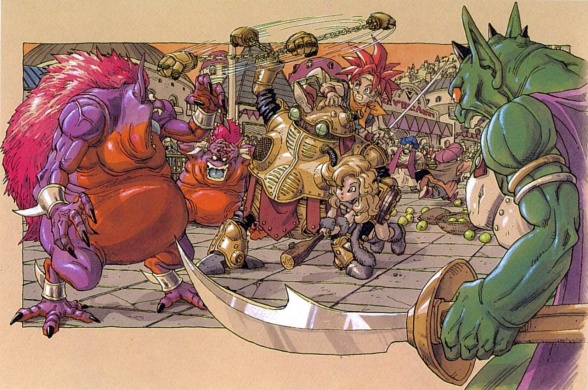 While the manga and the OVA were too short-lived to lead to a continuous series, they do lead to a bigger question looming over all of this. Who would write the Westernized comic? After all, writing Chrono Trigger would be a serious undertaking. It’s a long-established IP with a team of beloved, teenaged characters. Some of those characters walk and talk like humans, but look different on the outside. Some have parents with disabilities. Some are robots or morally gray magic users. Strong women, time travel and complicated feelings.

He’s a longtime fan of the game. In fact, on Twitter, he’s claimed that no other game stimulated his young mind more, and that it probably informed his love of the X-Man, Cable. Speaking of X-Men, they’re an established and beloved team of teenagers and adults and even robotic entities, all nuanced with varied backgrounds and personalities. Their stories have time travel and dimensional travel, and their politics are socially progressive (as were Chrono Trigger’s). And Thompson has experience writing for them. Plus, he had a disabled parent growing up, so he may be a better fit writing for Lucca (and later, Crono) than others.

Thompson’s talent writing both for X-Men and for his numerous creator-owned series also shows he’s a font of creativity. While much of the plot is there, adapting Chrono Trigger for a comic medium would be more than just connecting the dots. The dialogue would have to be updated for the page, for example. But more than that, Thompson would have to fill in the bulk of what happens in between the big events. This is important. While so much of the video game’s duration is spent traveling between events, fighting monsters, and leveling up, a lot of that won’t exist in the comic – at least, not in the same way. Battles and traveling will probably exist, but will also be used to develop plot, characters, and their relationships, and that’s content that needs to be created.

There’s also room for an entirely new creative story to be told, an alternate avenue the comic could take. Why rehash or mess with established canon and all the fanboy fallout that could potentially precipitate, when you could do something new and make it your own? The “Chronoverse” (did I just coin that term?) is territory that’s fertile with time travel, dimension-hopping, and a large cast of characters. There are more stories that can be told in the Chrono Trigger universe, and Zac Thompson is the one to do it.

Plus, if it’s a success, maybe they’ll turn it into a video game. 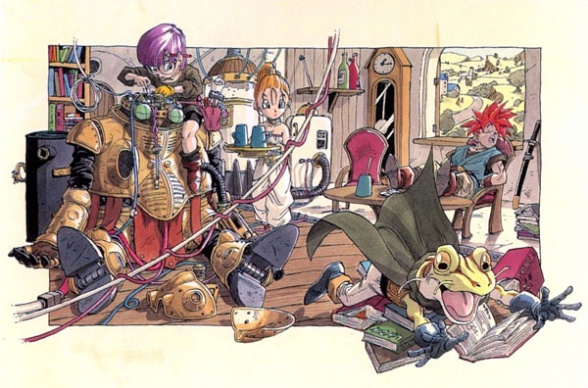 Akira Toriyama is the original creator of the “Dragon Ball” series, but many don’t know that he also created a good deal of concept art and character designs for Square and Enix years ago. Even for fans who didn’t know he created it, Toriyama’s concept art for Chrono Trigger is legendary, a fan favorite to this day. His unique vision for the characters and their world is singular and, as such, it would be a shame to bring on any artist other than Toriyama for the role of illustrator.

However. Let’s assume, for argument’s sake, that the 64-year-old manga writer and artist wouldn’t want to launch a brand new, multi-year series. You could go in one of two directions.

The first seems like the next logical step: you hire Toyotarō (or “Toyotarou”), Akira Toriyama’s chosen successor and the official artist of “Dragon Ball Super.” He’s worked closely with Toriyama for years, and his style is very similar to Toriyama’s. It seems only natural that Toyotarō be chosen to bring the spirit of the “Chronoverse” to life in Toriyama’s place.

The second direction you could take when choosing an illustrator is to go a more Western route. If I had my druthers, though, I’d bring on someone with manga influences in their style. Allow me to present three options:

1. Karl Kerschl – As the illustrator (and co-writer) on “Isola,” Kerschl brings a Miyazaki-meets-old-school-Disney-fantasy styling to its world. Combined with MSASSYK’s ensorcelling palette, “Isola’s” art feels instilled with magic. It’s unlike any other comic on the shelf, and it brings a sense of adventure to every single page. And, while magic and adventure are huge, there’s this strange undercurrent of sadness and loneliness throughout “Isola” that’s also present in Chrono Trigger. Karl Kerschl’s also been illustrating comics for over two decades, so you know the series would be in good hands.

Personally, I’d also bring “Isola’s” letterer, Aditya Bidikar on – partially to keep a team that we know already works well together, and partially because he’s one of the most talented letterers in the business.

2. Wook Jin Clark – Wook Jin Clark brings such a unique aesthetic to comics like “Flavor,” which has a very “manga” feel. Creatures have anthropomorphized, comical expressions and the fantasy world the creative team built in that comic feels so rich and textured, in no small part thanks to the masterful color work of Tamra Bonvillain (who I personally like to cast as colorist in any fantasy title after seeing her work in “Flavor”). Bonvillain’s warm palette in “Flavor” would suit Chrono Trigger nicely.

But back to the illustration style! While some elements of Wook Jin Clark’s art are humorous, the art in “Flavor” is finely balanced between the lighthearted and the serious. It’s a good match for Chrono Trigger’s tone, which can feel so heavy at times, it needs those moments of levity for a little relief. Plus, his unique style would be a fine compromise between the original art from Toriyama and an altogether different style.

Now that I’ve mentioned letterers, I feel like I can’t leave out Ariana Maher, who also worked on “Flavor” and brings a wealth of knowledge and talent to the table. I think she would have fun with the “Chronoverse’s” characters and changing tone.

3. Sana Takeda – What if you took all the fear and melancholy and loneliness of Chrono Trigger and leaned into it? Sana Takeda’s work on “Monstress” is peerless. Her artful attention to detail is incredible, and she imbues every panel with shadows and sorcery. The tone of “Monstress” is dark. Bleak, both in the writing and in the art. Often, in Chrono Trigger, the game’s soundtrack would play as a gloomy counterpoint to its vibrant colors and sprite characters. Without a soundtrack to rely on for a comic book, Takeda’s art and colors would be a gorgeous, stunning way to bring that tone to the page.

4. Mark Buckingham – As penciller of “Fables” for over 110 issues (as well as other notable works), Mark Buckingham could bring a more photorealistic, “Classic Vertigo” vibe to a Chrono Trigger comic. He has more than enough experience drawing fantasy characters and worlds, and his pages explore aesthetics both mundane and magical. While he may not want to jump on another long-lasting fantasy series, it sure would be interesting to see how he’d bring the characters and worlds to life in a way that looks more realistic and westernized.

At almost 25 years old, Chrono Trigger is a universe that still feels ripe for exploration. Even though it’s been nearly two decades since the last installment in the series, Chrono Cross, fans around the world clamor for more. Be it the time-hopping, the fight against world-threatening destruction, the unforgettable characters and world and soundtrack, or something else that’s harder to put your finger on, Chrono Trigger is a beloved and timeless classic, and its universe deserves to be revisted.