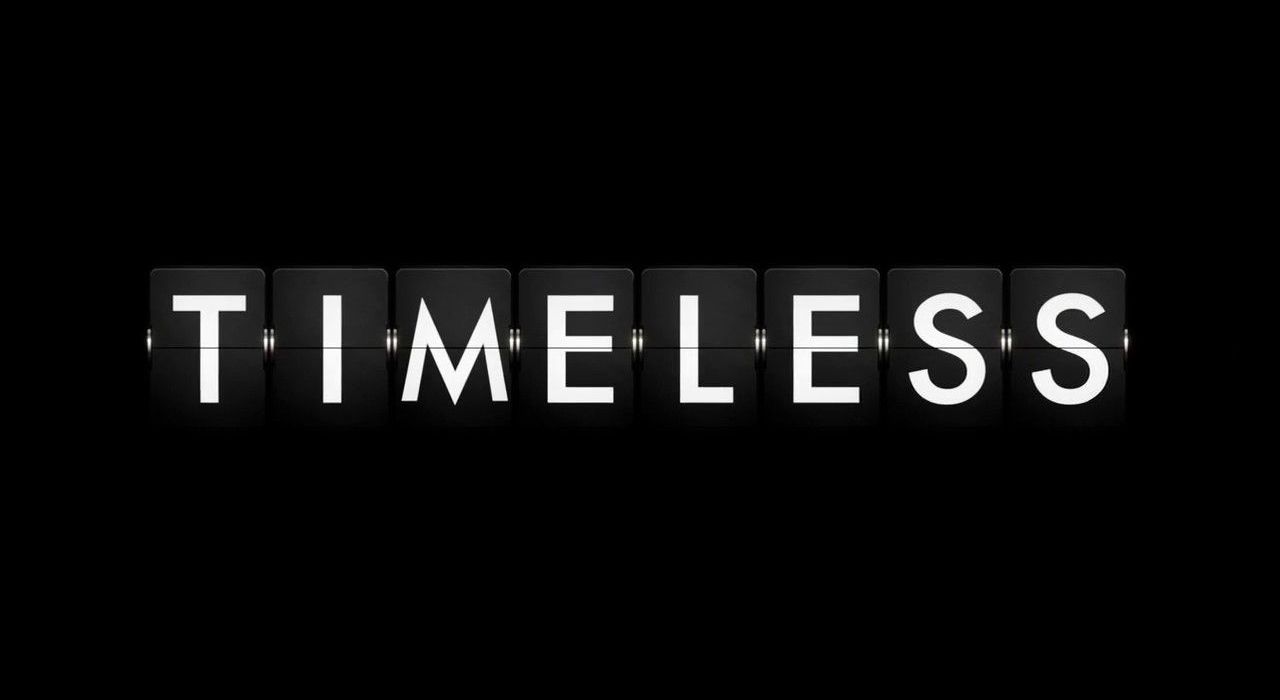 Welcome back to We Want Comics, a column exploring intellectual properties, whether they’re movies, TV shows, novels or video games, that we want adapted into comic books.

My boyfriend and I have been using our quarantine time catching up on shows that we either missed or never finished watching when they initially aired.  One of those shows is NBC’s Timeless, which aired on the network for two seasons (and a movie) from 2016-2018.  History teacher Lucy Preston joins up with U.S. Army Delta Force operative Wyatt Logan and programmer Rufus Carlin to chase after NSA operative Garcia Flynn as he jumps through history in an experimental time machine. But what Flynn is chasing has implications for not just the team members, but history itself.

The time travel/alternative history drama, plus the will-they-or-won’t-they sparks between the very single Lucy and the very widowed Wyatt (and a small love triangle with Flynn, played by ER star Goran Višnjić) kept fans hooked and lobbying for a second season after the show was cancelled in May 2017.  (In fact, it was renewed for a second season three days after its cancellation!) And while Lucy and Wyatt were White, the show featured a truly diverse cast.  Homeland Security agent Denise Christopher, who worked with the team on behalf of the U.S. government, is a South Asian lesbian. Connor Mason, whose company created the experimental time machines (the stolen “Mothership” and the “Lifeboat” that sees the majority of the team’s travels) is a Black British man.  Programmer Jiya Marri, who later had a relationship with Rufus, is a Lebanese woman.  And Rufus is an American Black man, which led to some interesting and uncomfortable situations for him as he traveled through America’s very racist past.  Many of the time travel stories also focused on women and people of color, from blues musician Robert Johnson to Benjamin Franklin’s mother Abiah to Marie Curie to Harriet Tubman.

What would a Timeless comic look like?  The possibilities are as endless as time itself.

Be forewarned there will be spoilers for the show throughout.

A Dive Into History

Timeless made sure to hit the greatest hits of American history from the Salem witch trials to the Civil War to the Reagan assassination attempt.  But it also made time to explore some lesser known events to the wider TV audience, places figures, such as Chinatown in 19th Century San Francisco, the Hungnam evacuation during the Korean War, and an African-American NASCAR pioneer Wendell Scott.  Lucy’s dialogue provided enough context for viewers to understand the importance of the mission but with just enough details out for the story  – – and to send curious viewers to Wikipedia to read more.  A comic or graphic novel series would be a great way to expand on some of these events that the show itself didn’t have time to do so, showing what actually happened alongside how the team ever-so-slightly changed history.  As the show ended with Lucy and Wyatt happily married with two daughters, the connecting thread could be the couple recounting their early days together in the Lifeboat.   Another possibility is an illustrated version of Lucy’s journal, a key for Lucy to understanding her role in the larger mission, and sometimes a key element to moving forward in a mission.

On the topic of Lucy’s journal, there were events in the journal that we did not see on screen, such as something involving Lucy, Flynn, and the Titanic.  Comics would be a fun way to explore those “missing” missions in more detail.

The Lifeboat team could not travel without the help of their team back in the lab: Agent Christopher, Connor, and Jiya (though they each got their own opportunities in the Lifeboat). And they all had rich backstories.  We saw a portion of Agent Christopher’s backstory in the second season episode “The Day Reagan Was Shot” where the team travels back to the Reagan assassination thinking their target to protect was the President or his assassin David Hinckley . . . but turns out to be Agent Christopher herself.  Lucy, Jiya, and Rufus (though mostly the women) have to convince a young Christopher (here a D.C. cop) to not be forced into an arranged marriage by her mother that would result in her departure from the police force, and keep her in the closet in perpetuity.  If they don’t, the team ceases to exist.  It was one of the most heartwarming, emotionally resonant, and fun stories of the season because we got to know our steel-faced government employee just a little bit better.

Prequel comics are certainly fun ways to extend the universe; it worked for Supernatural (which has something in common with this show: Eric Kripke) in 2011.  So why not a series showing Agent Christopher’s early days in government work, or the birth of Mason Industries and their discovery of time travel?

The enemy of Timeless was Rittenhouse, a shady organization that seeks to change history for its own gain.  Rittenhouse’s tentacles stretched way back into American history (it started formally at the American Revolution but its roots go back to the Salem Witch Trials) and ended up connected to Lucy and Wyatt by the end of the series:  Lucy’s parents were Rittenhouse operatives, and Wyatt’s wife (brought back from the dead in Season 2) ended up working for them.  How did Rittenhouse come to be?  How did they recruit their operatives? What is their goal besides self-interest?  We knew they were dangerous because the show told us so, but why?  There were hints of answers to these questions throughout the seasons, such as Jessica’s involvement after Rittenhouse paid for an experimental treatment for her younger brother’s cancer that ultimately saved his life. But we really didn’t know much about Rittenhouse, even at the very end.

There’s so many mysteries of Rittenhouse, and a comic would cover that all beautifully.

Outside of those times where a member of the lab traveled with the team, such as Connor Mason’s trip back to San Antonio in 1936 to meet up with blues musician Robert Johnson, Timeless told the time travel components of its stories from a neutral or ensemble point of view.  This was one of the show’s missed opportunities as they had a Black man as part of the team, experiencing many aspects of American history that were, to put it mildly, unkind to Black people.  More than one episode found itself in the American South, either during the Civil War, Reconstruction, or the Jim Crow era.  And indeed, our modern characters showed their more enlightened sides and gently educated on topics of oppression and racism.  But remember, two-thirds of our team is White.  Why not retell those stories, but strictly from Rufus’s point of view?

Another idea involving Rufus is his alternative history.  At the end of the second season he actually died (something Jiya predicted in visions to great heartbreak), but when Flynn kills Jessica in 2012 (ensuring she does not live to find Rittenhouse), Rufus is back.  He has no memories of being dead, but an entire alternative timeline.   What was that?

Fish out of Water

Not all the missions involved travel to the past.  Sometimes the past came to the present.  In “The Kennedy Curse,” a slightly botched mission brought a teenage John F. Kennedy from 1934 to present day. Watching him navigate 21st century America was both amusing (JFK versus an iPhone) and heartbreaking (when he discovers that both he and his brother die at the hands of assassins).  It’s also one of the very overt times the team try to actually change history, with Rufus begging JFK not to go to Dallas in 1963.  (In the alternate timeline, he avoids the Big D, but still ends up assassinated in Texas – – Austin.)  And a recurring storyline in season 2 involved Rittenhouse bringing Lucy’s great-grandfather, Nicholas Keynes, from the World War I battlefield to present day.

Not every mission ends up a home run out of the ballpark.  What other botched missions led to anachronisms that the team had to fix?  I’m glad the show didn’t rely on this too much (we have Legends of Tomorrow for that, after all) but when done right, it’s a fun concept.

The 2018 TV movie ended the show on a happy note: Rittenhouse defeated, Wyatt and Lucy (and Rufus and Jiya) married, the time travel team still intact with the Lifeboat there just in case. But the final scene left that door for more Timeless open a crack: a young girl in her bedroom, working on plans for a time machine before being called to dinner.   Could this be Rittenhouse 2.0?  Some other threat? A new member of the team with retirement of one of the core three?  An upgraded time machine that could bend the ideas of time travel even further?  The possibilities are endless, much like time.

If you have ideas for a Timeless comic that I didn’t cover, share them in the comments!  The show is currently available to stream on Hulu in the United States, Global TV in Canada, and select other countries on Netflix. 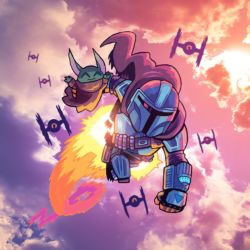 We Want Comics: The Mandalorian

[Featured image by Dan Hipp]Despite the fact that the show has been an incredible hit for a year now, we still have not seen Lucasfilm/Marvel bring The Mandalorian to comics yet. Although there have been announcements of ‘Mandalorian-inspired’ comics from both IDW and Marvel, no actual series have been announced yet. With the news of […] 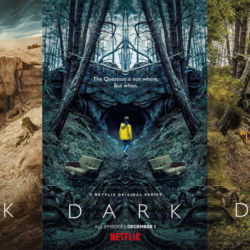 Welcome back to We Want Comics, a column exploring intellectual properties, whether they’re movies, TV shows, novels or video games, that we want adapted into comic books. Today, we’re looking at the masterful German Netflix series Dark (2017 – 2020), after spending half the year examining all 26 episodes. Dark is near-perfect television, a torturously […]