These issues of “X-Factor” were subpar, but I still enjoyed the hell out of them. And hell is the operative word, because both stories dive into the demonic side of the Marvel universe. With a great collection of ghouls and hellspawn, you’d hope for a great time, but various comics crafting concerns make these issues sort of average. Then again, there’s a lot to like! You know what, let’s parse the specifics as we continue to read “X-Factor.” 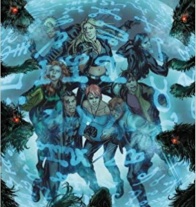 At this point in “X-Factor,” Peter David has really found his groove. He’s got a solid core cast of characters, and he’s mastered everyone’s voice. He’s seeded a lot of conflicts, and continues to do so even while paying off other simmering plots. Basically, this book feels like it could function on autopilot at this point in the run. And I guess that’s a good thing, because honestly, this was a pretty weak story. Earlier in the run, that could have sunk the series. But this far in, and with all the context, there’s still a lot to like.

Basically, this is the story of the birth of Rahne’s kid. Now, I as an individual don’t possess a womb, or children of any kind, so I’m no expert in sensitively telling stories about childbirth. That being said though, the amount of body horror that goes into this birth (and the last one!) seems… cruel. Maybe it’s because we just had a tragic and messed up pregnancy story with Theresa, but we’ve gone back to this well too many times.

Still, David might write my favorite version of Rahne ever, and she’s the star of this story. I honestly feel like he really captures her duality. Her religious upbringing was terribly abusive, but the faith it instilled in her is very real. She’s going to spend the rest of her life untangling that. Some writers prefer to revert characters to their favorite versions, but here you see a Rahne who’s fought alongside Asgardians, survived the Genegineer’s experiment, engaged in inappropriate relations with one of her students, and joined a black ops assassin squad. You get that all of these experiences happened to one individual, who is trying to live in the now.

The story as it happens, is a total mess. Everyone wants Rahne’s baby, because of a prophecy that is never explained. This acts as an excuse for a number of supernatural threats, who are thinly sketched to non-existence. Some of them, like Bast or Cerberus, you’ll recognize from mythology. Others, like Hela’s brother Agamemnom (who never is explicitly named in these pages), will leave you scratching your head. Basically, it’s a big messy chase. Rahne is being protected by Jack Russell, the Werewolf-By-Night, and the two of them are on the run from myths and monsters. X-Factor is on their trail, fighting those monsters. Oh and Feral, a widely disliked character from early X-Force shows up as an unexplained ghost. I know every X-Men character is someone’s favorite and that’s beautiful, but if Feral is your favorite, then buddy, you’ve gotta reassess.

The story ends with Rahne barfing up her baby like a hairball, and disgusted, she renounces the kid. There’s a final scuffle, and Jack Russell ends up with the baby, and everyone else goes their separate ways. After a bunch of vaguely motivated visceral horror, it’s a wet fart of an ending. There’s no reason for the chase to suddenly end like this, and Feral’s ghost presence is more aggravating than intriguing.

But damnit if this isn’t a lot more fun than most messy stories. The cast still has crackling chemistry, and in the middle of the mess are some memorable moments. Shatterstar has a great one, when he swings on a lamppost. He just discovered musicals and though Rictor doesn’t want to “be a stereotype,” ‘Star thinks Gene Kelly has a lot to offer to students of combat. Amazing. Also, most of the action of the story takes place in Oneonta, New York, a beautiful part of the country where I used to spend my summers. That brought a smile to my face. 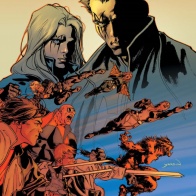 At least this one was more focused. We open with a Point One issue, something that’s already weird to explain. It was this weird initiative Marvel was doing around this time, but as with most Marvel initiatives, they had no follow through, so the concept ended up getting stretched thin beyond recognition. At this point in time, Point One issues were supposed to be jumping on points (sorry, that’s a lot of points) and honestly this one works pretty well.

X-Factor is on a simple job in Jamie’s hometown in Kansas. Well, relatively simple. There’s an old lady who ends up being a demon, and most of the team has to work together to take it down. Meanwhile, Jamie and Layla explain the premise of the series to the woman who now lives in Jamie’s childhood home. On the last page, that woman is murdered. Good hook!

There’s also a coherent theme to the mystery. I guess there are two themes. Demons from hell continue to threaten X-Factor, and they’re tied to a Hollywood satanist. One of the worst kind of satanists! The whole thing ends with the team facing off with a bonafide demon on the lot of a major studio. They gotta team up with that satanist to defeat the demon and save his son. The clarity of the mission makes this story a bit more readable than the last one, but it doesn’t shine as brightly as the last few arcs.

Part of this is how perfunctory a lot of the conflict ends up being. Satanists and demons are interesting, but at the end of the day, I don’t care that much about their fate. The final fight is competently done, but again, there’s not a lot in the way of dramatic stakes. Which is ironic, because Madrox literally dies in this fight. More on that in a sec.

Both the success and failings of these issues can be credited, at least partially, to artist Leonard Kirk. The art style is a bit of a departure for de Landro and Raimondi, but I mostly like it! Kirk is a lot more cartoony than those other guys, feeling a lot closer to Bruce Timm and the style you’d see in a 90s saturday morning cartoon. It does a great job at setting the mood, especially when stuff takes a turn for the creepy. But while Kirk sets a mean tone, his action can be pretty hard to follow. In cramped quarters, it gets hard to keep an eye on the many combatants, and once limbs are flying off and tentacles are whipping around, it feels closer to Guernica than Jim Lee.

What we’re left with is a good script that’s a poor match for the artist. So much of this story is a big superhero fight where lots of people stop to yell at each other. Layla’s resurrection of Guido is unearthed, and the gang learns that Mister Carosella is sans his soul, which they find rather distressing. Big development, but it happens while they’re trying to kill a body hopping demon called Bloodbath, and the dramatic weight slips away from the scene.

We’re left with most of the plot neatly resolved… ish. Bloodbath is sent to hell when Layla suddenly remembers how to do an exorcism. The team needs to contend with the knowledge that Guido is soulless. The satanist is reunited with his son so… yay? But Jamie is still dead. At least, that’s what things look like on the outside. Jamie actually finds himself in the vision Rahne had… in a room with a dead Layla wearing a wedding dress. Also, the next story has the evocative title of ‘They Keep Killing Madrox’ so, I’m guess Jamie’s apparent death is much less final than his compatriots fear. Guido’s soul on the other hand…