Sean Delonas, an editorial cartoonist for Albuquerque Journal published a controversial piece earlier this week. The cartoon portrays a white couple being robbed by what would appear to be two Latinx gang members in a dark alley. 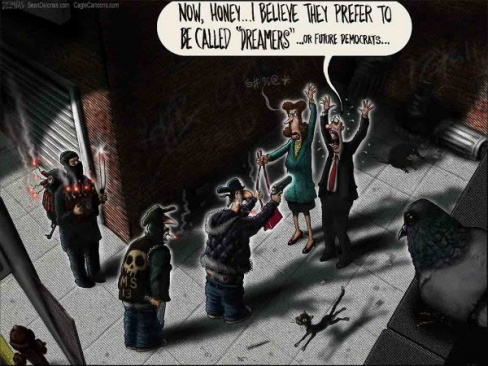 Delonas also depicts a man off to the side wearing a suicide bomb vest for seemingly no other reason than to indicate he is dangerous. Although being robbed, the victimized white couple manages to say “Now, honey, I believe they prefer to be called ‘dreamers,’ …or future Democrats.” Since being published, the cartoonist and the publication have been under fire from readers on both sides of the political spectrum.

According to the The Washington Post, “The cartoon’s publication prompted a wave of outrage from immigrant advocates, bipartisan lawmakers and hundreds of readers.” The cartoon comes at a time when tensions are high, as the debate between Republicans and Democrats on immigration laws rages on in Washington. Congressional Democrats continue to push for protection for young “dreamers,” undocumented immigrants who arrived in the U.S. as children. Unless congress passes a bill that would permanently protect these “dreamers,” they risk deportation as Deferred Action for Childhood Arrivals (DACA) is set to expire in March.

Although the editor of the Albuquerque Journal issued an apology, readers were not satisfied and continued their criticism of the publication’s cartoon, prompting yet another apology issued on Thursday, which again had little effect as “One protester, Margarita Maestas, even walked into the newsroom to cancel her 17-year subscription, according to the Journal. ‘It labeled our Dreamers as criminals,’ she said.” Roberto E. Rosales, a Journal photojournalist who works for the publication, tweeted some damning words:

As a photojournalist from El Salvador who by the way condemns MS-13, and works at @ABQJournal how do you think this cartoon makes me feel? Pathetic! pic.twitter.com/JRkfdV8iuA

Delonas is no stranger to controversy, as many of his past cartoons have provoked outrage due to his offensive content. Delonas seems to revel in his controversial posts, taking to Facebook asserting “Today, U.S. Senators and state lawmakers (all Democrats) from New Mexico took time out of their busy pay-to-play schedules to condemn me,” he wrote. “Always enjoyed upsetting politicians, makes me feel like I’m back at the NY Post.” Mr. Delonas may have been misinformed as many of his critics are bipartisan.