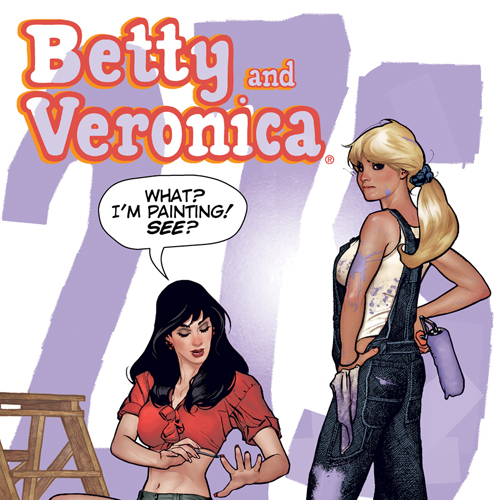 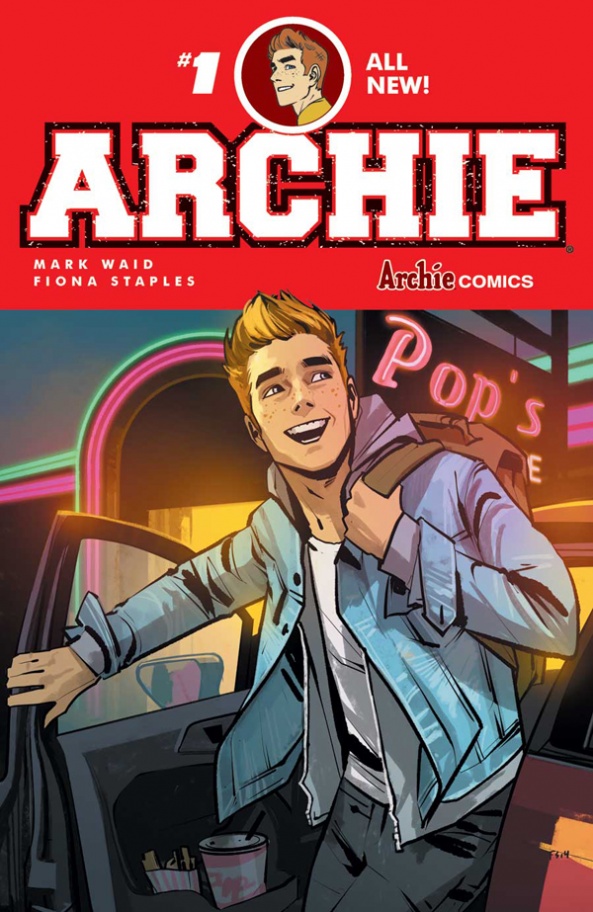 Archie Comics has taken to Kickstarter to fund three new titles to follow their yet-unpublished-but-already-successful “Archie” revamp by Mark Waid and Fiona Staples coming in July. The trio of titles are: “Betty and Veronica” by writer/artist Adam Hughes, “Life With Kevin” by writer/penciller Dan Parent and inker J. Bone, and “Jughead” by writer Chip Zdarsky and an artist yet to be determined. Archie is looking for a total of $350,000 to make this happen, and will roll out these titles over the next 6 months if successful.

I had a few knee-jerk reactions upon reading this announcement. Let’s see if any of mine match up with any of yours:

As I got over the sticker shock and actually thought about each of those for a minute, this seemed less like a head-scratching move and more like a continuation of what we’ve been praising Archie Comics for doing as a publisher for quite some time now. 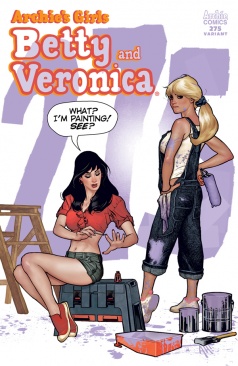 Betty & Veronica by Adam Hughes
(worth every penny)
$350,000 is a lot of money, no doubt about it. But this campaign is set up to fund three separate titles, each of which is staffed by top-name industry talent and that talent does not come cheap (nor should it). One of the aspects of comics that fans seem to either forget or never think about in the first place is that comics cost money to produce, and creators’ pay rates factor in to every decision made about who works on which title. For example, I’m sure one of the reason Adam Hughes does so little interior work is, aside from personal preference and scheduling, few publishers (such as DC and… well, DC) can afford to commission that much work from him at his going rate. So kudos to Archie Comics for not only pulling the trigger on the no-brainer of putting Hughes on a book with two female leads but also not balking at the cost of doing so. Yes, they’re passing that cost on to the consumer a little earlier than usual with this Kickstarter, but this is essentially pre-preordering the title, and I’ve got zero problem with that for not only Hughes, but Zdarsky, Parent, or Bone. All the creators involved in this launch so far are just as pitch-perfectly matched as Hughes to the title we all would want to see them on.

Archie Comics is an established publisher and an aggressive publisher, but not necessarily a large publisher. So while we tend to think of Kickstarter as something more for self-publishers than movie studios and their adjuncts, conceptualizing this as a way for Archie to mass pre-order these books before they even assemble them for Diamond solicitations seems to make sense. Archie Comics is playing to its strengths with this campaign: they are large enough as a publisher that they have truly iconic characters to market, but small enough that this type of outreach doesn’t feel like milking the fans.

Regarding Adam Hughes’ commitment (probably the only thing approaching a red-flag for this endeavor) Archie Comics publisher Jon Goldwater mentioned in an interview that Hughes will be onboard the “Betty and Veronica” series, “as long as he wants to be…doing interiors for the first arc and probably alternating with someone else as we get further into the run.”

And just in case you were still skeptical about Archie Comics hitting their $350K goal on this, they’ve already received over $12K in their first 3 hours, including $2K in the time it took me to type out this post. So get ready for some Riverdale expansion, because this thing looks like it’s gonna happen.

UPDATE 1: Senior VP of Marketing Alex Segura posted this update to the Kickstarter, giving a little more background into the campaign’s origin and their need for an accelerated (and unanticipated) release schedule to capitalize on rack space opening up in Target and Wal-Mart stores.

Also, writer/artist Colleen Doran raised a valid question about the campaign on Twitter this afternoon:

OK, no skin off my nose of Archie Comics wants to rebuild w/ a kickstarter, but how does any of it benefit the creators of the comics?

@gregmatiasevich What I'm saying is, what are the benefits? When I worked there, there were no benefits. No royalties. Has this changed?

@gregmatiasevich Archie Comics had a low page rate work for hire agreement with no benefits and very punitive clauses. Have they changed?

@gregmatiasevich If so, great. But if not, what incentive should anyone have to support this corporate comics structure on kickstarter?

@gregmatiasevich Last time I saw an Archie contract, there were no creator benefits outside of the low page rate, and very punitive clauses.

@gregmatiasevich If Archie has better creator relations, then that should be a selling point on their kickstarter: we take care of creators.

@alex_segura @ArchieComics …talent share in the (hopeful) success of the launch? Do they get royalties? Just page rate? Or some other…

@KurtBusiek @ArchieComics Hi Kurt! Creators will, of course, be compensated fairly. Not going into the specifics in a public forum, though.

While Segura has done a solid job in making this venture as transparent as possible with some rapid-fire KS updates and info Tweets, there is a limit to how much he and Archie Comics can and will discuss ‘in a public forum’. But I’m glad to see him addressing this positively as soon as it is brought up. Today’s got to be quite the learning experience for him and the folks at Archie Comics.

UPDATE 3: While fans & readers are excited these titles and showing their support on the ever-climbing Kickstarter pledge total, some comic retailers aren’t quite as enthusiastic with the way Archie Comics is handling this new venture.

It feels worth noting that Archie has always had a strong presence outside of the traditional LCS market. I’m sure there will be a lot more discussion about this over the next few days.

For the full press release from Archie Comics, see below.

Publisher to launch new JUGHEAD, BETTY & VERONICA and LIFE WITH KEVIN comic book series with help of dedicated fandom
New York, NY (May 11) – Archie Comics, the acclaimed and bestselling comic book publisher that is home to some of the best-known pop culture creations in the world, including Archie, Jughead, Betty & Veronica, Josie & The Pussycats, Sabrina the Teenage Witch and the hit AFTERLIFE WITH ARCHIE series, announced today that it would launch a historic crowdfunding campaign via the popular Kickstarter platform.

The Kickstarter campaign’s call to action is a simple one: Help Archie Comics build a New Riverdale. Specifically, the Kickstarter will ask fans to help fund a slate of titles that build off the surefire success of ARCHIE #1 ­­­­­— the debut issue of a new, ongoing ARCHIE series from writer Mark Waid (Daredevil, Kingdom Come) and artist Fiona Staples (Saga). The series will be crafted by some of the biggest names in the comic book industry and feature the most beloved characters in comic book history.

The three new titles, launching over the next 18 months, include:

BETTY AND VERONICA — Girl-next-door Betty Cooper and wealthy socialite Veronica Lodge are best friends and fiercely competitive. While they both have a history with that guy Archie, the series puts the focus squarely on them — their friendship, their high school lives and adventures beyond Riverdale. Written and drawn by comic book legend Adam Hughes (Wonder Woman, Before Watchmen: Doctor Manhattan).

LIFE WITH KEVIN — Kevin Keller, the hugely-popular and historic character that broke new ground in Riverdale by being the first gay character in the company’s publishing history returns in a new ongoing series. Writer/artist Dan Parent (Kevin Keller) and inker J. Bone (The Spirit) tell a tale of an older, more experienced Kevin as he navigates a new city, new romance and leaving home.

“Our fans are part of our family — they’re an integral part of everything we do,” said Archie Comics Publisher/Co-CEO Jon Goldwater. “We’re not flush with corporate cash like Marvel or DC. But we’re also not afraid to take calculated risks. With this Kickstarter, fans have the chance to get in on the ground floor of an exciting and forward-thinking initiative. Fans can help build a New Riverdale, brick-by-brick. We’ve put together a stellar lineup of titles — featuring the best and the brightest creators working on our top characters. With your help, we can make this New Riverdale a reality. The best part? This is only the beginning.”

The crowdfunding initiative marks the latest part of the company’s 75th anniversary celebration — while also marking the beginning of a new era for the long-running publisher. With the launch of ARCHIE #1 on July 8, the company will be poised to reimagine its core characters while retaining the humorous and edgy elements that made them instant sensations when they first appeared.

“When I first stepped into the Archie offices, the brand was frozen in time. The stories felt stiff and dated. That’s no longer the case,” Goldwater said. “This is a new Archie. A new Jughead. A new Betty and Veronica and a new Kevin. We’re holding onto the things that made them great — the humor, the love triangle, the friendship and youthful exuberance — but presenting them in a way that can appeal to everyone, from classic comic fans to new readers who might not know every nook and cranny of our history. Each part of this is a brick that will help build a New Riverdale. But we can only do it with your help.”

ABOUT ARCHIE COMICS:
Archie Comics is the leading mass market comic book publisher in the world and the home to a wide array of the most popular humor, action-adventure and superhero characters in entertainment, including Archie, Jughead, Betty and Veronica, Reggie, Kevin Keller, Josie and the Pussycats, Sabrina the Teenage Witch, Afterlife With Archie, the Dark Circle Comics superhero characters (The Black Hood, The Fox, The Shield and more), Li’l Jinx and many more. Archie Comics have sold over 2 billion comics worldwide and are published around the world in a number of languages. In addition to comics, Archie characters have been featured prominently in animation, television, film and music. Follow Archie Comics on Twitter, Facebook, YouTube and the Archie Comics Store.