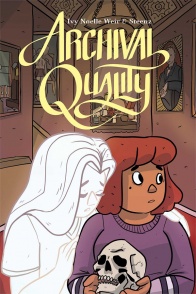 Deadline reports Ivy Noelle Weir and Christina “Steenz” Stewart’s graphic novel “Archival Quality” has won the 2019 Dwayne McDuffie Award for Diversity in Comics. The young adult book, published by Oni Press last year, tells the story of Cel Walden, a former librarian who starts working at the Logan Museum. While there, “she finds herself confronting her mental health, her relationships, and before long, her grasp on reality as she begins to dream of a young woman she’s never met, but feels strangely drawn to. Especially after she asks Cel for help.”

The Dwayne McDuffie Award for Diversity in comics has been awarded by a panel of judges at the Long Beach Comic Expo every year since 2015, in memory of the late writer, who passed away in 2011. This year’s other nominees were:

You can read Ivy Noelle Weir and Steenz’s reactions to their win on Twitter here and here. Congratulations to the winners and nominees!