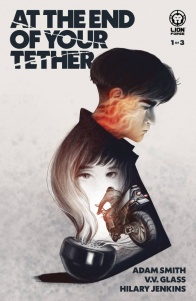 According to The Hollywood Reporter:

When a troubled teen returns home to be reunited with the one person he made a connection with in his youth, he discovers that she’s been missing for a week — even though he just spoke with her on the phone the day before. As he starts investigating her disappearance, it becomes obvious how little he, or anyone else, knew her, leading to his being faced with two important questions: Where is his best friend — and who is she, as well?

“At the End of Your Tether” will be a three-issue miniseries, which will debut in comic stores and digitally this June. The series will be released in Lion Forge’s “double issue” format, with each issue being 48 pages long. Head on over to The Hollywood Reporter for an exclusive sneak peek at the comic’s first issue.