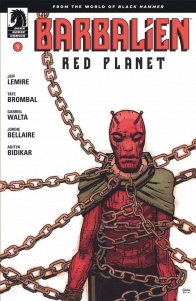 More precisely, “Barbalien” will take place during the AIDS crisis in the 1980s, and show Markz living as a superhero and a human cop. Struggling with his closeted sexuality, Markz begins to fall in love with Miguel, an activist who makes him question his own actions. And if that wasn’t enough trouble, Markz finds himself being hunted by an old enemy from Mars, who’s determined to bring back to the former warlord to their homeworld, dead or alive.

“Barbalien: Red Planet” is the latest in a number of “Black Hammer” series, following on from the original 2016 series by Lemire and artist Dean Ormston for the 2016 series of the same name. Another spin-off, the four-part “Colonel Weird: Cosmagog,” will run concurrently after launching in April.

The first issue of “Barbalien: Red Planet” will be released physically and digitally to coincide with LGBTQ Pride Month on June 24.