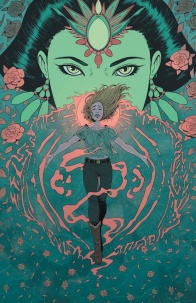 THE GIRL IN THE BAY begins in the 1960s when a young woman is murdered and her body is dumped in the bay. She later climbs out of the water and finds that fifty years have passed and that a doppelgänger has been living her life since her murder.

This will be the first project from DeMatteis at Dark Horse since 1986’s “Dark Horse Presents” #2. He and Berger have been friends since college, and the two collaborated together when she was the editor of Vertigo on graphic novels like “Mercy.”

Howell, meanwhile, has contributed to several creator-owned books like “Kill Shakespeare – Past is Prologue: Juliet,” and “The Mighty Zodiac,” but is best known for penciling various licensed titles at IDW Publishing like “The Transformers: Windblade,” “Back to the Future” and “The X-Files: Origins.” At the panel, Howell mentioned she has been listening to a lot of music from the ’60s and ’70s to put herself in the mindset of drawing the book.

Per a press release, “The Girl in the Bay” #1 will be released February 6, 2019. For more from this year’s Berger Books panel, head on over to our social media manager Kate Kosturski’s livetweet of the announcements and Q&A here.