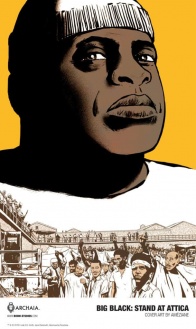 BOOM! Studios imprint Archaia have announced “Big Black: Stand at Attica,” a retelling of the 1971 Attica State Prison riot (in Attica, New York), as told from the perspective of one of the uprising’s leaders, Frank “Big Black” Smith. The book, written by playwright Jared Reinmuth and illustrated by French artist Améziane (“Muhammad Ali”), will be published in February 2020.

Reinmuth said, “I was a small child [in September 1971] sitting in the living room with my brother and sister as the events at Attica played out on television. My mother vowed that if we were ever in a position to contribute, we would help the Attica Brothers. Frank ‘Big Black’ Smith was our hero, and [the fact that] decades later he and his wife, Pearl, would trust me to attempt his biography stands as the honor of my life.”

“Big Black: Stand at Attica” began as a collaboration between Reinmuth and Smith in 1997. Smith, who worked as a paralegal advocate for other survivors and family members of those who were killed during the riot, died of cancer in 2004, and the project became dormant until 2017, when Reinmuth was convinced by his friend Patrick Kennedy to tell Smith’s story as a graphic novel. Améziane said, “Jared felt certain that the biography of a legendary Attica Brother, Frank ‘Big Black’ Smith, was the perfect book for me. He was 100% right. Together, with the support of Frank’s family and those who for decades stood with the Attica Brothers, we strove humbly to do justice to a story much larger than ourselves. I couldn’t be more proud to present it to you.”