The saga of Bloodshot continues, this autumn, with the surprise additions of white supremacy and fatherhood to the story. Ahead of Emerald City Comicon this weekend, Valiant announced today a new series, “Bloodshot Salvation” from current “Bloodshot Reborn” writer Jeff Lemire and artists Lewis LaRosa and Mico Suayan. “Reborn” is scheduled to end with issue #0 on March 22.

Lemire has continued to use the ultra-violent 90’s taken to the extreme character of Bloodshot to tackle real world social and political issues. Most recently, “Reborn” has taken a hard look at gun violence and mass shootings with the same technology that powers Bloodshot infecting regular people causing them to turn into killers.

“Salvation” looks to be no different, following dual storylines that reflect the current uptick and acknowledgement of white supremacist groups in the midst and wake of the election of President Trump.

“It did always feel like that Captain America punching Nazis [moment] was a part of our past. I don’t think I would have ever anticipated the things that have happened over the last couple of years,” Lemire said. “It’s certainly kind of still shocking and in the moment. I never really thought I’d be commenting on this stuff the way I am or feeling compelled to, that’s for sure.” 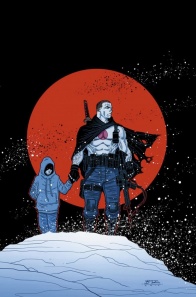 The present day story (with art from LaRosa) follows Bloodshot and the love of his life, Magic, pregnant and being hunted by the white supremacist cult she was raised in. Then, eight years later in the future (with art from Suayan) Bloodshot and his daughter Jessie are adjusting to her powers and abilities, similar to Bloodshot’s, on the run from a shadowy organization called “Omen.” The future storyline also will deal with the tension bringing a child into a world of violence and the struggle of parenting.

This is the second title in Valiant’s newest Icons initiative, joining the soon to be released “X-O Manowar” title from Matt Kindt in a few weeks. Icons teased titles related to Faith and Shadowman all leading up to 2018’s “Harbinger Wars 2.” Look for more information coming from ECCC this Sunday, March 5th at 2:30 pm at the Valiant: Road to Harbinger Wars 2 panel. “Bloodshot Salvation” gets a prelude story in the “Valiant: X-O Manowar FCBD 2017 Special” before issue #1 – with a cover by Ryan Boddenheim – debuts September 28th in both print and digital.