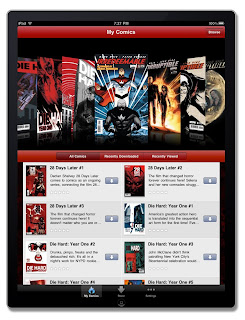 When the iPad launched, comic fans all swooned over ComiXology’s Marvel app. Its ease of use and expansive library was one of the most universally praised apps native to the device, and now ComiXology has struck gold again with a BOOM! Studios app that launches today in the iTunes App Store. This app may be even more impressive than the Marvel one, as it will be feature an even slimmer window between street date in print and digital than Marvel offers. Not only that, but for those fans who are interested in trying out new books can sample half issues for most BOOM! titles for free today.

Check the press release after the jump for more.

June 14, 2010 – Los Angeles, CA – Today BOOM! Studios is pleased to announce the arrival of the BOOM! Studios Comics app for the iPad and iPhone in the iTunes App Store. Built on comiXology’s popular digital comic platform, the BOOM! Studios Comics app launches with a number of top pop culture-inspired titles including comics based on 28 DAYS LATER, DIE HARD and a word-for-word comic translation of Philip K. Dick’s DO ANDROIDS DREAM OF ELECTRIC SHEEP?, as well as BOOM! Studios’s top-selling original series IRREDEEMABLE, INCORRUPTIBLE and THE UNKNOWN.

“While comic-based movies are thriving on the big screen, the reality is most fans have never been exposed to comics books as a medium unto themselves,” said David Steinberger, CEO of comiXology. “Digital comics give us the opportunity to reach a broader audience and inspire them to connect with the comics community through titles they’re already passionate about.”

An innovator in the field, BOOM! Studios, in partnership with MySpace, was the first publisher to offer digital comic releases the day and date of print releases in 2008. BOOM! Studios was also one of the first comic book publishers to make comics available on the iPhone and Android mobile devices. BOOM! Studios continues its mission to fill the void between comic book culture and pop culture with digital distribution. With the release of the BOOM! Studios Comics app, the company marks a significant move toward engaging pop culture fans with the comics that have inspired by world.

Through the app, fans will have access to new issues of each current series, released on a regular basis, and BOOM! Studios’s entire back catalog in the coming months. The BOOM! Studios Comics app will also offer readers the first half of every first issue in each series for free.

“Comics have long since been the landscape for pop culture. So many comics have inspired movies, television and video games, but so few people have encountered the actual comic books that form the basis for that inspiration,” said BOOM! Studios Marketing Director Chip Mosher. According to Mosher, “comiXology has proven, time and again, that digital comics are the key factor in uniting these worlds and exposing the pop culture audience to comic culture. Now they’re helping BOOM! Studios do the same.”
With the BOOM! Studios Comics app, now available for free in the iTunes App Store (link to be included), BOOM! Studios fans and comic fans everywhere can experience some of the best comics available anywhere starting at $1.99 each.

BOOM! Studios (www.boom-studios.com) is a unique publishing house specializing in high-profile projects across a wide variety of different genres from some of the industry’s biggest talents, including Philip K. Dick’s DO ANDROIDS DREAM OF ELECTRIC SHEEP?, The Henson Company’s FARSCAPE, and the original Mark Waid series IRREDEEMABLE. BOOM! recently launched its youth imprint, BOOM Kids!, with Pixar’s THE INCREDIBLES, CARS, and TOY STORY, as well as Disney’s THE MUPPETS, DONALD DUCK, UNCLE SCROOGE and WALT DISNEY’S COMICS AND STORIES. This year, BOOM! Studios celebrates its fifth anniversary.

Recognized as a leader in digital technology development within the comic industry, comiXology continues to expose a wide-range of readers to the world of comics through quintessential comic resource comiXology.com and related applications. With more than 1,500 comics available, from over 30 publishers, the Comics by comiXology iPhone and iPad app provides a seamless comic book experience for fans. comiXology is digitally transforming the relationship between comic book readers, retailers and publishers while staying true to the industry’s rich history. For more information, please visit www.comiXology.com.