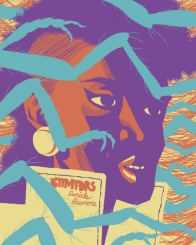 Cover by Ben Passmore
Fantagraphics Books have announced a new original graphic novel from Ezra Claytan Daniels and Ben Passmore entitled “BTTM FDRS.” A horror satire, the book follows Darla, a young black fashion designer, and her white friend Cynthia as they discover a deadly urban blight in a newly gentrified neighborhood of Chicago. Claytan Daniels and Passmore are both rising stars in the world of indie comics, with Claytan Daniels having written the award-winning “Upgrade Soul,” and Passmore having illustrated the critically acclaimed “Your Black Friend.”

When speaking about the book, Claytan Daniels said, “Writing ‘BTTM FDRS’ was a very therapeutic way to work through my feelings about issues like cultural appropriation, gentrification, and representation.” Passmore added that the book “combines my love for David Cronenberg style monsters and anti-gentrification.” Eric Reynolds, the associate publisher for Fantagraphics, said “I’m thrilled to have the opportunity to work with them. It’s a great book by two great creators who I feel are just entering their storytelling prime.”

Fantagraphics Books is known for publishing alternative comics, graphic novels, and magazines, including The Comics Journal. Notable releases from the publisher include “Ghost World” by Daniel Clowes, the “Anything Goes!” magazine anthology, and much more.