Since finding a new home at BOOM! Studios, “Buffy the Vampire Slayer” has featured some of the most impressive cover art of the past few years. A slew of really interesting main and variants by great artists have graced stands starting with February’s first issue. We are thrilled to share an exclusive first look at the main cover to June’s fifth issue, by Marc Aspinall. Aspinall is best known for his work for Mondo; here are some fantastic posters he did for Planet of the Apes, Star Wars: The Last Jedi, Goodfellas, and Captain America: The Winter Soldier. 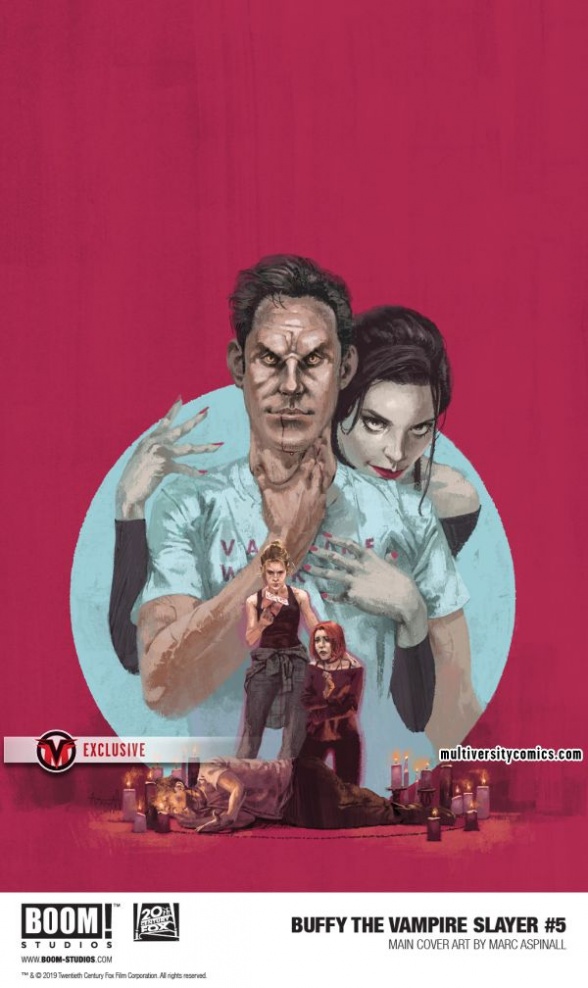 After the stunning events of Issue #4, the Scooby Gang tries to recover and deal with a new threat that’s arising within the very halls of Sunnydale High itself.

Xander Vamps Out On the Cover of BUFFY THE VAMPIRE SLAYER #5
“Slayers, vamps, witches, Watchers and innocent bystanders everywhere will want to follow this new era from day one.”—Paste Magazine

“It’s the full package, and it will leave Buffy fans eager for the next issue to arrive.”—ComicBook.com

“Things are starting to get pretty interesting in Sunnydale.””—IGN

LOS ANGELES, CA (May 16, 2018) – BOOM! Studios today, in partnership with 20th Century Fox Consumer Products, unveiled the BUFFY THE VAMPIRE SLAYER #5 cover by Mondo illustrator, Marc Aspinall, where vampire Xander and Drusilla look on as Buffy and Willow try to save Xander’s soul. This game-changing issue of the hotly anticipated series will debut in stores June 5, 2019, with a heart wrenching mission that Buffy must complete at all costs in order to save her friend.

The reimagining of Joss Whedon’s groundbreaking hit pop culture series kicks off a brand new story arc as Team Slayer deals with the devastating consequences of Xander becoming a vampire. Buffy and the Scooby Gang have lost one of their own to Team Vamp but what if there’s a way to get their friend back? The Slayer will walk the line between responsibility and rampage as she searches for anything that’ll bring back her friend, balancing her quest with her duties as the Slayer without losing anyone else in the process. What do you do when your entire purpose is killing vampires and your friend just turned into one?

Buffy The Vampire Slayer premiered on the WB Network on March 10th, 1997. The Emmy and Golden Globe-nominated series, which ran for seven seasons from 1997-2003, stars Sarah Michelle Gellar as “Buffy Summers.” Chosen to battle vampires, demons and other forces of darkness, Buffy is aided by a Watcher who guides and teaches her as she surrounds herself with a circle of friends called the “Scooby Gang.”

Print copies of BUFFY THE VAMPIRE SLAYER #5 will be available for sale on June 5, 2019 exclusively at local comic book shops (use comicshoplocator.com to find the nearest one) or at the BOOM! Studios webstore. Digital copies can be purchased from content providers, including comiXology, iBooks, Google Play, and the BOOM! Studios app.

ABOUT BOOM! STUDIOS
BOOM! Studios was founded by Ross Richie in 2005 with the singular focus of creating world-class comic book and graphic novel storytelling for all audiences. Through the development of four distinct imprints—BOOM! Studios, BOOM! Box, KaBOOM!, and Archaia—BOOM! has produced award-winning original work, including Lumberjanes, The Woods, Giant Days, Klaus, and Mouse Guard, while also breaking new ground with established licenses such as WWE, Mighty Morphin Power Rangers, Cartoon Network, and The Jim Henson Company properties. BOOM! will also bring their original series to life through unique first-look relationships with 20th Century Fox for film and with 20th Television for the small screen. Please visit www.boom-studios.com for more information.

Buffyversity: A Tribute to Kendra Young

For a character with so few appearance, Kendra Young sure left a big impact. She was the character that broke all the rules. Right in the show’s introduction it’s made clear- “In every generation, there is a Chosen One. She alone will stand against the vampires, the demons, and the forces of darkness. She is […]

Buffyversity: How They Make Comics

The ‘Hellmouth’ crossover is nearly wrapped up, and as these things go, it’s pretty epic. In the many season of the Buffy shows, we never did see the other side of the Hellmouth- turns out it’s Hell. I guess I shouldn’t be surprised. While Buffy, Angel, and Drusilla are descending lower and lower into the […]

The ‘Hellmouth’ event is running throughout “Buffy The Vampire Slayer” and “Angel,” and represents the first real crossover of the properties since BOOM! Studios got the license to the Joss Whedon-created properties. The event has been a lot of fun, something you can read all about in our Buffyversity columns. We are thrilled to share […]