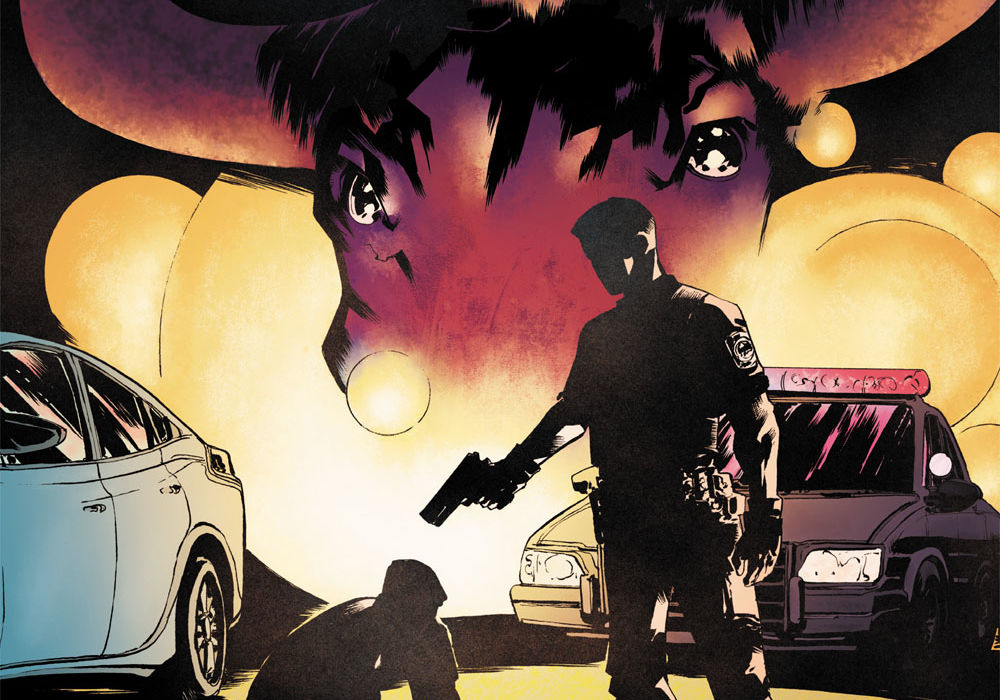 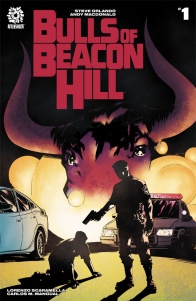 AfterShock Comics have announced “Bulls of Beacon Hill,” a searing crime thriller from writer Steve Orlando, artist Andy MacDonald, colorist Lorenzo Scaramella, and letterer Carlos M. Mangual. The comic follows Doctor Christopher Boldt, a surgeon running for Boston City Council. Unbeknown to the wider public, his father, Orin Paige, is one of Boston’s most notorious gangsters. Until now, Paige had been happy “to deny any connection to his queer son, who he sees as a liability in the mob world. Now, Chris’s political aspirations have put father and son on a collision course. A collision course bathed in blood.”

Orlando describes the book as a chance to revisit the crime genre, as well as his grittier superhero comics like “Midnighter.” He says “Bulls of Beacon Hill” is “inspired by iconic action, crime, and revenge narratives: The Departed [the remake of Infernal Affairs], The Count of Monte Cristo, Oldboy, not to mention the explosive fuel that is machismo, and the iconic father/son feuds found in professional wrestling – Flair versus Flair for one generation, Mysterio versus Mysterio for another.”

MacDonald adds the book “is a story inspired by actual events – real, bloody, gritty events. My approach is to bring as much of that blood, sweat and grit into the visuals as possible, amping up the heavy shadows of deadly noir and setting them against finer lines of the softer moments that make life worth living. It’s an attempt to visually translate the hard work that we need to sometimes be able to enjoy the most important parts of living.”

“Bulls Of Beacon Hill” #1 will be released on January 4, 2023, with a main cover by MacDonald, and an incentive cover from Pablo Raimondi with colorist José Villarrubia. It will retail at 32 pages for $4.99. In the meantime, check out an unlettered preview — which reveals just how abusive of a father Orin was — as well as an official Q&A with the creators. 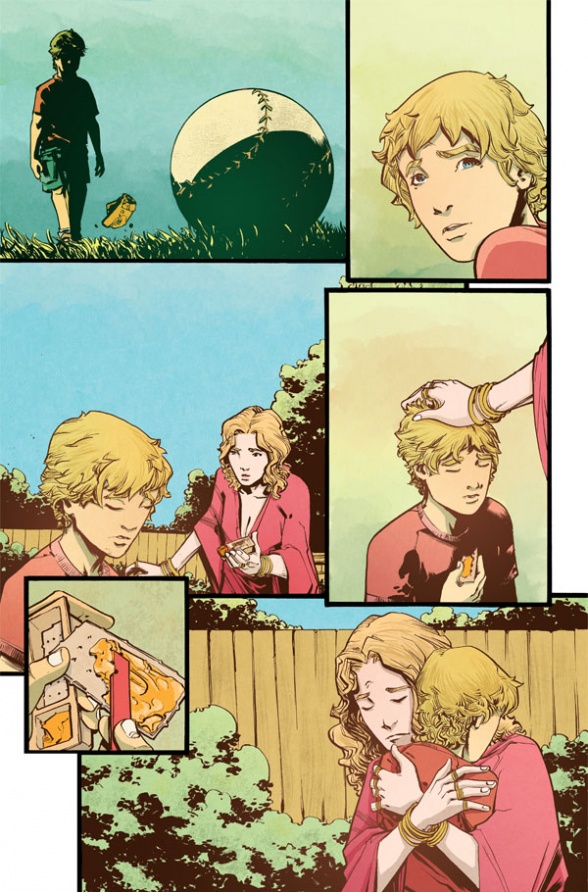 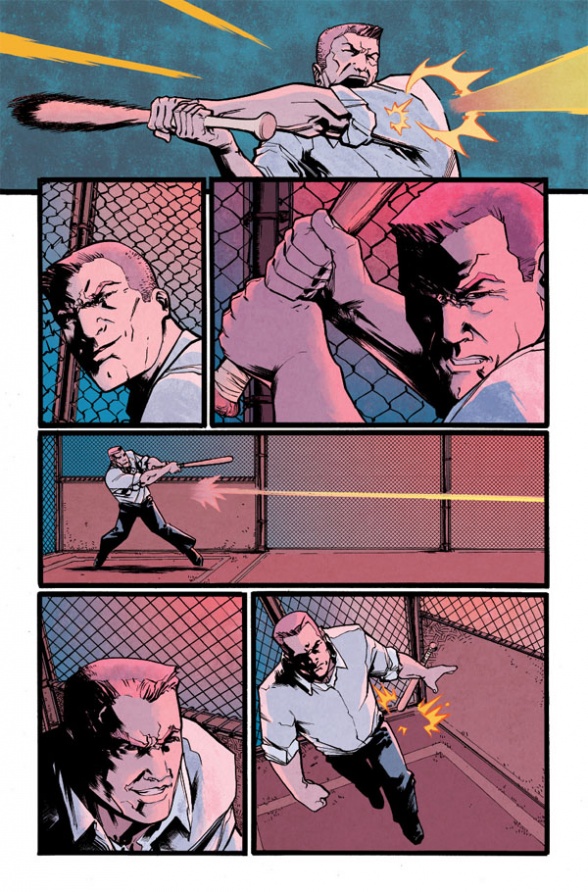 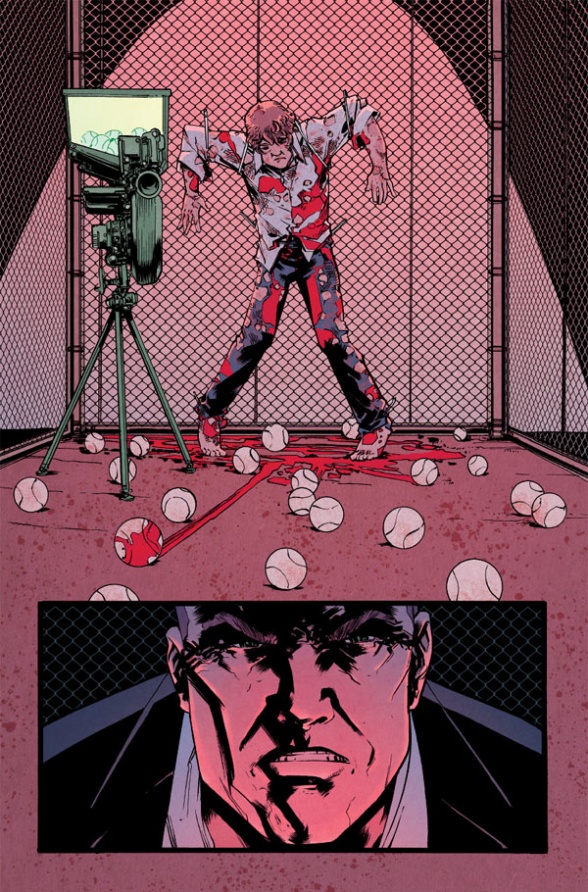 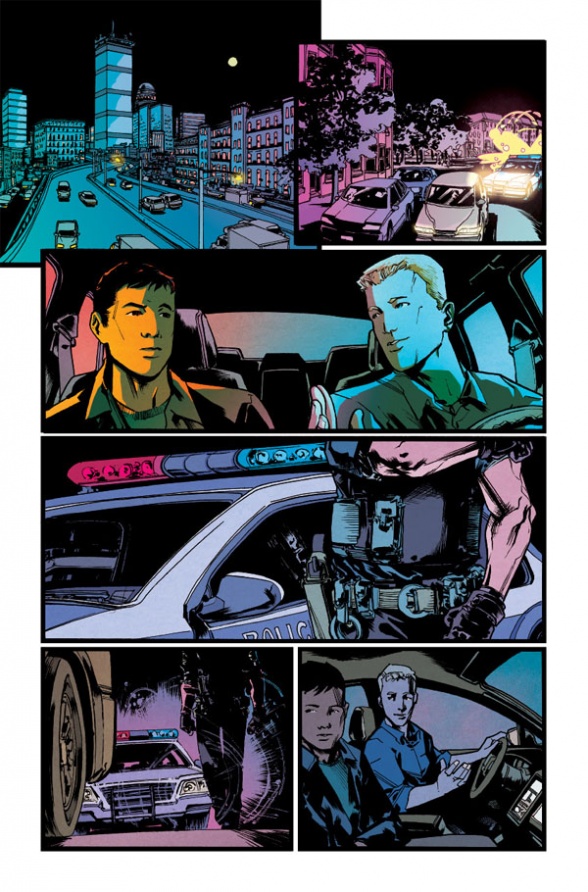 STEVE ORLANDO ON WHAT THE BOOK IS ABOUT AND WHY HE IS EXCITED FOR IT TO COME OUT:

“BULLS OF BEACON HILL is a chance to return refreshed to a genre I’ve missed for a long time, one of the genres that helped get me in the door in the comics business: revenge! BULLS follows surgeon Chris Boldt and his father, construction mogul and rumored crime boss Orin Paige. For years, there’s been a slow simmering dislike between father and son, but when Chris decides to run for city council… the match is struck. Orin does the unthinkable, using his mob connections to blackmail an off-duty cop into attacking his son. Orin can’t risk Chris going through with his campaign, knowing having a queer son in the macho mob world would make him vulnerable. That’s why Paige even lies to the cop he’s sent on the hit. But the lie blows up in his face when Chris becomes enraged and fights off the attack long enough to reveal the truth about him and Orin. BULLS follows Chris as he races to get back at his father and dismantle his organization. For a son attacked by his father, this is one last, long night of revenge, leading into a morning of professional, personal, and political victory… if he can survive long enough to welcome it.”

STEVE ORLANDO ON SOME OF HIS INSPIRATIONS BEHIND CREATING THE BOOK:

“For many, the concept of family is a concept steeped in obligation – sometimes it can feel like the expectations and responsibilities are too much to handle. And what’s worse is when one’s duty to themselves stands in direct conflict to duty to family. Too common is it a concept that what could be a safety net instead becomes a trap, and from those moments comes BULLS OF BEACON HILL – father and son, charging at each other. Here, we have an action epic inspired by the slow simmering grudges that so often touch our relationships, which in this case come with a bloody, apocalyptic fuse. We’re inspired by iconic action, crime, and revenge narratives: The Departed, The Count of Monte Cristo, Oldboy, not to mention the explosive fuel that is machismo, and the iconic father/son feuds found in professional wrestling – Flair versus Flair for one generation, Mysterio versus Mysterio for another. But hot blooded and devastating no matter the time.”

STEVE ORLANDO ON ONE PIECE OF ADVICE HE’D GIVE TO HIS YOUNGER SELF:

“I wish I’d so much sooner learned the importance of patience, which I’m still mastering more and more every day (we hope) and, most of all, the difference between niceness and kindness. Niceness hides the knife!”

STEVE ORLANDO ON (3) REASONS WHY COMIC READERS SHOULD PICK UP THIS NEW BOOK:

1. Andy MacDonald, above all. Justice League of America never showcased the blockbuster action and violence dealt by the hands of Lobo like it did under Andy’s pen. And now, he’s bringing that same style of meaty massacre to an all-new original story with an intensity even deeper engrained in every panel.

2. A return to form! For folks who came to know me for my particular brand of queer revenge and badass violence in Midnighter and Virgil, we’ve now got a spiritual sequel steeped high in brash manly chest beating and vendetta driven ass-kicking. This one breaks heads in all new ways!

3. The betrayals! BULLS OF BEACON HILL is built on one of the deepest betrayals possible, that of a parent attempting to kill one of their children. There’s almost no fuse more volatile, and no revenge more explosive.

Bonus – You can create your own Boston accents.

ANDY MACDONALD ON APPROACH TO DOING THE ART FOR THIS BOOK:

“BULLS OF BEACON HILL is a story inspired by actual events – real, bloody, gritty events. My approach is to bring as much of that blood, sweat and grit into the visuals as possible. amping up the heavy shadows of deadly noir and setting them against finer lines of the softer moments that make life worth living. It’s an attempt to visually translate the hard work that we need to sometimes be able to enjoy the most important parts of living.”

ANDY MACDONALD ON IF HE HAS A FAVORITE PAGE OR PANEL FROM THE FIRST ISSUE AND, IF SO, WHICH ONE AND WHY:

“There’s a few, but I think that page 17 holds up as a standalone story all on its own. Most of the credit goes to Steve Orlando for writing scripts that bring entire worlds of existence to a single scene and lets them live in the details. The page is Chris Boldt’s mother at home, enjoying/coping/tolerating[?] her day, living in, and haunted by, her past. The phone rings with news that snaps her directly into the present with an urgent call for her to challenge the ghosts she’s been living with. And it’s just ONE page! I try my best to do justice to Steve’s script and I hope that this page is one of those times that I have succeeded.”

“The most challenging aspect of creating art for comics is not having enough time to make more of them in a day! I love drawing these things and wish that I could make more of them per month than I do. There’s a hundred stories that I wish I could work on but can only carve out so much time. The most rewarding aspect is the people I have met while collaborating on making comics. I love making these comics and seeing them in print on the shelves is fantastic, but I’m truly impressed by and honored to have met and worked with really good people. People that genuinely want to bring an idea or feeling to life in panels and translate that to a reader, ideally establishing a connection through the page.”