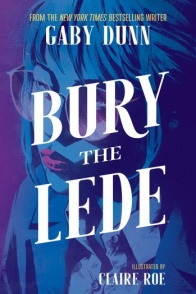 BOOM! Studios have announced “Bury the Lede,” an original graphic novel from author Gaby Dunn and artist Claire Roe. Set for release in October 2019, the book tells the story of Madison T. Jackson, a journalism student interning at the newspaper The Boston Lede, who befriends Dahlia Kennedy, a prominent socialite – and the chief suspect for the murder of the rest of her family. “Bury the Lede” is intended as the first in a new line of adult-aimed original graphic novels from BOOM!, marking a new direction for the publisher best known for young adult series like “Lumberjanes” and “The Backstagers.”

The book also marks the comics debut of Dunn, an author, journalist, actress and podcaster. With her comedy partner, Allison Raskin, she created the YouTube channel Just Between Us, and wrote the New York Times-bestselling novel I Hate Everyone But You. (She also written for the Netflix series Big Mouth.) Dunn stated she enjoyed writing “in a genre like crime that is so heavily male, [and] it’s been cool to make such a queer, colorful, realistic-to-my-own-experiences depiction of being a crime reporter.”

Claire Roe, meanwhile, is a Scottish comics artist who previously illustrated Christopher Sebela’s BOOM! series “Welcome Back,” as well as the first arc of Julie and Shawna Benson’s “Batgirl and the Birds of Prey.” Roe said, “We rarely get to enjoy these type of women in media, especially if they’re POC and queer, so getting to dive into this world and draw this story was right up my alley. I think true crime lovers will connect instantly with Madison, and will enjoy uncovering the motivations of the beautiful and enigmatic Dahlia.”

Head on over to The Hollywood Reporter for character designs and an interview with Dunn and Roe.