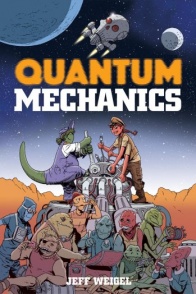 In the second of two big announcements today, Lion Forge revealed their newly unveiled middle-grade reader imprint, Caracal, will release “Quantum Mechanics,” the latest work from author and illustrator Jeff Weigel (“Dragon Girl”). The graphic novel follow two kids that have been “snatched from their humdrum lives on a barren asteroid by a dread space pirate and forced into a conflict that could change the future of their space quadrant forever.”

The book, which will be released this October, marks the first release by Caracal, the creation of which was announced last month: previously published titles like “The Wormworld Saga” and “Sheets” are also being republished under the name.

Lion Forge editor-in-chief Andrea Colvin says “’Quantum Mechanics’ was one of my very first acquisitions at Lion Forge, and I’m so glad its publication is coinciding with the launch of our new Caracal imprint.” She also praises Jeff Weigel, saying “Jeff really knows middle-grade readers, and with this story he’s created a deeply fun and exciting science-fiction world in which girls gets to save the day with their knowledge of mechanics and engineering.”

The book which is largely aimed at readers 8-12 years old, will be released in comic book stores on October 10, while getting a wider bookstore release on October 23, 2018.