A new creative team has been announced for the ongoing “Aquaman” series. The new team will consist of Kelly Sue DeConnick, in the role of writer, and Robson Rocha (“Green Lanterns”), in the role of artist. Currently, there is no artwork for the series released, nor a schedule for its release, but the pair will be taking the reins on the series from Rebirth writer Dan Abnett, who is solicited for issue #40 in September. 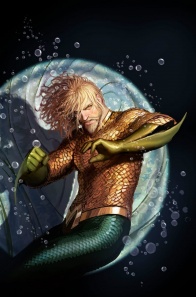 The new team will follow Aquaman after he wakes up and finds himself washed up on an island with no recollection of his identity. As he tries to rediscover who he is, he finds that he is not alone on the island: there are former sea gods, who have been forgotten by their worshippers, also marooned there. The series’s first arc will also deal with the relationship between Aquaman and his mother, Atlanna.

Jim Lee, DC’s CCO and Co-Publisher, described the series as being in the same vein as other classic stories, such as “Daredevil: Born Again” and “Batman: Year One.” It is intended to be an “examination of who the character is.”

The announcement of a new creative team for Aquaman comes hot on the heels of other changes to DC’s top titles, with Grant Morrison and Liam Sharp relaunching “The Green Lantern,” and G. Willow Wilson and Cary Nord taking over “Wonder Woman.”