DC Comics have announced that the 80th anniversary of Batman’s first appearance next year will be marked by the release of “Detective Comics” issue #1000 in March. The landmark 96-page issue will see the new creative team of writer Peter J. Tomasi and artist Doug Mahnke (who take over the title with December’s issue #994) joined by an all-star line-up of creators on back-up stories, including Geoff Johns, Brian Michael Bendis, Paul Dini, Christopher Priest, Dennis O’Neil, Neal Adams, Kelley Jones, Dustin Nguyen, Alex Maleev, and many more. It was revealed that “Detective” #1000 will introduce a new version of the Arkham Knight – the titular villain of Rocksteady Studios’ 2015 video game – into the mainstream DC Universe.

Like this year’s 80th anniversary celebrations for Superman, there will also be a hardcover collection, titled “Detective Comics: 80 Years of Batman – The Deluxe Edition.” As well as reprinting classic stories, including some non-Batman adventures like the first appearance from Martian Manhunter, the book will include several unpublished tales, such as a story set during Bruce Wayne’s childhood by writer Paul Levitz and artist Denys Cowan. The book will also have essays by Cory Doctorow, Neil Gaiman, Glen David Gold, Denny O’Neil, former San Diego police chief Shelley Zimmerman, and pulp historian Anthony Tollin, and never-before-seen layouts for “Detective Comics” #200 by Bob Kane’s “ghost” artist Lew Sayre Schwartz. Like “Detective Comics” #1000, “80 Years of Batman” will also be released in March. For more details, here’s the press release:

The Landmark Comic Book to Introduce New Version of the “Arkham Knight”;

BURBANK, CA – (November 15, 2018) – Leading into Batman’s big 80th celebration next year, DC announced today the World’s Greatest Detective will be honored with two milestone book releases in March 2019. DETECTIVE COMICS: 80 YEARS OF BATMAN THE DELUXE EDITION will be a spectacular oversize hardcover book, and DETECTIVE COMICS #1000 will be a collector’s edition of the 1,000th issue of the periodical comic that launched the high-flying adventures of the world’s most popular Super Hero. Retail orders for these books will be available soon.

Since his debut in DETECTIVE COMICS #27 in March 1939, Batman has been the most popular DC Super Hero in the world, resulting in repeated waves of pop culture “Bat-mania” for many generations. Whether known as the Dark Knight, the Caped Crusader or simply Batman, his appeal is global, and he has headlined comic books consistently since 1940, representing thousands of comics titles that have regularly been industry best-sellers no matter the comic book era.

“The enduring popularity of Batman over the past 80 years speaks to the character’s multi-generational appeal,” said DC Publishers Jim Lee and Dan DiDio. “We’re proud to celebrate Batman’s cultural impact with these special releases and look forward to a year of commemorating this milestone anniversary with fans across the globe.” 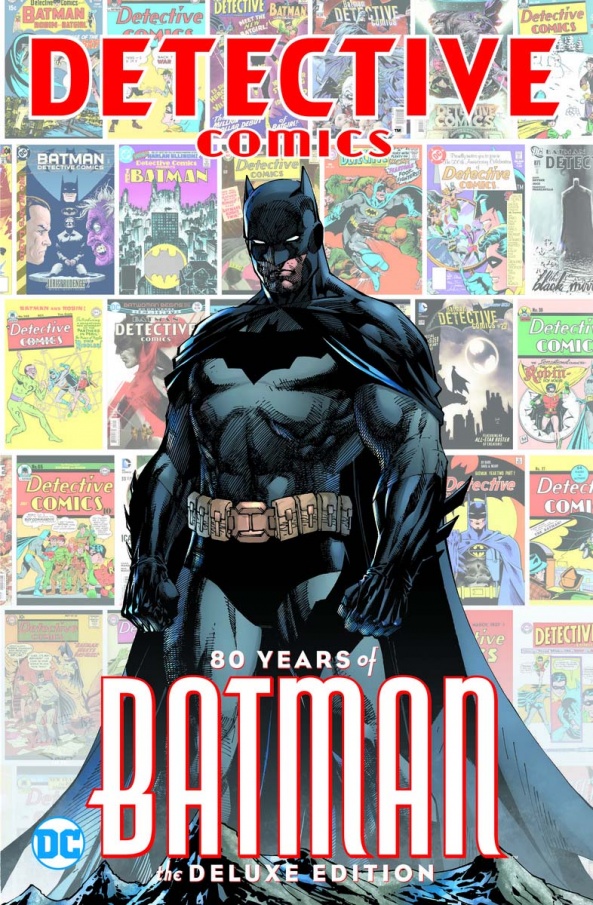 The collectible hardcover book follows the best-selling ACTION COMICS: 80 YEARS OF SUPERMAN and again features guest editor Paul Levitz. Classic reprints of the Dark Knight’s most memorable adventures will also be highlighted, from his first appearance to peak moments and the debuts of Robin, Batwoman, Bat-Mite, Batgirl and Super-Villains such as Two-Face, the Riddler, Clayface and Man-Bat. Plus, the must-have book will include the first tales of Slam Bradley, Air Wave, the Boy Commandos and the Martian Manhunter.

Marking eight decades of crime-fighting, the oversize 1,000th issue of DETECTIVE COMICS will reveal a never-before-seen iteration of the Arkham Knight, as well as original stories by some of the biggest names in comics. To further celebrate the cultural legacy of the iconic Super Hero, DC will present a special hardcover release, DETECTIVE COMICS: 80 YEARS OF BATMAN THE DELUXE EDITION, including new artwork, all-star contributors and thrilling untold stories.

These two special publishing exclusives, available in March 2019, are certain to become collector’s items as part of DC’s yearlong plans to honor 80years of Batman storytelling. More details on the cross-company festivities and global celebration will be released in the coming months. Visit www.dccomics.com or the DC YouTube channel for the latest news and updates.