As part of Disney+ Day 2021, Marvel Studios have announced (and in some cases confirmed) several animated and live-action projects, as part of a 14-minute special on the streaming service:

– Spider-Man: Freshman Year, an animated series that “follows Peter Parker on his way to becoming Spider-Man in the MCU, with a journey unlike we’ve ever seen and a style that celebrates the character’s early comic book roots.” It is being written by executive producer Jeff Trammel (Craig of the Creek, Amphibia, and Glitch Techs.)

– Marvel Zombies, an animated series following “a new generation of heroes [as they] battle against an ever-spreading zombie scourge,” scripted by current “Amazing Spider-Man” comic co-writer Zeb Wells, and directed by Bryan Andrews (a storyboard artist on many Marvel Studios films.)

– Echo, a Hawkeye spin-off starring Alaqua Cox as the deaf Native American heroine Maya Lopez. No creative team was announced for the series.

– The Moon Knight footage shows Oscar Isaac’s Marc Spector struggling with his mental health, and distant shots of his caped alter-ego in action; it also reveals Isaac’s version of the character is British. Another shot during the final montage shows May Calamawy (Ramy)’s character being pulled into a cave by a malevolent entity.

– The She-Hulk preview showed Tatiana Maslany as lawyer Jennifer Walters and in her large, green, computer-generated form (whose face was not shown.) It also features Mark Ruffalo’s Bruce Banner, still in his Professor Hulk form from Avengers: Endgame, performing medical tests on his cousin, and explaining how fear and anger triggers the transformation. They appear together finally in human form, in a ’70s-style commercial for her law firm, that also homages Banner’s catchphrase from the Bill Bixby TV show.

– The Ms. Marvel segment features Iman Vellani as Kamala Khan aka Ms. Marvel, Matt Lintz as her best friend Bruno Carrelli, and a mysterious quartet of villains causing trouble in New Jersey. The footage appears to confirm Kamala’s powers have been changed in the MCU, with her being seen walking through the air by generating violet forcefields.

Test footage of Samuel L. Jackson in the Secret Invasion series was also shown, displaying a much more haggard looking Nick Fury, with a long, gray beard, and no eyepatch. For more of what Marvel exhibited, click here. 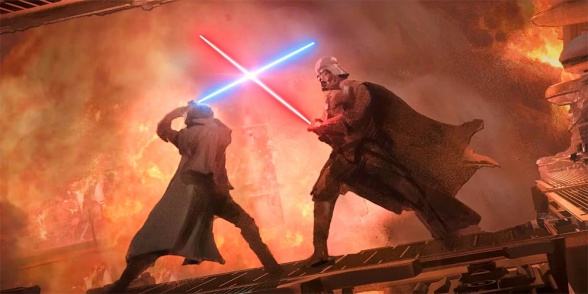 In non-Marvel Studios announcements, Lucasfilm released a brief one-minute featurette for the Obi-Wan Kenobi series on the service, featuring comments from executive producer Deborah Chow and actor Ewan McGregor, and concept art indicating Kenobi will be heading off Tatooine over the course of the story. Another duel with Hayden Christensen’s Darth Vader was heavily teased and shown in the artwork.

Meanwhile, Disney released a trailer for the Big Hero 6 spin-off series Baymax, coming Summer 2022, while Diary of a Wimpy Kid author Jeff Kinney revealed a second animated film, Diary of a Wimpy Kid: Rodrick Rules, will be released on the service next year. (The first will be released on December 3.) For more of Disney +’s announcements today, head to D23 (the official Disney fan club)’s coverage here.