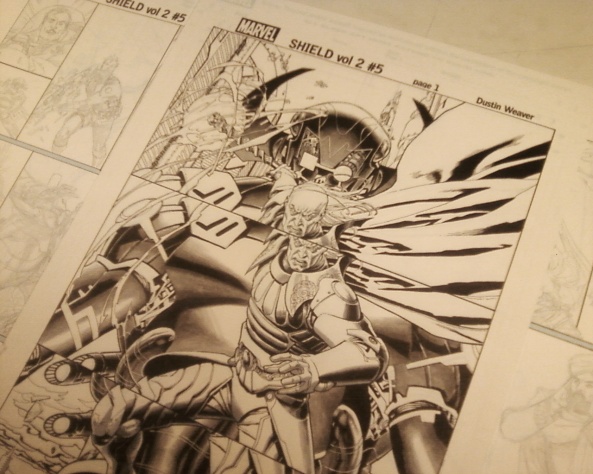 Remember that one comic, “Shield” by Jonathan Hickman and Dustin Weaver? Yeah? That was awesome…

But it has been missing for some time. In fact, it has been seven months since #4 of the second volume of the series has come out, and despite being one of the best things Hickman has done at Marvel (if not possibly the best, what with Dustin Weaver’s FANTASTIC Celestial-filled artwork) we’ve seen neither heads nor tails of it since. It has made us rather sad, and you too as well we assume.

Well, that’s what Dustin Weaver has taken to his blog to write about. As he writes on his blog, he will be offering daily updates on his blog until issues #5 and #6 are done and in our hands for our happy consumption. As Dustin explains,

Well, when I finished issue #4 there was no script for #5. Jonathan just hadn’t had a chance to get it done. Marvel has been keeping him real busy, and some of the comics he’s been writing are tied in with big Marvel events and need to be on time. S.H.I.E.L.D. is kind of its own thing. It’s not a big Marvel title and it’s not connected with any major Marvel Universe events. Getting the next issue of S.H.I.E.L.D. done just wasn’t as big a priority. It’s understandable. So the good editor folk at Marvel gave me some other work to do while Jonathan was able to catch up. They gave me a great Kieron Gillen Uncanny X-Men issue and the gig doing the covers for Astonishing X-Men. Not bad work. I couldn’t complain.

So then, Jonathan and I were off doing seporate things. S.H.I.E.L.D. was officially on a hiatus. Then I had to have my gallbladder removed, which killed my productivity for about a month. Meanwhile Jonathan was keeping super busy. So busy that when I did finally wrap up my Uncanny X-Men issue there was still not a full script for S.H.I.E.L.D. #5. Jonathan had only found the time to write the outline for the issue, so we decided to do it in the “Marvel Method .”

If you’re not familiar with what the “Marvel Method” is, I got this from Wikipedia: “The Marvel Method is a form of comic book writer-artist collaboration in which the artist works from a story synopsis, rather than a full script, creating page-by-page plot details on his or her own. The technique takes its name from its widespread use at Marvel Comics beginning in the 1960s, primarily under writer-editor Stan Lee and artists Jack Kirby, and Steve Ditko.” This method doesn’t seem to be used much anymore, but I gotta say that I’m loving it. I do try to inject as much of myself into the storytelling of EVERY comic that I do, but actually getting to create the pacing and find the beats is so much more rewarding. I’m not sure how many comics I’ll be doing this way in the future but I’m having a lot a fun on this one.

Dustin goes on further to note that he is juggling finishing this and doing Hickman’s relaunched “Avengers” series, so these final two issues won’t be happening fast — but they will happen. And when they do, we will be so happy.

Take a look at some of the art Dustin put on his blog to share with us the current progress, and keep your eye on Dustin’s blog for more daily updates. 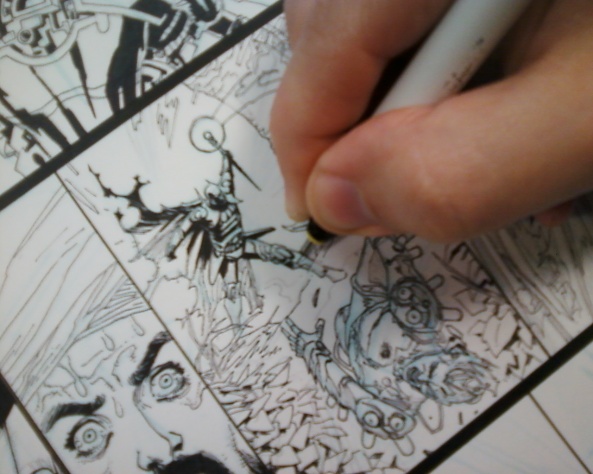 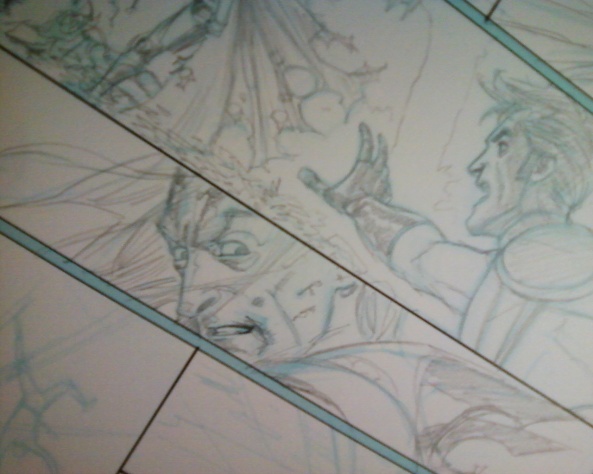