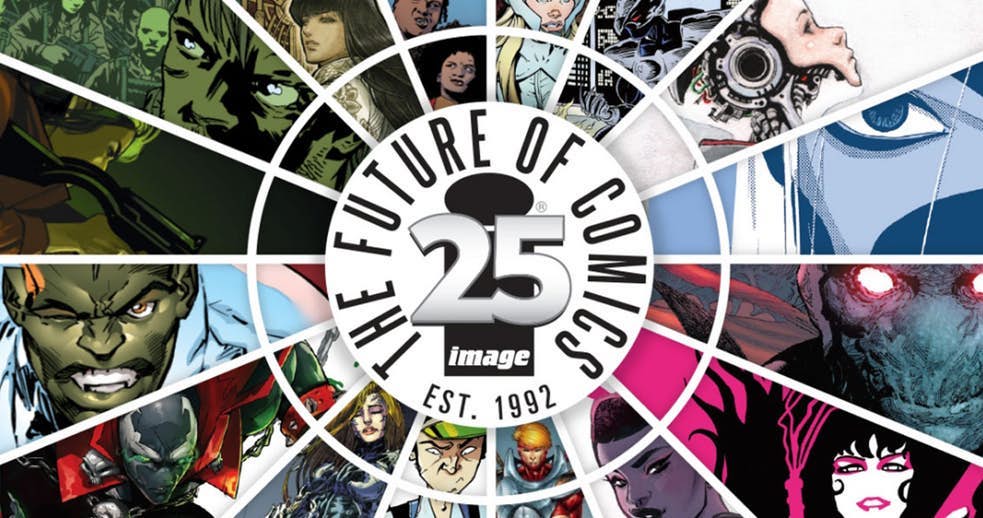 There is no Image Expo scheduled for this year, but that didn’t stop Image Comics from bringing an enormous slate of new titles to Emerald City Comicon yesterday afternoon. Image announced 15 new titles from a ton of familiar and seasoned creators as well as a few from some people new to the game. Below is a rundown of them all.

Described as “incomprehensible” by Casey and as being in the vein of early Image titles, this series promises not to take itself too seriously.

This series is a five-issue miniseries about “Nice Guy” who declares war on love, and promises cupid arrows and chainsaws. Look for it to drop in the fall.

A new ongoing series, set in a steampunk world, about a manmade floating city and the family of assassins that runs it. “God help me for making this type of comparison, but if you like Indiana Jones, or even Pirates of the Caribbean with a lot less Johnny Depp, that’s kind of what we’re going for here,” Jordan said.

A new food-inspired series (much needed with the recently concluded “Chew”) about a world in which culinary arts is the main industry. Culinary scientist Ali Bouzari is consulting on the series. This ongoing begins just in time for harvest!

“Sleepless” explores a knight, protecting a princess, who doesn’t sleep and the effects that has on their life. Sallah, who is both colorist and editor, said she cried when she read the first issue.

“Redlands” – written and colored by Jordie Bellaire, illustrated by Vanesa Del Rey, and lettered by Fonografiks

This is Bellaire’s first high-profile writing assignment as she has colored a number of celebrated series over the last few years including “The Vision.” “Redlands” takes place in a town called Redlands with “corrupt cops that are also witches.” This series is basically about everything Bellaire is currently pissed about. “If you like sex, if you like weirdness, if you like horror, if you’re upset about the way the government and criminal justice system works, give it a shot.”

The duo of LeHeup and Girner promised a lot of, well, shirtless bear fighting. “It’s very over the top, very bonkers, but very grounded,” LeHeup added to laughter from the crowd. Girner also explained, “There are a ton of influences — ’80s action flicks, kung-fu, Saturday morning cartoons, for sure, it’s very animated. It’s about a guy who had to deal with his past to save everybody.”

Neither Lemire or Hester could make it to the panel so this was announced via a video that had some technical difficulties, but eventually was able to work. Lemire described this as a horror comic, and spiritual follow-up to his work on “Sweet Tooth” and “Animal Man,” about a family on the run across backwoods America. This series is set to launch in November.

“The Hard Place” – written by Doug Wagner with art from Nick Rummel, and edited by Kevin Gardner

A five-issue “gritty crime” series with all five issues already penciled and inked, about a character fresh out of jail who gets caught up in a robbery. Gardner told the crowd that Rummel is “doing some storytelling stuff I haven’t even seen people attempt.”

“Generation Gone” – written by Ales Kot with art from André Lima Araújo, colored by Chris O’Halloran, and letter by Clayton Cowles with Tom Muller on design.

Out in July, this story centers on a couple in a toxic and harmful relationship who decide to rob a bank and then receive superpowers somehow very quickly following.

“The New World” – written by Ales Kot with art from Tradd Moore, colored by Jordie Bellaire and lettered by Clayton Cowles with Tom Muller designs

Set in “New California” following a second Civil War, this story sees the wall having been erected between California and Mexico, and a post-big earthquake LA also dubbed “New Los Angeles.” Not described the story as a Romeo/Juliet type love story. Kot said both his new series are two sides of the same coin, all about “love, fate and action.”

“Mage: The Hero Denied” – written and illustrated by Matt Wagner

This is the third part of Wagner’s Mage trilogy which he began “before most of the people who preceded me on this stage [were] born.” The 15-issue series, with a #0 issue out at SDCC and a double-sized finale, will be colored by Wagner’s son. The trilogy is a retelling of the Arthurian legend and also metaphorical of Wagner’s life. “You always hear every story’s already been told,” Wagner said. “That’s maybe true. But it hasn’t been told by you.” You can read an interview with Wagner at ECCC here.

A graphic novel set in the Irish town of Limerick about an Irish gangster named Jimmy Savage. Shalvey, and Irish creator himself, said the experience of writing this was “liberating.” “You can do whatever the fuck you want. Especially this, because I don’t know if anybody will be able to read this, because it’s all in Irish slang.” Look for this to drop in the fall and check out an interview about this new graphic novel.

A six-issue series beginning this summer with a 66 page first issue and subsequent 35 page installments, Janson said “We held absolutely nothing back.” “Sacred Creatures” takes place in a world where supernatural beings have inserted themselves into society and are now ready to take control. Janson and Raimondi are sharing writing and art duties with Raimondi illustrating the present day story and Janson showcasing the history of the world. This is Janson’s first creator-owned series. All issues will have three covers, one from Raimondi, one from Janson, and a third from contributors including Frank Miller, Sean Gordon Murphy and Bill Sienkiewicz. More info here.

A five-issue series beginning in July, “Moonstruck” is a romance story with werewolves. In comparison to “Lumberjanes” Ellis stated, “‘Lumberjanes’ energy is very bright, it’s like a 10,” Ellis said. “This is a little bit different. It’s like a 9.75. It’s very cute, it’s very gay.”

Those are all the new series! Image also announced Image Expo will indeed return in 2018, scheduled for February 1.

For more images, check out Bleeding Cool’s post about the panel.