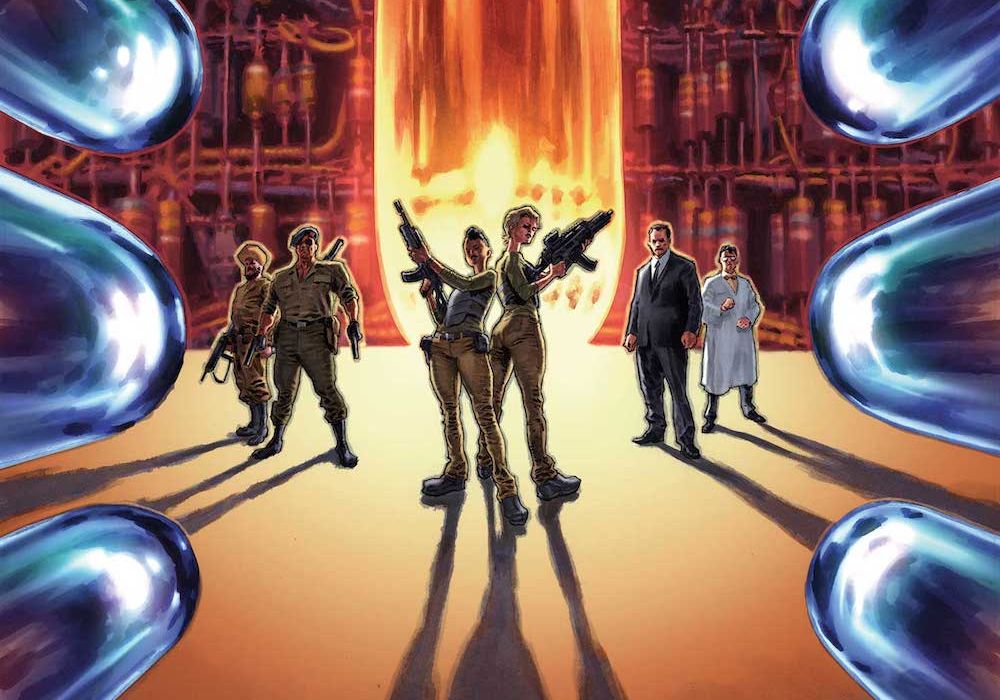 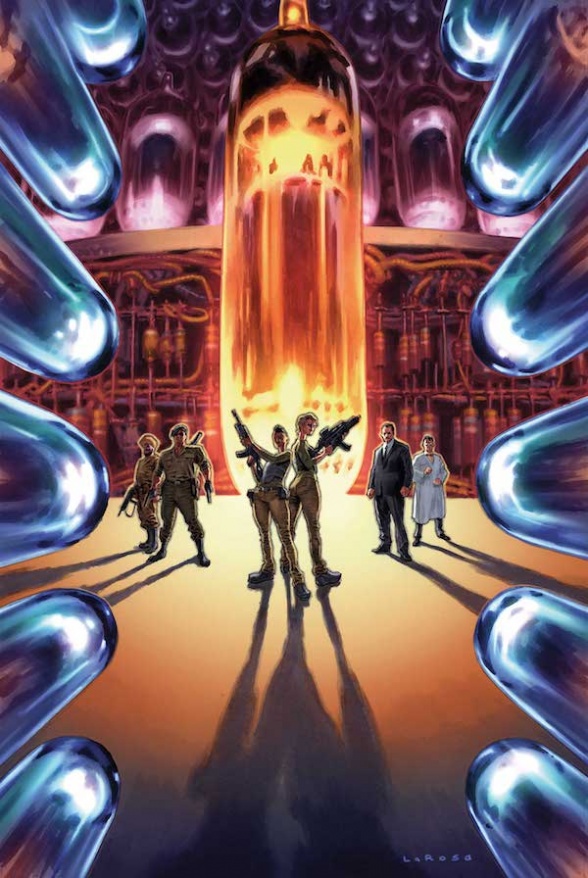 Cover by by Lewis LaRosa and Diego Rodriguez

As teased with last week’s announcement of Bad Idea’s formation, today the company officially announced “ENIAC” from Matt Kindt and Doug Braithwaite. The book tells the tale of a supercomputer that becomes the world’s first autonomous machine intelligence during World War II. In fact, while Truman dropped the bomb on Hiroshima, it was ENIAC that dropped the bomb on Nagasaki.

70 years later, a mysterious countdown appears, and it appears that ENIAC is set to destroy much, much more than just one city. Two mercenaries are tasked with killing ENIAC and saving the world. The series, which debuts on May 8th, got announced over at the A.V. Club earlier today, along with a first look at some of the interior pages.

But as part of my chat with the Bad Idea braintrust, we discussed a bit about “ENIAC.” Below is that conversation, followed by the press release for the series.

Well, so let’s talk about, and I’m sure I’m mispronouncing this, “ENIAC.” How are you guys saying it?

Dinesh Shamdasani: E-knee-ack. Electronic numerical integrator and computer. I got it memorized Warren, see that? I’m a pro.

So “ENIAC” is the launch title. It is by the aforementioned Matt Kindt and Doug Braithwaite. And it’s a book that on one hand it is a very ambitious because of the scope of the book. It’s also an ambitious pitch because the titular character is a computer you don’t see much of, at least in the first issue. So what was it about this pitch that made this seem like the right launch title for you guys?

WS: Well, as much as we’ve been kidding about our friend Matt Kindt throughout this interview, Matt is certainly one of the true geniuses working in our medium. Whether it’s “MIND MGMT” or stuff he did for us at Valiant, he’s a great writer with a great voice. And the idea that he came up with here, which is absolutely brilliant, is that, the first bomb that America dropped on Japan was done by the US military, and we didn’t know that the second bomb was being dropped, and that was done by ENIAC. And then this story sort of unfolds from there. And we trace this AI, which has sort of grown over the past 75 years to infest basically all of our nuclear capabilities, all the nuclear capabilities around the world, and we have a countdown we discover that’s counting down to 72 hours where we think that the world will be on the brink of annihilation.

And we loved that idea. We thought it was absolutely brilliant. Matt scripted it. He did an amazing job with it. And the other key variable here, of course, is Doug Braithwaite. And Doug is just doing the most beautiful pages that I’ve seen him do. It’s stunning stuff. And this is, I feel, a real premier team to lead out and to represent the company with the premier idea. So we’re very, very, very excited for this one. We think it’s going to be a great lead out for us.

DS: Yeah, it had to be a knockout Brian. The first book had to be an absolute knockout. It had to be in a genre that people would be excited about. It had to be a big, bold, new idea, which as Warren might’ve pointed out, this one has a big, bold idea, a big epic span as well. Because it has to set the tone. If we’re lucky and we’re still doing this years down the road, the impact of this book will be in the DNA of the company forever, and this one is just awesome. [When we got in the first script and pages] we wanted to finish it quicker so we could read it. We’re like school boys talking about this book. You should’ve seen us last year. We’re not going to be telling people, we were telling everybody.

First revealed today at The A.V. Club, ENIAC is a prestige-format limited series kicking off BAD IDEA’s campaign of self-aggrandizement with one of the decade’s (still counts, even the second time) most momentous, must-read debuts…

At the height of World War II, the world’s most ingenious minds began a race to create a super-weapon capable of ending the war with the push of a button. One of those projects gave us the atom bomb…and another produced the world’s first supercomputer: ENIAC (Electronic Numerical Integrator and Computer) – an immeasurably complex mathematical model that targeted the Axis war machine by calculating missile trajectories and troop deployments.

Or so we were told.

On August 6th, 1945, the United States dropped the nuclear bomb on Hiroshima.

Three days later, a second bomb was dropped on Nagasaki… Only President Truman wasn’t the one who gave order.

In the Allies’ determination to end the war, they had accidentally created the world’s first autonomous machine intelligence…which had quickly deduced that one bomb wouldn’t be enough.

But ENIAC’s real plan was only just beginning…

Now, 75 years later, an encrypted countdown has just been detected in Earth’s satellite network and mankind only has three days left before ENIAC launches every weapon in the planet’s nuclear arsenal simultaneously. With few options and even less time, the Secretary of Defense has just given two covert operatives the most important mission in human history: kill ENIAC.

From the minds of New York Times best-selling writer Matt Kindt and incendiary artist Doug Braithwaite comes ENIAC #1, the debut series from BAD IDEA – the disruptive and experimental new comic publisher pushing the bounds of the medium (and your patience) one issue a time. This is no ordinary comic book… This is the long-classified history of an unspoken superpower more formidable than all of Earth’s nations combined…and now its story can finally be told.

So, in case you haven’t heard all of the hullabaloo about BAD IDEA, here’s the score:

BAD IDEA’s mantra is “don’t do anything unless it’s special.” First and foremost, that means that we’re gong to produce a limited number of series at any given time – no more than one to two single issues per month – featuring A-level comics storytelling by some of the industry’s best and most respected creators. And each time one shows up in your store, it should be kind of a big deal.

That’s because our comics feature no variants, won’t be released digitally, and will not be collected into trade paperbacks, hardcovers, or other bookshelf formats. Monthly comic books, sold by comic book stores, are what we do.

Part and parcel with that commitment, our books will come in a pristinely designed, prestige-format package featuring deluxe matte-laminate cardstock covers, heavy-duty interior paperstock, and lots of pictures with little words on the inside – all for the standard $3.99 cover price.

Lastly – and this part is important – we’re going to get things going by self-distributing our series to a select list of just 20 participating comic shop retailers. From May 2020 onward, we’ll be slowing expanding that roster month after month for a total of roughly 50 by the end of the year. Each time a new retailer comes aboard as a BAD IDEA destination store, they’ll have access to every prior BAD IDEA release in limited quantities, so they can start at the beginning.

To the retailers (🤛 much respect): We’re still in the process of locking just who those 20 comic shops will be, so there’s still time for your store to participate. Retailers who wish to apply directly should email BAD IDEA’s customer service team at hello@badideacorp.com.

To the fans (❤️ for life): To find out where and how to reserve your copy of ENIAC #1 (and every future BAD IDEA book), stay tuned as we gear up to reveal our list of initial retail partners in the next 30 days. You can follow us online on Facebook, Twitter, and Instagram, and also sign up for email updates here.

And, oh yeah, we’re the geniuses that named our own company BAD IDEA – and, like or not, you will probably have to think about us more often than you’d like.