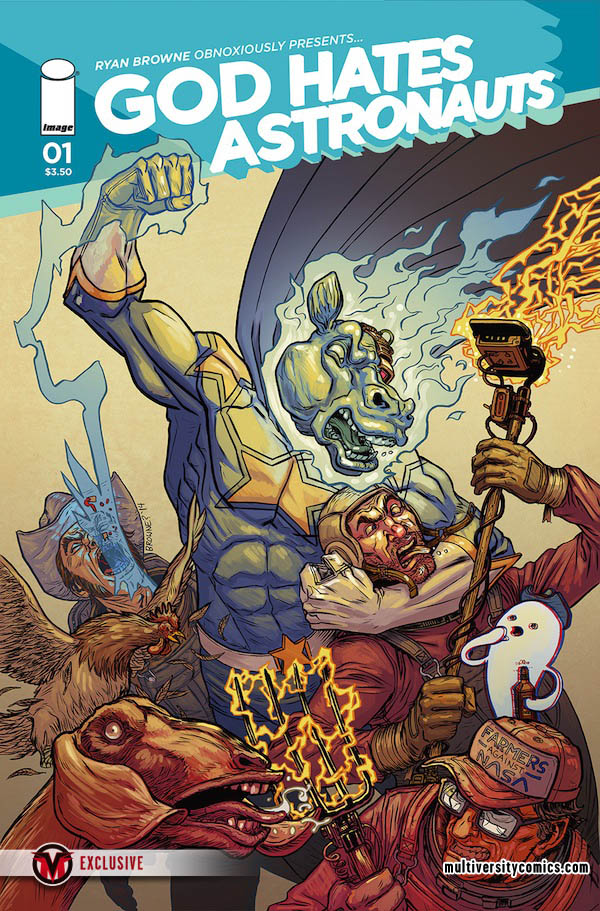 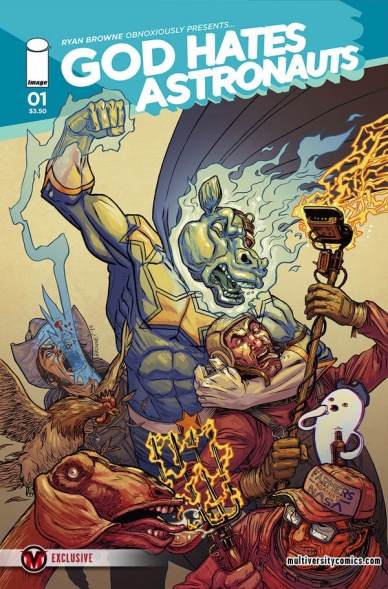 A NASA funded group of arrogant “super people” must stop a rash of farmers that have been using rocket-powered silos to launch themselves into outer space! As these Astro-Farmers fire themselves all over the galaxy, NASA must utilize their every resource (A guy with a ghost-cow head, a bunch of magic bears, and a Chicago cop with robot arms) to avoid an intergalactic incident!

We are very proud to announce the return of “God Hates Astronauts” from writer/artist Ryan Browne as a brand new, ongoing series from Image Comics! Starting this August, you can check out the monthly adventures of Star Fighter, The Impossible, Gnarled Winslow, and more every month at your favorite local comics shop. And, for those of you who aren’t familiar with the book, which started as a webcomic before being put out as a beautiful hardcover edition via Kickstarter, the original webcomic is still online for your reading enjoyment.

To celebrate this announcement, we sat down with Ryan to discuss a little about the book, and to announce a little fun contest for those of you at C2E2 this weekend, where Ryan will be selling black and white preview comics of “God Hates Astronauts.”

So, Ryan – why was now the right time to bring back “God Hates Astronauts?” And why does the monthly schedule appeal to you for this book?

Ryan Browne: It’s the right time because I feel confident enough as a writer to tackle this project. The original series was just a bunch of ideas for stupid jokes that I struggled to string together into a narrative. Now I’m actually planning things (what a novel idea!) and focusing on issues such as pacing, plot and character growth. Y’know, all that actually writer stuff.

As far as the ongoing schedule goes, it is extremely exciting for me to grow the GHA world without limits. I have a whole list of nutzo ideas that will come into play in the years to come. SO MUCH THINKING IT HURTS! Also after dealing with a monthly schedule on Bedlam and my Manhattan Projects fill-ins I’m finally at the place skill and speed wise to make it happen. 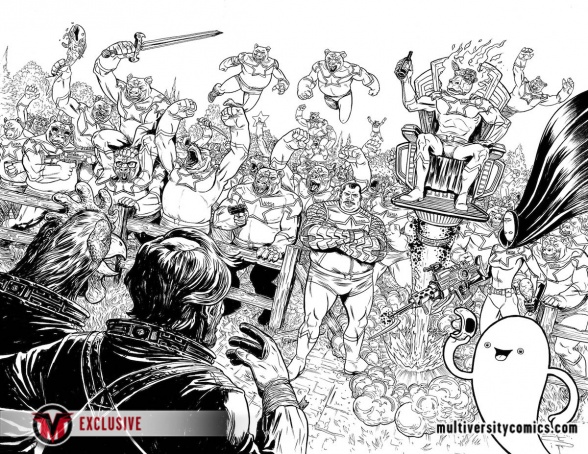 Story wise, how long after Vol. 1 does the story take place?

RB: It’s about a year and a half after the last book, which is basically real time since the hardcover collection came out. A lot has changed in that time.

How does the process change, for you, when doing a monthly book versus a webcomic? Do you find the pace to be more or less stressful than churning out daily/weekly content?

RB: It’s daunting but exciting. There’s so much room for jokes! Already I’m going pretty sound effect crazy with the first issue. It’s pretty funny not having an editor because I have no filter for my ideas to pass through. I’m basically doing whatever I want– which is what I did on the webcomic. It’s very different though because I’m actually plotting it out long term. With the webcomic, I was really working about two pages ahead with my thought process.

You’ve been doing a lot of Image work with other writers – your fourth issue of “The Manhattan Projects” comes out next month, and you recently wrapped an arc on “Bedlam” – what creative itch does that scratch that working on your own stuff doesn’t? Or is it simply a break from being inside your own mind for a little while? 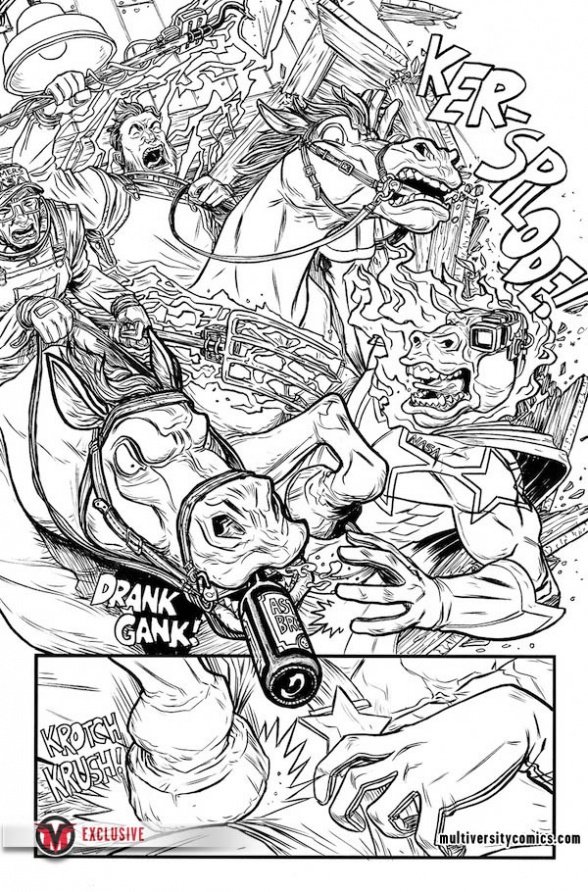 RB: There’s a lot less obsessing when someone else writes it. The thinking is intense trying to break down someone else’s script, but after that it can get pretty mindless. With writing my own stuff my brain never turns off– even when I’m not at the drawing table. Working with a good writer like Hickman or Spencer also provided me with a safety net and no matter how poorly I drew, I know their script would make it work. Now with GHA I’m out in the wild with just me, myself and my stupid jokes to survive.

“God Hates Astronauts” is one of the funniest and most absurd books that’ll be on shelves in 2014 – gives us the single craziest, most fucked up panel you’ve drawn for the series thus far?

RB: ONE OF?!!? How dare you! The book actually starts with a scene of farmer/chicken love. Not sure how that’s going to go over.

Issue #1 has a cover by Geof Darrow, which is incredibly awesome. Do you have other creators lined up for variant covers in the future? 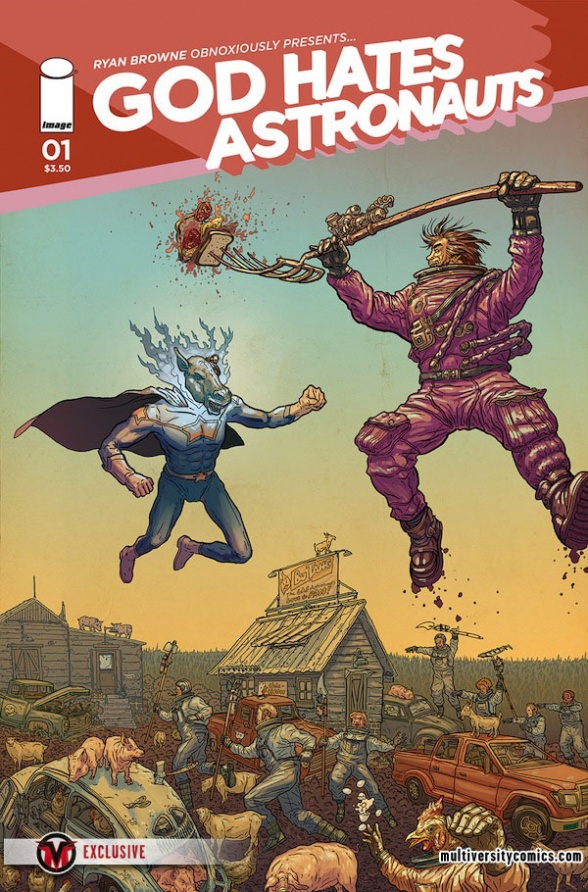 RB: Yeah. I have someone drawing a variant for the first five. The number will determine if it’s worth it to keep going after that. Jim Rugg is currently working on the issue two variant and I’m extremely freaking excited.

Finally, If you had to pitch someone to pick up #1 come August, how would you sell them on the book?

RB: Do you like jokes? And cosmic ghost cow heads? And star powered bears? And fat Chicago police officers with robot arms? And astronaut farmers who are madly in love with their chickens? If you answered yes to any of these questions then you need to bring “God Hates Astronauts” into your house and leave it unattended while you are at work. I guarantee that nearly all of your belongings will be in your house when you get home and that “God Hates Astronauts” is NOT a magical comic that I created in order to break into your home and steal your stuff. 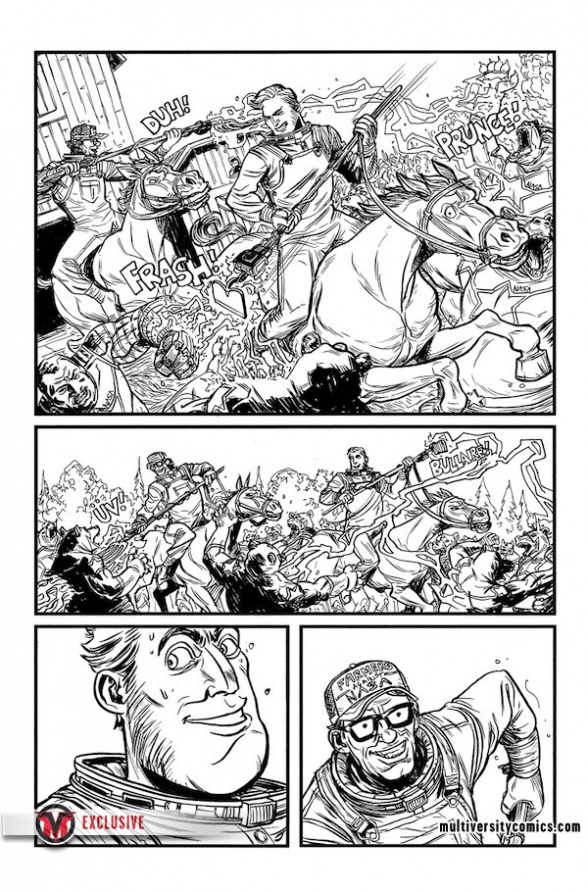 For those of you who will be at C2E2 this weekend, Ryan has sketched a cover on a preview book just for one special Multiversity reader. First of all, take a look at the sketched cover: 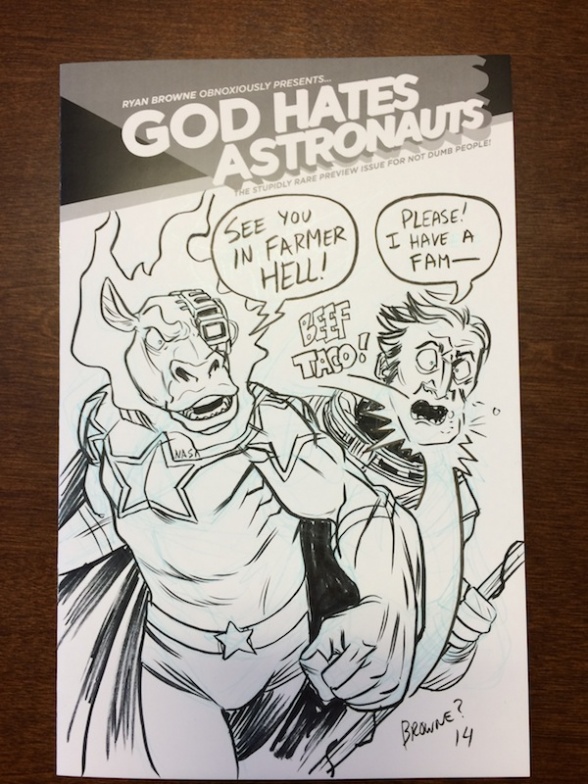 Now, I know what you must be thinking: who do I have to kill to get that sweet, sweet, beef taco’d cover? The good news is that nothing needs to die except your dignity! The first person to walk up to Ryan and say “I’ve been swimming in raw sewage, I love it!” gets the book absolutely free. So, what are you waiting for – if you’re in Chicago, get over to Ryan’s table (O5 in Artists Alley) and win that book! If you’re not there, make sure to pre-order “God Hates Astronauts” #1!