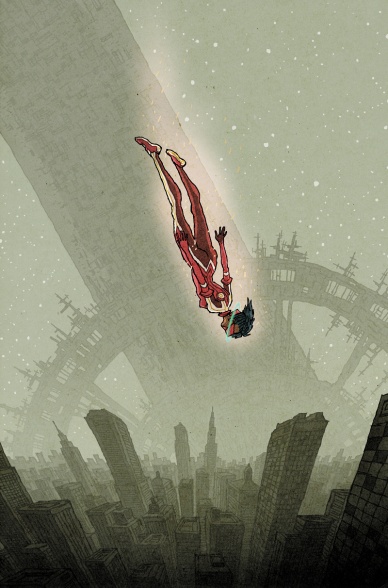 Cover to HaloGen #1 from Afu Chan

Boom! got some major ink from us in our 2014 in Review series, as we named them the second best publisher of the year, and a big reason why is taking shots on exciting new projects from talented new creators. Now, we have another reason to be excited, as they’ll be publishing “HaloGen” in March through their Archaia imprint, a brilliant sounding new sci-fi series from the team of Josh Tierney, Afu Chan and Giannis Milonogiannis.

Telling the story of Rell, a woman set to investigate the death of a god found floating in space by Cityship Q, this four issue mini-series finds three major parts of the “Spera” team delving into a sci-fi series of their own design. Here at Multiversity, we’re big fans of all three creators, particularly “Prophet” artist Milonogiannis. The man known for “Old City Blues” and an array of other projects is a hugely exciting creator, and while his work won’t be seen within these pages, he is one of its co-creators. And with covers from Chan, Milonogiannis and incoming “Hawkeye” artist Ramón K. Pérez, there’s a whole lot to be excited about when it comes to this book.

Take a look at the solicit below, and keep an eye on this as March approaches.

HaloGen #1 (of 4)
Publisher: Archaia, an imprint of BOOM! Studios
On Sale: March 2015
Author: Josh Tierney
Artist: Afu Chan
Cover Artists: A: Afu Chan B: Ramón K. Pérez (10 Years Cover) INCV C: Giannis Milonogiannis INCV
WHY WE LOVE IT: We’ve published four books thus far in Josh Tierney’s Spera series because we simply love his characters and storytelling. Now, he teams up with fellow webcomic creators Afu Chan (Spera) and Giannis Milonogiannis (Old City Blues, Prophet) for a new creator-owned, sci-fi adventure.
WHY YOU’LL LOVE IT: Having first collaborated on the Eisner Award-nominated Spera series, the creative team behind HaloGen is no stranger to kick-butt ladies, epic world-building, and sweeping adventures. This time they’re strapping on their sci-fi boots for a series perfect for fans of Prophet, Rocket Girl, and The Fifth Element.
WHAT IT’S ABOUT: There’s a rumor on Cityship Q that the gigantic body of a dead god was found floating in space. Rell, an agent working for the HaloGen organization, is tasked with finding the location of the god and retrieving it by any means necessary. Using her ability to form hyper-realistic holograms, Rell is about to take on the first mission she might not be able to finish. 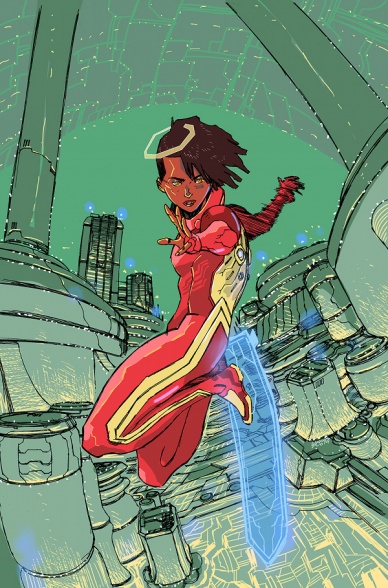 Cover to HaloGen #1 from Giannis Milonogiannis