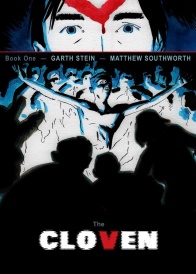 At The Hollywood Reporter, Fantagraphics Books have announced “The Cloven,” a graphic novel trilogy from novelist Garth Stein (The Art of Racing in the Rain) and artist Matthew Southworth (“Stumptown”). The books will tell the story of James “Tuck” Tucker, a part-man, part-goat who was created in a private lab in Washington. Tuck wants to live a normal life, but it’s easier said than done, and it becomes harder when he starts traveling through the Pacific Northwest in search of the Cloven, a mythical tribe of half human/half goat men.

The trilogy marks Stein’s first foray into comics writing, as well as Southworth’s first interior comics work in several years. “I can think of no better home for our series than Fantagraphics, a publisher with an impeccable reputation for quality stories and world-class artwork,” Stein said in a statement. “This is truly a match made in heaven. Or in Seattle. Any connection between ‘heaven’ and ‘Seattle’ is entirely your own…” Southworth said, “For years now I’ve been filling my bookshelves with more Fantagraphics Books than those of any other publisher. I’m thrilled that what has been my favorite creative experience making comics with Garth is going to have ‘Fantagraphics’ on the spine. Good things come to those who wait.”

Fantagraphics Associate Publisher Eric Reynolds said, “I’ve got a ton of respect and admiration for Garth and Matthew and am thrilled to have an opportunity to finally work with them — which was always my secret plan when I first introduced them! Seriously, though: theirs is a collaborative match made in heaven, in the service of a book that appeals on so many different levels: as a reflection of our paranoid media culture, as a loving ode to the Pacific Northwest, as a vibrant new twist on classic monster literature, or as a thoughtful meditation on just how sinister the disparity of wealth in America really is. It’s a rollicking, beautiful genre yarn as well as something readers will have a ball unpacking for years to come.”

“The Coven: Book One” will be released on July 14, 2020. You can check out interior artwork at the Reporter‘s press announcement.