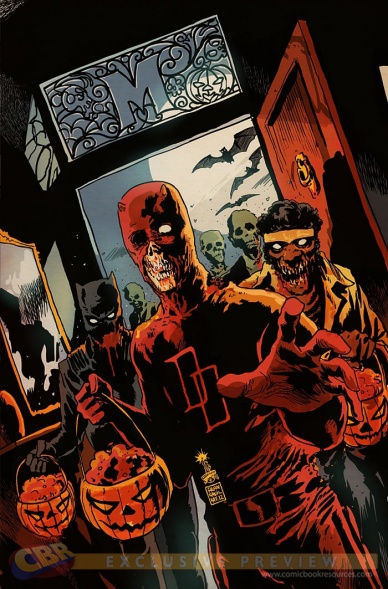 Because what better do superhero zombies have to do in October besides trick or treat?

Announced last week over at CBR’s Axel-In-Charge, it looks like Fred Van Lente will be returning the Marvel Zombieverse in October for “Marvel Zombies Halloween.” The series will be illustrated by Allessandro Vitti, will feature a Francesco Francavilla cover and is Van Lente’s fourth Zombieverse book, having previously written “Marvel Zombies” volumes three through five. It will only be one issue, though, as October will also be the debut of “Marvel Universe vs the Avengers,” another horror-themed comic, and we don’t want to overload on too many scary comics!

As Van Lente says in the interview,

So for our Halloween one-shot, we’re doing more of a “classic” zombie apocalypse story about a woman and her son. The kid has grown up in a zombie apocalypse universe and when Halloween rolls around, he wants to go trick or treating. He’s heard about it and read about it, but his mom doesn’t think it’s a very good idea because they’re surrounded by zombies.

So he asks her, “What’s the purpose of us staying alive during the zombie apocalypse if we never get to have any fun? What’s the point of just surviving?” He then sneaks out on Halloween night and goes Trick or Treating in a Spider-Man costume and events spiral from there. It’s a horrific but sweet little tale.

For the full interview with Van Lente about the upcoming series, head on over to CBR.