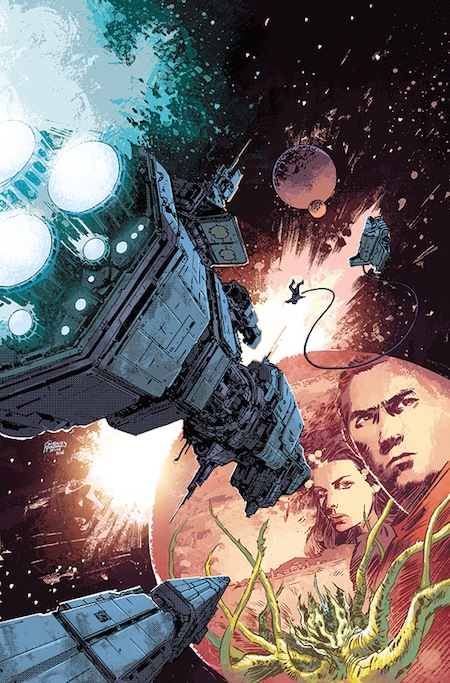 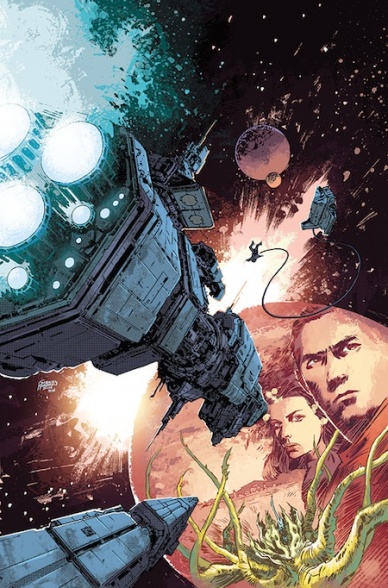 Just like in other walks of life, in comics, more often than not there are teams you can trust. One of those teams, the duo of Gabriel Hardman and Corinna Bechko, have put together a number of great books together, including but not limited to “Heathentown,” “The Crooked Man” and “Station to Station,” and this July they’re teaming once again for “Deep Gravity.”

Created in collaboration with Mike Richardson of Dark Horse, the book takes place on Gilise MG452 aka “Poseidon,” which is described as “Earth’s deadly sister planet.” On this planet, a company mines the planets resources that results in some dire consequences. Dark Horse will be releasing the book as a four-issue mini-series featuring crushing physics and imaginative aliens as only Hardman and Bechko can deliver.

The book launches this July. For the full press release from Dark Horse, please see below.

Dark Horse announces Deep Gravity, a new four-part miniseries from the minds of Mike Richardson and the creative team of Gabriel Hardman and Corinna Bechko (Star Wars: Legacy, Planet of the Apes).

Welcome to Poseidon! Gilise MG452, a.k.a. “Poseidon,” is Earth’s deadly sister planet.
A planet similar to ours, yet utterly alien, it circles a red dwarf just three years from Earth. Maelstrom Science and Technology Corp. has the lone contract to mine the planet’s resources. But what once was a scientific expedition has become a beast of profit . . . with no room for failure.

Deep Gravity will keep readers coming back for more!

“A solid debut for Hardman and Bechko. Hardman’s artwork is drool worthy.”—IGN

“Bechko and Hardman do a fantastic job creating this new story within the vast universe [of Star Wars] with an effective plot, good pacing, and smart reveals.”—Comic Booked

“You could not ask for a better team than the one we’ve got and I can’t wait to read what they do next.”—Unleash the Fanboy

About Dark Horse
Founded in 1986 by Mike Richardson, Dark Horse Comics has proven to be a solid example of how integrity and innovation can help broaden a unique storytelling medium and establish a small, homegrown company as an industry giant. The company is known for the progressive and creator-friendly atmosphere it provides for writers and artists. In addition to publishing comics from top talent, such as Frank Miller, Mike Mignola, Neil Gaiman, Brian Wood, Gerard Way, Felicia Day, and Guillermo del Toro, and comics legends, such as Will Eisner, Neal Adams, and Jim Steranko, Dark Horse has developed its own successful properties, such as The Mask, Ghost, Timecop, and SpyBoy. Its successful line of comics and products based on popular properties includes Star Wars, Mass Effect, Buffy the Vampire Slayer, Aliens, Conan, EVE Online, Halo, Serenity, Game of Thrones, and Domo. Today Dark Horse Comics is the largest independent comic book publisher in the US and is recognized as one of the world’s leading publishers of both creator-owned content and licensed comics material.