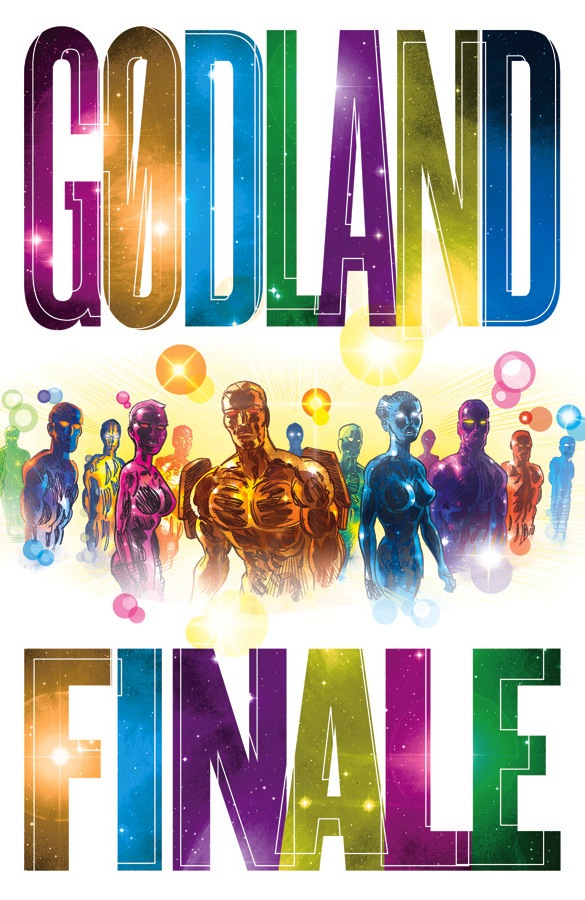 We’re ridiculously big fans of Joe Casey, Tom Scioli and their collaborative efforts in Gødland, a book we’ve openly praised on the site before. But if you’re like us, you’re probably also antsy for the finale to Gødland, a book that originally began in 2005 that has seen multiple unfortunate delays.

Well, I have good news today, my friends. 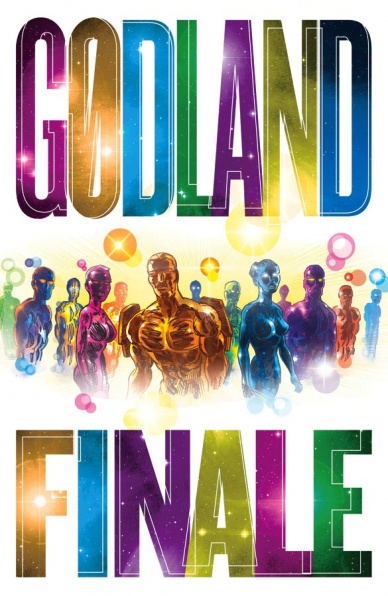 Arriving in stores on November 27th, the Gødland finale will be 72-pages long and will take everything into consideration — the origins of the series, the passage of time between this issue and the previous one (jumping 100 years into the future) and bringing to a close every epic storyline this epic book ever had epically during its rather epic duration.

I imagine that if you are like me, this is your reaction right about now:

Now is the time to get caught up if you haven’t already, I reckon?

For the full press release from Image Comics, please see below. To bolster additional excitement for the finale of the book, be sure to check out our previous interview with Tom Scioli about all things comics, including the finale.

GØDLAND, the long-running Image Comics series that launched in 2005, comes to its long-awaited end in the GØDLAND FINALE, a 72-page one-shot to be released in November. Man of Action Studios’ Joe Casey (SEX, THE BOUNCE) and artist Tom Scioli have created an epilogue story that takes the cosmic grandeur of the Eisner-nominated series to incredible new heights. It’s been more than a year since the last issue, #36, was released, but Casey and Scioli will address the passage of time in a much more dramatic way.

“In the FINALE, we jump one hundred years ahead into the future,” said Casey, “and show a world significantly transformed by Adam Archer’s ‘GØD-like’ actions as seen in issue #36. But, once again, humanity is teetering on another major evolutionary brink… and what ultimately occurs in the final pages is the true culmination of everything this book has been about from the very first issue.”

For both Casey and Scioli, this issue is much more than simply bringing the story to its mind-bending conclusion. It’s about carrying on the tradition of experimentation that has been a hallmark of the series since its debut.

“In some ways, this is an attempt to take comics to another level, rethinking the ways that a story can be delivered in comic book form,” said Casey. “We’ve got one last shot to make a glorious, significant artistic statement here, and we’re going for it in a big way! There’ll be new characters, new conflicts and new cosmic enlightenment — all in a single issue!”

Tom Scioli added, “GØDLAND #36 and the FINALE are our Hunger Dogs, our Mister Miracle #18, our Silver Star #6. I feel genuinely privileged that we were able to end the comic properly, something very few series get to do.”

With the FINALE finally set for release, Casey and Scioli are feeling the weight of bringing to a close a series that has been part of their lives for the last eight years. Reminiscing on the overall experience comes with the territory.

“With GØDLAND I learned that you can be funny and still be serious,” said Scioli. “For as bloated and excessive a prog rock comic GØDLAND is, I learned how to tell a story economically from it. We cover a lot of ground in those 37 issues. I had to draw seven different versions of the future, which is the biggest challenge I’ve ever faced in comics. I didn’t know I had that many in me. Most cartoonists only have one or two in them.”

On their creative collaboration, Casey said, “Tom can draw everything, and more importantly, he doesn’t shy away from drawing anything. If you’re gonna do a bona fide cosmic superhero epic, he’s the guy you want drawing it. And there are sections of the FINALE that are as jaw-dropping as anything you’ve ever seen in a comic book before…!”

On working on the book, Scioli added, “I learned that there’s more to life than Jack Kirby. Joe brought his influences to the project and I sought them out to see for myself. Cosmic jokesters like Starlin, Gerber and Englehart, among others. These creators have since become favorites of mine. Most of all, I learned how to collaborate. I couldn’t ask for a better creative partner than Joe Casey. What we created together is very special to me. I’m eternally grateful to the people who supported us and our book.”

The GØDLAND FINALE will be in stores on November 27 and can be pre-ordered in the September issue of Previews.
ABOUT IMAGE COMICS
Image Comics is a comic book and graphic novel publisher founded in 1992 by a collective of best-selling artists. Image has since gone on to become one of the largest comics publishers in the United States. Image currently has five partners: Robert Kirkman, Erik Larsen, Todd McFarlane, Marc Silvestri and Jim Valentino. It consists of five major houses: Todd McFarlane Productions, Top Cow Productions, Shadowline, Skybound and Image Central. Image publishes comics and graphic novels in nearly every genre, sub-genre, and style imaginable. It offers science fiction, fantasy, romance, horror, crime fiction, historical fiction, humor and more by the finest artists and writers working in the medium today. For more information, visit www.imagecomics.com.

ABOUT MAN OF ACTION STUDIOS
Man of Action Studios, the bi-coastal entertainment company started in 2000, created the megahit Ben 10, a three billion dollar boys’ action empire that has been called the most successful superhero launch of the past decade. Man of Action Studios consists of creators and acclaimed comic book writers Joe Casey, Joe Kelly, Duncan Rouleau and Steven T. Seagle. The quartet collectively worked on the largest franchise characters in comics from Superman to X-Men before refocusing on creating worlds/characters for their own original comic books and graphic novels published through their Man of Action imprint at Image Comics. They also created cult favorite series Generator Rex for Cartoon Network, are executive producers on the international series Gormiti, Sam-Zag’s The 7Cs, Spinmaster’s Bakugan franchise, and Nickelodeon’s Monsuno and they are co-executive producers and writers for Marvel’s Avengers Assemble and Ultimate Spider-Man on Disney XD. Upcoming films based upon Man of Action creations include New Line’s The Great Unknown, Officer Downe and Big Hero 6, announced as Disney’s first animated feature based on a Marvel property featuring the team of characters created by Man of Action. Follow them at their not-so-secret headquarters on the Web at http://www.ManOfAction.TV. Facebook:http://www.Facebook.com/ManOfActionStudios Twitter: http://www.Twitter.com/ManOfActionNow