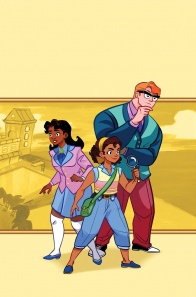 Kerry Washington and Rashida Jones are teaming up for a film adaptation of Hope Larson and Brittney Williams’s “Goldie Vance.” The Boom! Studios series, which was published in twelve issues from April 2016 to May 2017, follows 16-year-old Marigold “Goldie” Vance, who lives at a Florida resort with her dad, the manager. She dreams of becoming the hotel’s in-house detective when one day, Walter, the current detective, encounters a case he can’t solve, and agrees to mentor her in exchange for help.

The film will be directed by Jones, and is being produced by Washington’s Simpson Street production company in conjunction with 20th Century Fox (which BOOM! Studios has a first-look deal with). Washington told The Hollywood Reporter, “I’m ecstatic to be collaborating with Rashida and BOOM! Studios on telling this story. Fox is the perfect home for this project. Goldie Vance will steal your heart. She’s already stolen mine!” Jones added, “Goldie is exactly the kind of fearless, curious and funny heroine we need right now. I’m so honored to partner with Kerry Washington, BOOM! Studios and Fox to bring her world to life.”

Fox are hoping the comic can become a new film franchise. The film will mark Jones’s feature film directorial debut, though she directed the music video for Sara Bareilles’ “Brave,” and co-wrote Celeste and Jesse Forever and the upcoming Toy Story 4 with Will McCormack. Larson is currently writing DC’s “Batgirl,” while Williams is working as a Saturday Morning Cartoonist for Autostraddle.