In a press release, Albatross Funnybooks have announced they will publish a new “The Goon” series to mark the 20th anniversary of the comic in 2019. For the first time, creator Eric Powell will collaborate with other writers and pencilers on the adventures of the titular zombie-fighting gangster and his sidekick Franky. Powell states, “You’ll not only be getting ‘Goon’ books written and drawn by me, but some written and drawn by some of the best talent in the industry!” Here’s the press release: 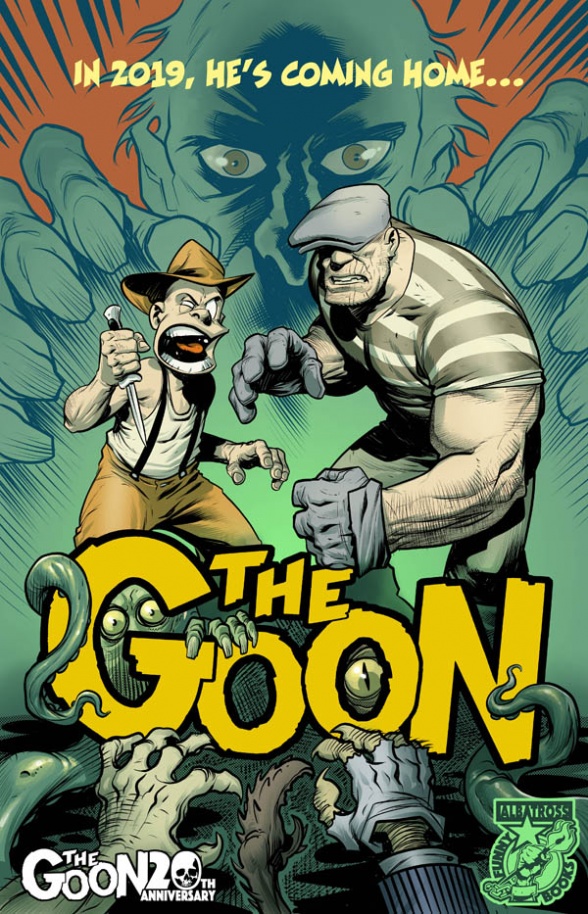 (October 9, 2018) In 2019, award-winning cartoonist Eric Powell and his publishing company Albatross Funnybooks will debut an all new GOON comic book series, featuring never-before-published stories. For almost two decades, the Goon’s whiskey fueled adventures have thrilled fans, critics, and creators with their bold creativity, classic style,and irreverent humor. When Albatross Funnybooks debuts THE GOON #1 next spring, it will mark the first new Goon stories to be published since Dark Horse published THE GOON: ONCE UPON A HARD TIME comics in 2015, and it will kick off a year-long, 20th anniversary celebration featuring a national signing tour, Albatross Funnybooks’ collected editions of classic GOON graphic novels, limited edition GOON tiki mugs and more.

“The fact that we feel confident bringing the full library of my flagship title over to Albatross going into our third year of expansion fills me with excitement and a new enthusiastic energy for what’s to come,” said Powell. “With Albatross, we focus on making fun, eclectic comics that stand out for their individuality and creative quality, as seen in our lineup of titles like HILLBILLY, SPOOK HOUSE, ‘NAMWOLF, GALAKTKON, GRUMBLE and MEGAGHOST. It’s with this idea of keeping the fun in our Funny Books that we are steering this new GOON series. I’m returning to the roots of the series with a heavy emphasis on the weird, twisted humor the book has been known for. The world around us is dark enough right now. I want to make readers laugh and forget their troubles for a little bit. It definitely feels like it’s time for THE GOON.”

For this new run of stories, Powell will be joined on Albatross Funnybooks’ THE GOON by several acclaimed creators.

“Since I am now not just the creator of THE GOON but also the publisher, I need to make sure our readers get their GOON fix on a regular basis. To that end, we’ll be bringing new creators on to the regular series for first time ever,” teased Powell. “You’ll not only be getting GOON books written and drawn by me, but some written and drawn by some of the best talent in the industry! We will be making announcements in the months to come, but, boy, I can’t wait to show off some of the art we have in the works!!! I think this artist might draw Goon and Franky better than me! And just wait until you hear who’s writing a script for me to draw! It’s one of the best daggum creators in the business, ya’ll!”