In a press release, Z2 Comics have announced artist Gary Dumm (“American Splendor”)’s new graphic novel “Tales of the Music Makers” will contain two posthumous stories written by Harvey Pekar. The book, which will be released on February 12, is a musical anthology created to mark the 25th anniversary of the Music Maker Relief Foundation: Pekar’s two stories, which explores the lives of blues pioneers Preston Fulp and Willa Mae Buckner, were written in 2003. For more on the book, here’s the full press release after the jump: 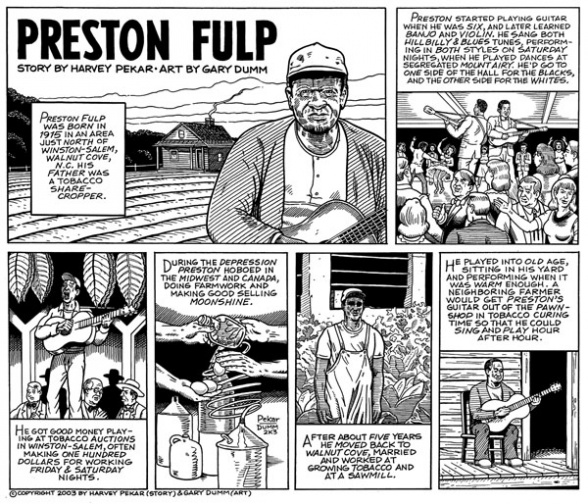 (January 3, 2019) On February 12, 2019, Z2 Comics will release Tales of the Music Makers, an original graphic novel that showcases the stories of Southern musicians — including the Carolina Chocolate Drops, Taj Mahal and the Como Mamas — and explores the origins and mission of the Music Maker Relief Foundation — a non-profit organization dedicated to helping the true pioneers and forgotten heroes of Southern music gain recognition and meet their day-to-day needs. The Tales of the Music Makers features a downloadable soundtrack, with music recorded by the Music Maker Foundation; an extensive black and white photography archive spanning Music Maker’s 25 years; stories written and drawn by Gary Dumm; and two never-before-published stories written by Harvey Pekar, the legendary creator of American Splendor and a jazz and blues aficionado. Tales of the Music Makers will be released by Z2 Comics as part of the 25th anniversary celebration of the non profit organization, and all profits from the book will go to the creators and The Music Maker Relief Foundation.

Tales of the Music Makers tells the stories of:

The book notably includes two stories that Harvey Pekar wrote in 2003. They will be the first Pekar-written stories to be published since December 2010 when Marvel Comics published the last story he wrote, “Harvey Pekar Meets the Thing”, following the writer’s death earlier that year.

Music Maker founder, Tim Duffy explains how Pekar became involved in the project, following a conversation two decades ago. “I got a call from Harvey in 1998 because he was writing a story in the Cleveland Plain Dealer about a tour we were on with Music Maker artists called the Winston Blues Revival,” said Duffy. “The interview went great and when the tour hit Cleveland I got to meet Harvey, we hung out and went to the Cleveland Art Museum and became good friends. Soon after, I asked him if he would write a comic for Music Maker since I had long been a fan. Harvey was a huge music head and loved Music Maker’s mission and would often clue me in on obscure musicians that he knew. His basement was full of tens of thousands of records and CDs – he loved music. Harvey was a huge fan of the underdog and the working class so creating the comics for Music Maker made a perfect sense to him. In a single page Harvey could capture the essence and complexity of these musician’s lives and he understood them because he loved the working class and was working class himself. To me, Harvey was the absolute greatest of underground comic storytellers of his generation – for his last comics to be about Music Maker artists Preston Fulp and Willa Mae Buckner still blows my mind to this day.”

“Harvey Pekar’s Cleveland was the first book we ever published,” said Z2 Comics Co-Publisher Josh Frankel.” It’s both an honor and pleasure to be coming full circle with Tales of The Music Makers. The majority of the book is by the ever talented Gary Dumm, but it’s a thrill to have these new stories by Harvey. especially as they are part of an ambitious project dedicated to educating people about the legacy of Southern musicians and the mission of the Music Maker Foundation.”

The Tales of the Music Makers Soundtrack is included with the graphic novel, as a download, featuring:

3. Algia Mae Hinton – When You Kill the Chicken, Save Me The Head

4. Ben Payton – Singing About My Baby

7. The Como Mamas – Thank Him Enough

13. Drink Small and Cootie Stark – Come Out of the Wilderness

14. Essie Mae Brooks – I Got So Much To Talk About

The Music Maker Relief Foundation provides resources to elderly, southern musicians living in poverty and keeps southern, musical culture alive by recording albums, arranging concerts and museum exhibitions, and publishing books. Music Maker presents these musical traditions to the world so American culture will flourish and be preserved for future generations. For more information, follow Music Maker Foundation on Twitter and Facebook. For more updates on the book, follow Z2 Comics on Twitter and Facebook.