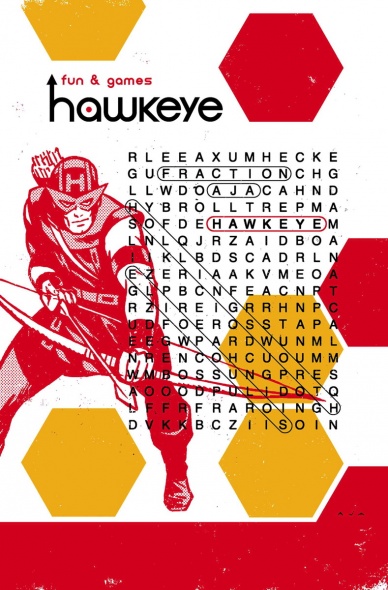 It has come to our attention, via a report from DCBS (through which I personally pre-order all my books) that upcoming issues of “Hawkeye” will be released out of order. It appears to have been initially reported by some sites a few days ago, but today we have confirmation as to “what happened.” At least, from one side of the story.

It’s not unusual for books to come out of order, truthfully. Marvel has done it in the past, releasing “Wolverine” #310 before #309 (because, so they said, they were just so excited for you to see the Loeb/Bianchi sequel). So this isn’t really shocking. “Editorial circumstance” is certainly an interesting choice of words, but it’s probably innocuous.

So, just keep that in mind — your Hawkguys are going to come, and they’ll be a bit late and out of order.

Here are the solicits for the upcoming issues:

• The brothers Barton double down against the bad guys as the Clown lays siege to their building. Can Hawkguy keep everyone safe against a killer nobody’s even seen yet?
• What happens when you’re locked up with your loser big brother for like a week straight?
• You go nuts, right? Clint goes a little nuts.
• Plus…two free staples!

HAWKEYE #16
MATT FRACTION (W) • ANNIE WU (A)
Cover BY DAVID AJA
• The adventures of Lady Hawkguy out west continue as Kate helps a reclusive and Sixties-damaged pop music genius find his lost masterpiece.
• Madame Masque, meanwhile, finds HER. By which we mean starts trying to kill her again.
• Also the cat needs cat food and there’s none to be found. What’s THAT about?
• Hey not for nothin’ but you guys gotta try these Cronuts!

I guess they just couldn’t wait to show you that Cronuts sequence.