“This strangest chapter of Hellboy’s life was first mentioned in 2008’s Hellboy Companion as sort of a joke,” recalls Scott Allie. “But in the years since then, Mike has worked with some of his favorite artists to unearth the details of Hellboy’s half-year lost weekend in Mexico, including vampire-slaying luchadores, a tequila-fueled wedding ceremony, and haunting images of poultry.”

These other stories Allie mentions are the ones Hellboy doesn’t remember. They include some of the strangest stories Mike Mignola has ever written, and in April, 2016, these stories will finally be collected together in a single strange volume.

Since one of the “Hellboy in Mexico” stories introduced the Frankenstein Creature, I think this collection will make an excellent companion for the “Frankenstein Underground” collection coming out in November. 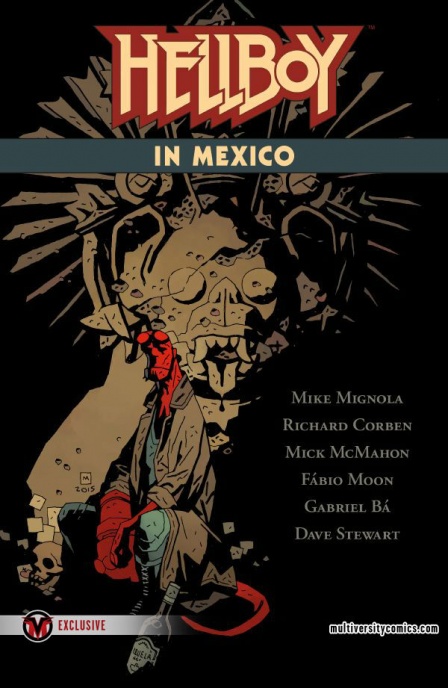 In 1956, Hellboy caravans across Mexico—vampire-hunting with luchadores, finding the Aztec Gods, fighting evil turkeys and Frankenstein’s monster, and drinking way too much tequila, in the strangest collection of his adventures yet.

Collects Hellboy in Mexico, the original graphic novel Hellboy: House of the Living Dead, “The Coffin Man” from the Hellboy 20th Anniversary Sampler, and “Hellboy versus the Aztec Mummy,” “Hellboy Gets Married,” and “The Coffin Man 2: The Rematch” from Dark Horse Presents.