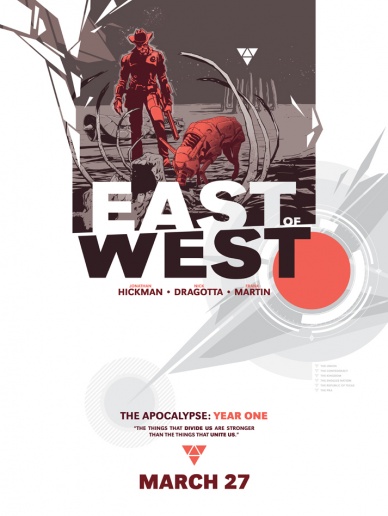 Ever since its initial announcement, “East of West” has been one of our most highly anticipated series of 2013. Re-teaming Nick Dragotta and Jonathan Hickman, this post-apocalyptic sci-fi western has all the makings for 2013’s Book of the Year – and we (I) haven’t been shy about saying so.

Of course, the anticipation only builds further with the release of the first issue cover, a new press release and the very very cool detail that Frank Martin is on colors, whose great work you can currently see in “Avengers Arena.” If you like the way that book looks, I’d wager a guess you might like this one too.

For the cover to the first issue and the full press release from Image Comics, please see below. 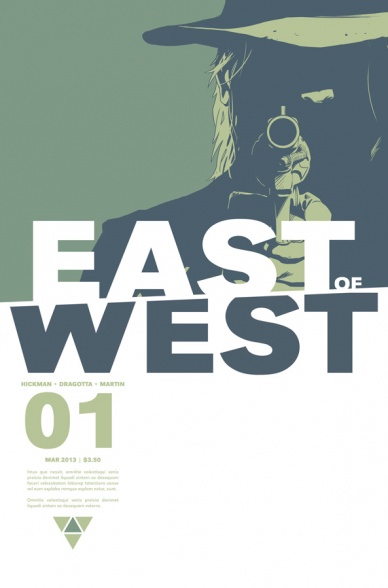 The world is ending. Humanity’s final judgment is at hand, and the only hope for us is in the harbingers of our destruction: The Four Horsemen of the Apocalypse.

This March, the new Image Comics series EAST OF WEST, a dystopian western by Jonathan Hickman and Nick Dragotta, will cast readers into broken future where the world’s most powerful men and women are working together to manufacture the end of the Earth.

“East of West is a story about that feeling we’re experiencing collectively right now, as a society, that the world is in a bit of a spiral,” said Hickman in an interview at Previews World. “You know, the end times are imminent and we all hate each other too much to come together and solve our problems…. And then, in the face of all that despair and gloom, somehow there is still hope. That’s East of West.”

The Four Horseman aren’t exactly Biblical — Hickman describes them as “scary adolescents,” and their goal is to take a series of actions that will eventually domino into apocalypse. In the face of this, the question of who will stand against them is one of the many mysteries and shocking revelations of EAST OF WEST.

Hickman’s collaborator, artist Dragotta, whom Hickman calls “Probably the most expressive artist I’ve had the pleasure of working with,” has also worked with him on Marvel’s Fantastic Four and FF. His intricate pages capture dusty wastelands and cramped cityscapes, as well as the varied inhabitants of EAST OF WEST’s apocalyptic world.