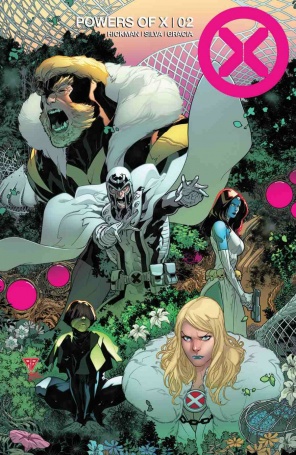 In a new interview at ComicBook.com, writer Jonathan Hickman shared additional details on his upcoming “X-Men” run (which was announced at this year’s C2E2). The biggest news coming out of the interview was that Hickman’s two initial miniseries, “House of X” and “Powers of X,” will be the only X-titles running from July to September of this year. Additionally, post-September’s X-landscape will be announced in July, around the time of San Diego Comic Con.

“I didn’t feel like just doing a new number one was enough. I also didn’t think that if we were serious about what we were trying to do we should have a mixed message in the market about what an X-book is,” said Hickman, over at ComicBook.com. “So I argued for cancelling the entire line: Why it would work, why it was a good idea, and most importantly, why it was what we needed to do narratively to return the X-Men to their rightful prominent position in the Marvel Universe.”

According to Hickman, “House of X” and “Powers of X” will combine to tell one twelve-issue story, with each series expanding on ideas and revelations initially presented in the other. Then, after those two miniseries finish their run, Hickman and a number of other creators will be “launching an entire new universe of X-books.”

“Some will be traditional fare, some carry through on ideas presented in ‘HOX’ and ‘POX.’ Some books are completely new concepts,” said Hickman. “I, personally, will be writing the ongoing flagship X-book.”

Hickman describes the first set of post-“HOX” and “POX” X-titles as “Wave 1” of his new “X-Men” universe, with “Wave 2” of his longform story debuting in 2020. For more from Hickman, and to see the covers to issue #2 and #3 of “House of X” and “Powers of X,” be sure to click over to ComicBook.com.