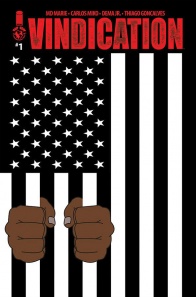 Image Comics/Top Cow Productions has announced a brand new mini-series entitled “Vindication.” Written by MD Marie (The Saints of Winter Valley) and illustrated by Carlos Miko and Dema Jr., “Vindication” will center around Detective Chip Christopher as he treads the blurry line between racism and due diligence as a police officer in a time where police are often portrayed as the enemy. Currently, he is investigating Turn, a young black man who has previously been exonerated of a similar murder case. The series will explore the United States justice system, as well as themes of race and police brutality.

In addition to having written The Saints of Winter Valley, a steampunk story about four female bounty hunters and their weapons inventor hunting an evil warlord, MD Marie is an accomplished cosplayer and model. “Vindication” will be the first published comic series from Marie, Miko, and Dema Jr. You can see Marie’s Facebook profile here.

“Vindication” #1 will be available for purchase on Wednesday, January 16th, 2019. The final order cutoff deadline for comics retailers is Monday, December 17th. Until then, head on over to Image for a preview of the first issue.

In turbulent times, when cops are often portrayed as enemies of the people, Detective Chip Christopher walks the blurred blue line between racism and due diligence in order to do his job. And right now it’s his job to investigate Turn, a young black man with a sketchy past—who was previously exonerated of a similar murder.