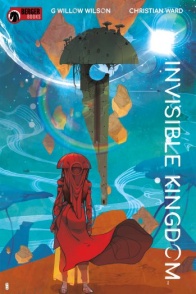 Dark Horse have announced at The Hollywood Reporter that G. Willow Wilson (“Ms. Marvel”) and Christian Ward (“Black Bolt”) will launch “Invisible Kingdom” as part of its ‘Berger Books’ imprint. The comic will see Wilson write a creator-owned book for the first time since her Vertigo series “Air,” which Karen Berger edited, ended in 2010.

The book will follow two women, in a far off galaxy, one a fighter pilot and the other a religious acolyte. Together they will uncover a galactic conspiracy, connecting the galaxy’s most dominant religion and its largest corporation.

Wilson said of the project, “It’s a delight to be working with my mentor Karen Berger once again, especially on such an exciting project.” Christian Ward, a first-time collaborator with Wilson, added “I’m thrilled not only to be returning to a big creator-owned sci-fi but to be working with Karen Berger and G. Willow Wilson. Karen’s amazing career has helped to shape me as a creator, and with Willow, I don’t think there’s anyone today who writes with more warmth, humor or humanity. Nobody writes better, more relatable characters than her!” Ward continued his praise and said, “We’re already buzzing with excitement about all the weird and wonderful places that we’re taking this whole new assemble of instantly lovable characters. I hope you join us as we go somewhere amazing.”

“Invisible Kingdom” is set to launch in March 2019, and more information about the series will be revealed during the “Berger Books: The Second Wave” panel this Friday at San Diego Comic Con.