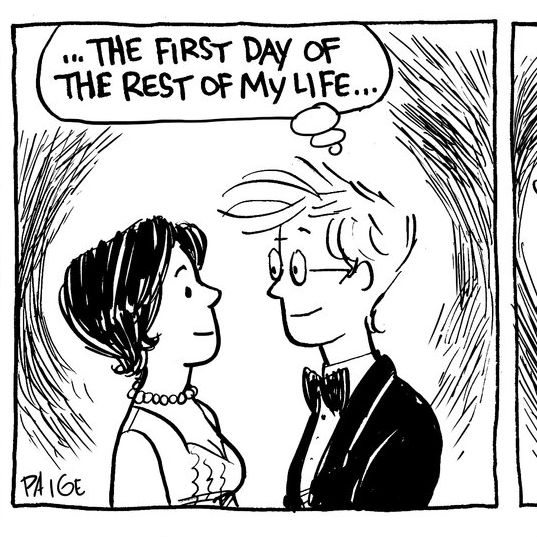 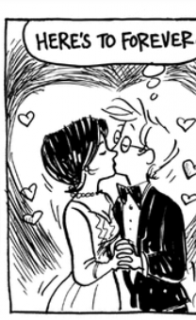 The long running comic strip “Jane’s World,” by cartoonist Paige Braddock, came to an end today with a marriage that would have once been more controversial. In the finale, protagonist Jane Wyatt marries Dorothy, who she has dated on and off for years, ending with the quote “Here’s to Forever.”

For the last twenty years Paige Braddock has been chronicling the life of Jane Wyatt, which originated as an earlier webcomic, “See Jane,” in 1995. In a phone interview with The New York Times about the ending of the current strip, Braddock said “When I started the comic, two women could not have been married; it would have been pure fiction… This shows how much has changed for the L.G.B.T. community in 20 years. It’s sort of staggering.”

In the ‘90s, Braddock’s strip faced rejection from publishers for her decision to tell stories that went outside the “gender specific” topics of kids, husbands, bathing suits and family that were seen as the place for women’s cartoon strips. She also said that “mainstream newspapers considered ‘Jane’ too radical” and that she sometimes thinks she “was 15 years too soon.”

After finding success getting into print in some alternative weekly papers and getting a tryout in the Atlanta Journal-Constitution, Braddock got her big break when Amy Lago, then Charles M. Schulz’s editor at United Feature Syndicate, contacted her. Lago was working on starting an online comics syndicate and thought “Jane’s World” was “worth a try.”

Braddock didn’t rule out revisiting her characters in a future strip. “Maybe five years from now, I’ll jump back and see where they are,” she told the Times.